The weather for the home fixture with Tynedale is almost always atrocious and again the Threshfield microclimate didn’t disappoint; although this year the travelling support could leave their skis and snow-boots at home and pack facemask, flippers and snorkel!!

These two teams faced each other in the Northern Pilot league, a competition that Wharfedale have won every year since its inception and with their impressive form this season the men in green had high hopes of a victory. However, Tynedale had other ideas and came out narrow winners in a game played at full tilt in rain that fell full pelt for eighty minutes. In conditions like these the result usually comes down on the side of the team that gets the basics right and makes fewer mistakes. This match was no exception. Both sides played with passion and effort, often spending long periods of time in close quarter defence in their own 22 metre areas and for most of the game the defences held sway.

The game opened in promising fashion for Wharfedale with a series of drives that took them deep into opposition territory but a dropped ball, turnover and missed tackles meant Tynedale escaped down the blindside and scored the first try after only 5 minutes.

Although Wharfedale had the majority of territory and possession they struggled to combine phases of play with fluidity. The green’s scrum was dominant but the lineouts were edged by Tynedale and the breakdown areas were pretty even. If this was chess it would have been a very muddy stalemate for most of the first half. 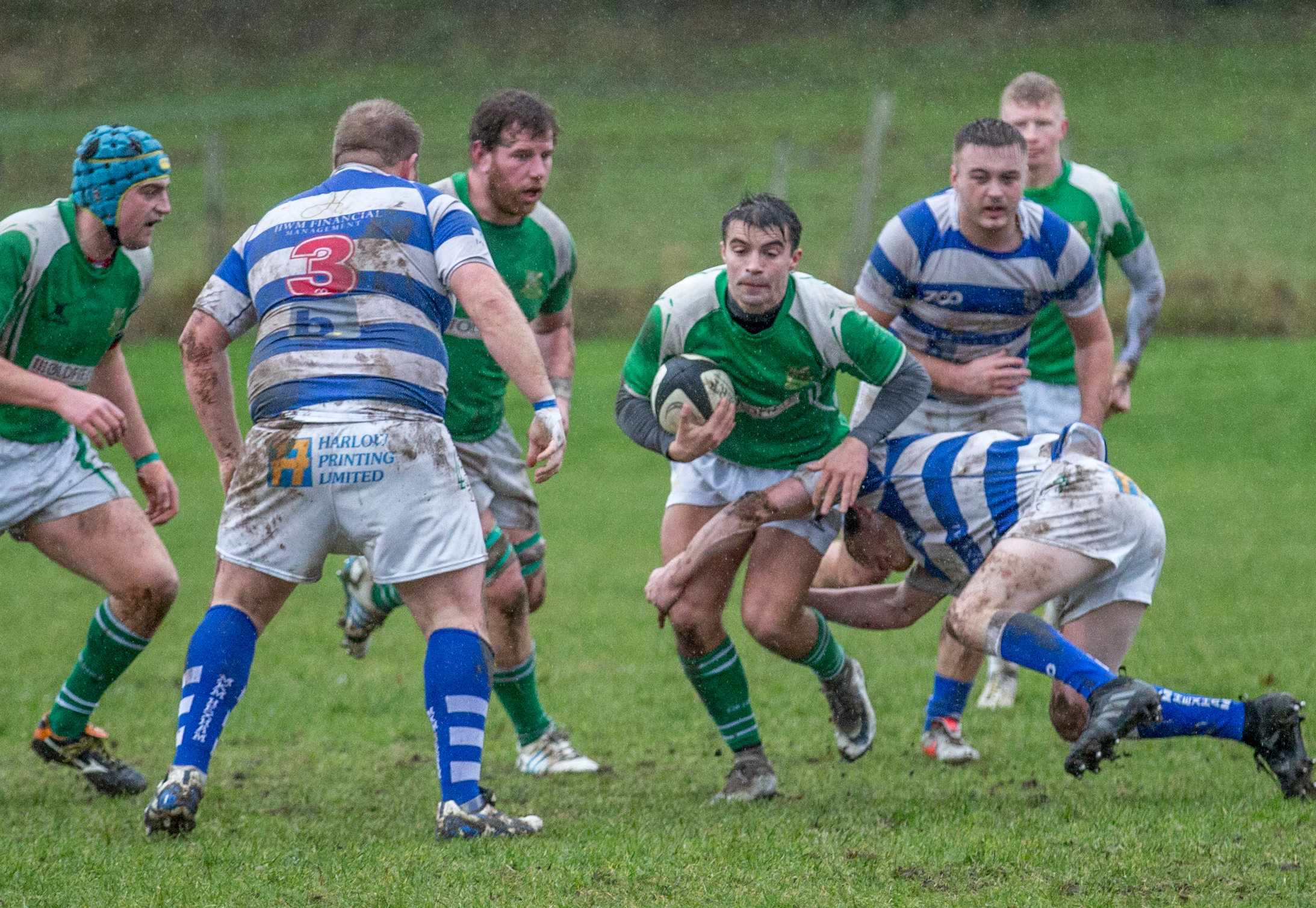 Action from the Tynedale match

Tom Mann at full back did manage to show his paces on an several occasions; solid under the high ball he always seemed to break the first tackle and make yards. It is one of these breaks that led to possession deep in the Tynedale half and a spectacular cross-field kick by Will Bell gathered by Eddie Gill who manged to dance his way round the covering defence to score. His try was converted by Rory McNabb to give Wharfedale a 7-5 lead at half time, and with Max Bell yellow carded with only a couple of minutes to go they had little to show for their efforts and would start the second half with fourteen men.

The second half was again keenly fought but errors began to dog the Foresters and they had the proverbial bad day at the office. Kicks to touch were missed, passes were dropped and attempts to run the ball from their own 22 metres meant they were pinned to their try line for long periods of play and couldn’t gain any territory. Tyne kicked to the corners at every opportunity and time after time the green wall stood firm but something had to give and it did, a yellow card to Jack Wells (who knows what for??) and the visitors eventually forced their way over from close range for a converted try. 12-7 to Tynedale.

The restart gave Wharfedale territory and breathing space which they quickly made use of with a penalty kick awarded which Rory Mcnabb duly converted. 12-10 to Tynedale.

The visitors again had a period of pressure on the Wharfedale try line and again dogged defence kept them at bay. This time when awarded a penalty Tynedale ignored the corners and went for the posts. 15-10 to Tynedale.

Again the re-start re-energised the Foresters and desperate to protect their 100% record this season they pounded away at the Tynedale try line for the final ten minutes but couldn’t find the moment of power or creativity that could have made the difference. The Tynedlae scrum-half was a relieved man when he kicked the ball off the field to end the game.

This was a good old blood and thunder Dales derby with Tynedale just about deserved winners. Wharfedale will rue their indiscipline, basic errors and lack of game management at the start of the second half but these are all lessons that can be learned and improved upon. Wht was never in doubt was their work rate and commitment.

As we watched the first team finish their match with an equally gritty win over the Tynedale 1st XV the Foresters captain, Tom Whyte, summed it up neatly, ”We were our own worst enemies and know we made too many errors but it’s over now, let’s move on.” Indeed.