The kick off was delayed by 20 minutes as the referee encountered traffic problems on the way to the game but Wharfedale came out strongly with Ben Leacock making a surging break in midfield. Unfortunately he picked up an injury shortly after and had to leave the field.

The early Dale pressure resulted in a Blakeney-Edwards penalty to give the visitors a 3-0 lead. Although the Greens were enjoying territorial advantage, a succession of penalties enabled Huddersfield to gain a foothold in the game, resulting in a penalty for Milner levelling the scores.

Wharfedale regained the lead when a 40 metre break from jack in the box, Matt Speres, and a subsequent conversion by Blakeney-Edwards, made it 10-3. That lead was stretched further when, after a break and exquisite chip kick, McNab crossed under the sticks. The conversation made it 17-3. 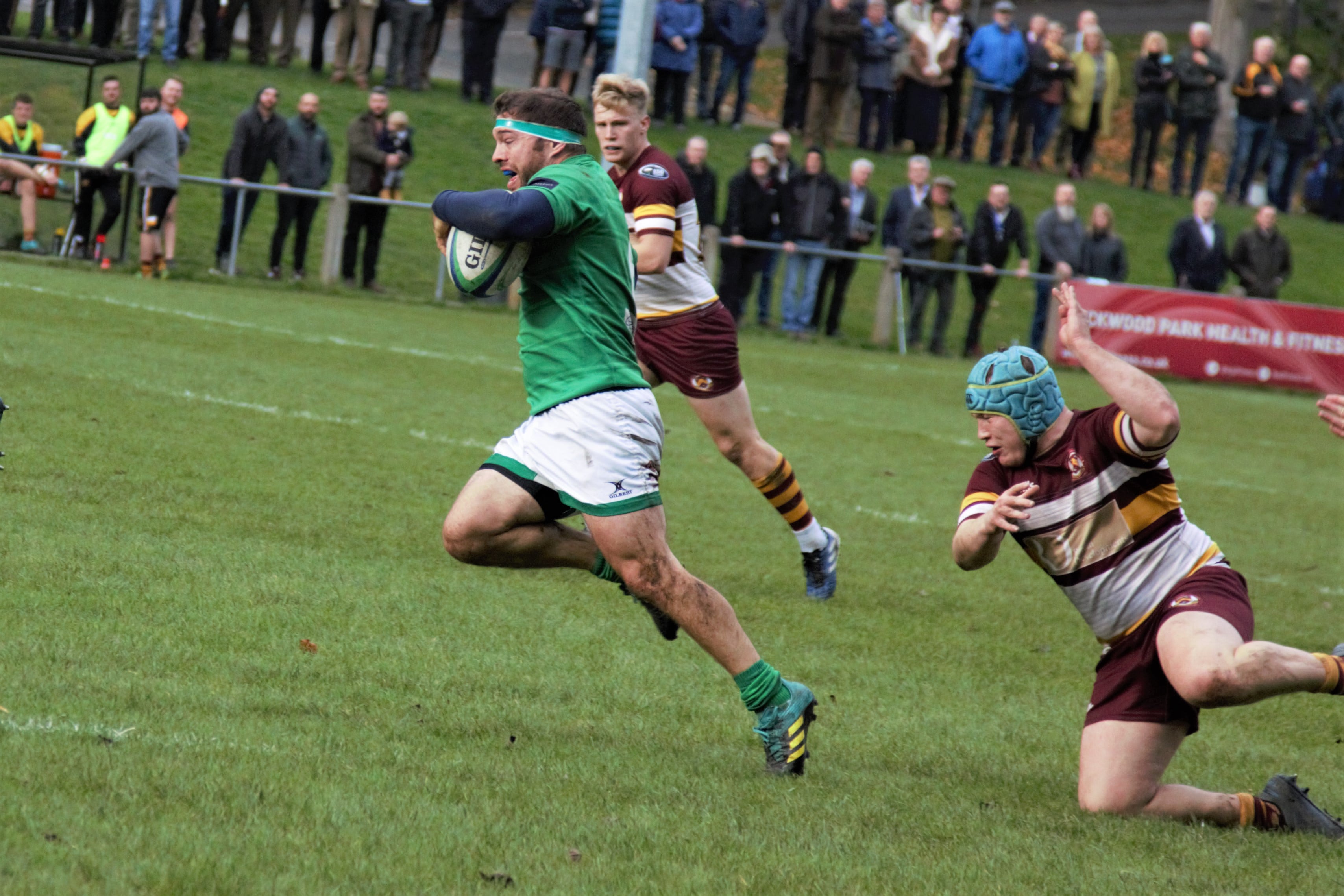 Matt Speres runs in for his try

Further indiscipline from the visitors saw Field back in Dale territory. A line out followed by a driven maul saw Battye cross the whitewash. The Huddersfield bandwagon continued to roll and, after Wharfedale were forced to carry over their own line for a 5metre scrum, Huddersfield captain Piper scored to make it 17-13 going into the break.

As in the first half, Wharfedale came out strongly for the second period and, after good strong runs from Beesley, Prell and Cicognini, Blakeney-Edwards scored wide out to make the score 22-13.

Once again Huddersfield came back strongly and stoic Wharfedale defence was finally broken when Parfitt crossed for a try. The conversion made the score 22-20 and with half an hour still the play the game was in the balance and there for both sides to take.

In a game that continued to fluctuate and ebb and flow it was the visitors who next troubled the scoreboard. Good play by both backs and forwards created an overlap for Cicognini to score in the corner. The bonus point secured and a 27-20 lead gave the impression that Wharfedale were taking control of proceedings but a yellow card for Will Smith saw the numerical advantage swing back to the hosts. The resulting penalty took the scoreboard to 27-23.

With Dale utilising their replacement bench to the best possible effect, a high shot on Gaudie saw the numbers being evened up as Bradley saw yellow and, just to rub salt into the Huddersfield wounds, the ever reliable Blakeney-Edwards extended his side’s lead with a long distance penalty shot. He repeated the feat shortly after when Dale gained the referees favours and another penalty was added.

With the whole team performing to the highest standards it came as no surprise when a stolen line out ball resulted in an inch perfect crossfield kick to see Cicognini rise above the opposition to claim his second try. The touchline conversion from Blakeney-Edwards made the score 40-23.

Once again the never say die attitude of the home side came to the fore and they crossed for another converted push over try to make the final score 40-30.

Coach Jon Feeley was loathe to pick a star man at the final whistle but did concede that, in a consummate performance from all 20 players, Jonny Moore, Matt Speres and youngster Will Smith were outstanding throughout. However his award went to Jack Blakeney-Edwards for his continual prompting, intelligent kicking in open play, and also a 20 point personal haul. 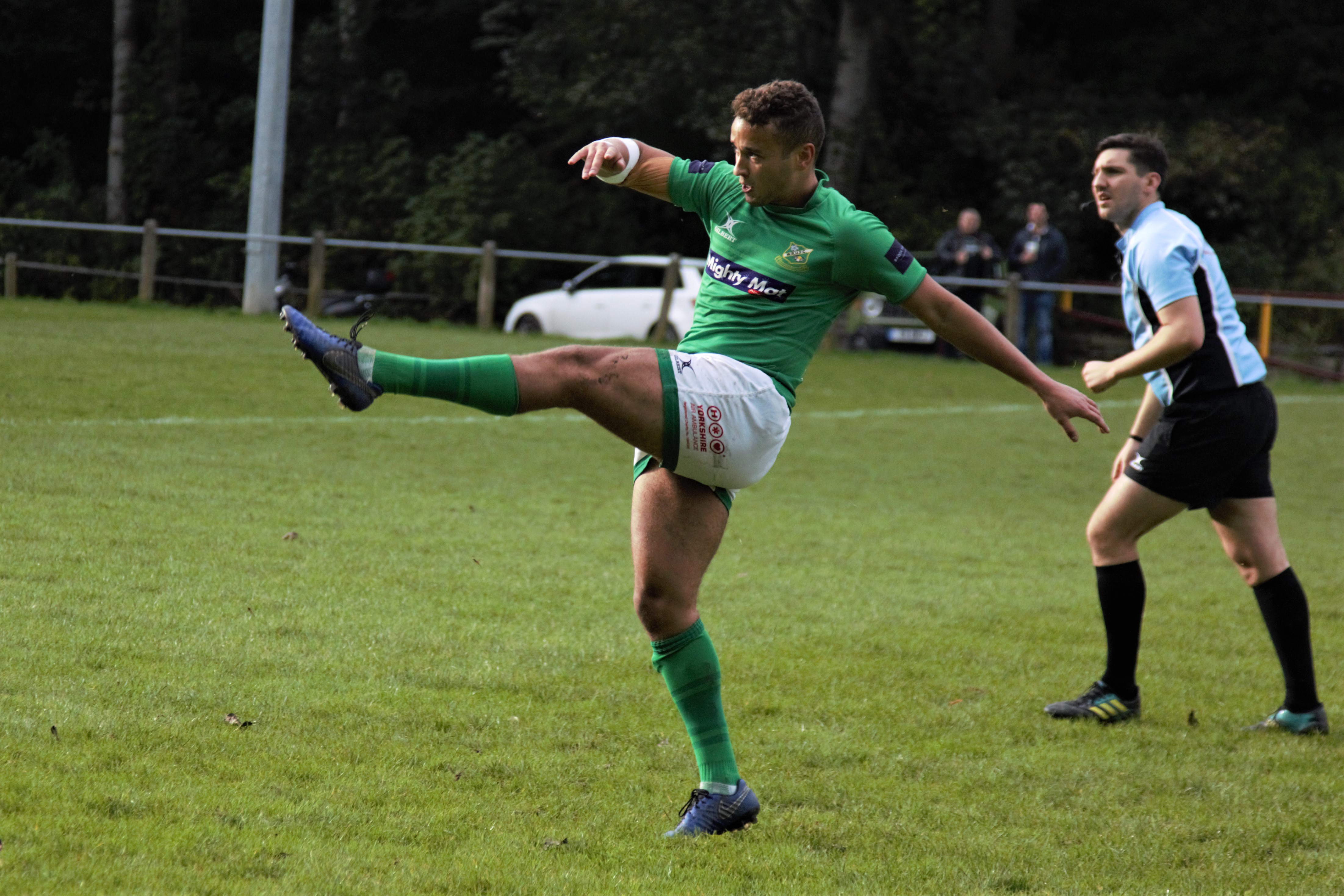 Jack Blakeney-Edwards (man of the match)

Special mention must be made to stand in skipper, Dan Stockdale, who never took a backward step and marshalled a very youthful pack, Director of Rugby Rob Baldwin aside, with aplomb.

Our thanks to Sue Gaudie for the photographs.