A strong performance from Hinckley saw them take 5 points away from home and break their losing run on the road. They were too strong for a sometimes lacklustre Wharfedale team who only started playing in the last quarter of the game. Even when the visitors were reduced to 13 their defence kept Wharfedale out.

Wharfedale did start well but mistakes let Hinckley escape from their 22. Hinckley could not make progress despite going through the phases. When they had the ball in midfield they went through 12 phases without denting the Green line. The possession ended when Ben Sowrey forced a turn-over. After 7 minutes Dale opened the scoring when Harry Bullough collected his own charge down to cross under the posts. Jack Blakeney-Edwards converted.

The next 15 minutes saw Hinckley gradually getting stronger and gaining the upper hand. They got on the scoreboard with a penalty try awarded when a high tackle from the last defender stopped a try. Rian Hamilton was shown a yellow card for the tackle. 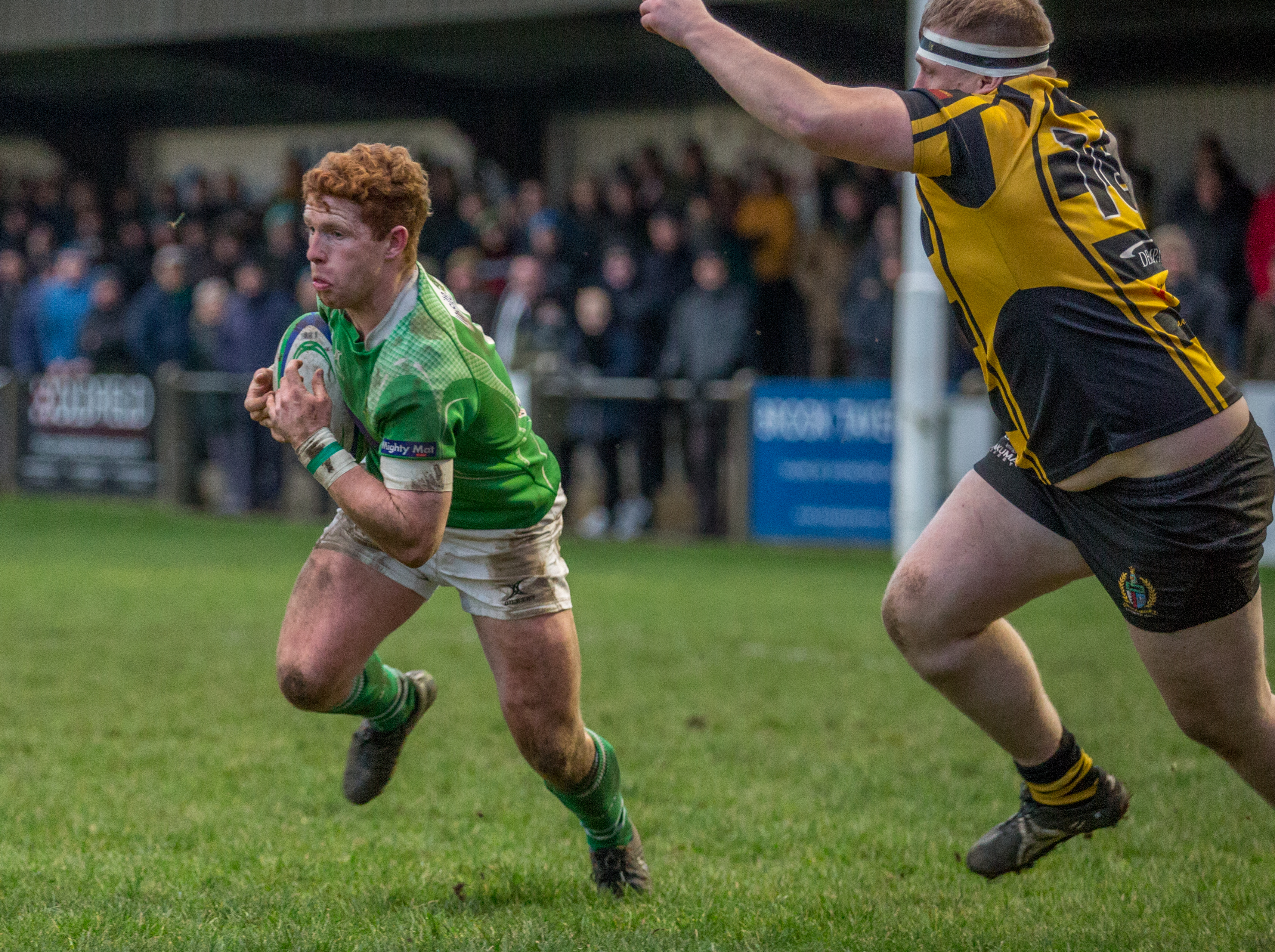 Blakeney-Edwards converted a penalty and Dale were soon on the attack again. A scrum penalty led to an attacking line out in Hinckley’s 22. The catch and drive was successfully disrupted by Hinckley and when the ball was spun to the right possession was lost and Hinckley ran the ball up to half way. A good kick ahead led to a poor clearance from Wharfedale and Hinckley’s full back counter-attacked. Using the space of a very broken-field Joe Wilson ran a superb line before slipping the ball to Jamie Skerritt who ran in from Dale’s 10 metre line. Wilson added the extras.

Rian Hamilton returned for the restart but George Hedgley was sinbinned almost straight away so Dale were still playing with 14 men.

Hinckley ran in another try from a Wharfedale put in at the scrum. The ball bounced to the visitors from the put in and they quickly moved the ball to the left wing. Callum Dacey had the speed to outflank the defence and cross the whitewash for an unconverted try.

Wharfedale ended the scoring in the first half with an unconverted try from Joe Altham. Sam Gaudie gathered a loose ball from a Dale line out and burst clear. The pack arrived quickly and the talented Hinckley number 8 was pinged for not rolling away. Blakeney-Edwards sent the perfect ball into the corner for a five-metre line-out. With Dale camped on the line a penalty advantage was called, surely this must have stopped a try being scored and see Mr. Taylor deal with the situation as he had with Dale earlier on. A phase later Joe Altham crashed over. A missed conversion left the score at 15-19 at half-time.

Hinckley then set up camp in Dale’s 22. The Hinckley front row got away on more than one occasion at the scrum with the ref deciding that both front rows had stood up! From such a scrum Hinckley scrum half Joe Glover darted over for a converted try.

Dale were not at their best but at 15 – 24 they were still in the game. Then Dale hit the disaster button. A super kick return from Oli Cicognini got Dale in Hinckley territory but a long, floated pass was easily picked off by winger Dacey who shrugged off two cover tacklers on his way to his second try of the afternoon. Wilson converted.

The Hornets stayed in Dale’s 22 for the next few minutes but eventually a knock on and a couple of penalty decisions in Wharfedale’s favour took the home side into opposition territory. Penalty followed penalty and eventually on 63 minutes Ryan Hough was sent to the bin. A poor line-out let Hinckley escape but they soon gave away another penalty. Back went Dale into Hinckley’s 22. This time the catch and drive worked and Dale were driving to the line when it was cynically pulled down 4 metres short. A penalty try – no, just a yellow card for Ben Marshall – job done. The ref’s explanation was, despite driving forwards for 14 metres already and with the green machine still going forward, ‘it was not going forwards clear enough for a penalty try’!

Then came more frustration. Dale did not opt for the scrum but went for the corner. Hinckley did not initially compete at the line out and Richard Rhodes claimed the ball and held it at the front. The ref shouted use it then changed his call. The Hinckley number 5 then went to ground and any drive was checked! The ref ignored this and Dale had then to use the ball and unfortunately knocked it on in midfield.

The next line out. Still inside Hinckley’s 22, saw Dale again keep the ball at the front without Hinckley engaging. Again, the cry of ‘use it’ was heard. Hinckley then pushed Dale back to the moderate safety of their 22. A poor Wharfedale line out and a penalty took the visitors in to Dale’s territory and welcome relief.

The respite did not last long and a Wellock run soon had Dale on the attack again. With the penalty count mounting Dale were kept away from the line. Liam Hamilton was obstructed after he chipped towards the line. Hinckley’s Mitchell Lamb replaced Marshall in the sin bin. The following line out led to another catch and drive and yes, pulled down short of the line and a penalty – no further sanction as Mr. Taylor did not have a number!

With 78 minutes on the clock Dale finally got the score they deserved. George Hedgley rumbled over but it was too little too late.

Wharfedale finished strongly but resolute, some would say totally cynical, defence from Hinckley restricted them to a single try.

Maybe a fantastic game for the neutral (are there any?) to watch. A game to forget – certainly not. A lot of heads went down after the match, including your humble scribe. Now that time has healed the pain of losing in such a manner, the pain of not even getting any bonus points, the pain of dropping to fourth from bottom we need to gather the club together and look forward.

As our venerable President said after the match “There were many positives to take from that match”. Many other of the faithful told me to write it as it was and some of the comments were not very flattering about Dale’s performance. After a sleepless night and with the benefit of watching the video the scribbler was finally in a more positive mood.

I have great confidence in this team. I have great confidence in the coaches. We have had worse games than this and still kept the faith. There were some excellent performances at times. The problem was that there was a lack of continuity in the play. I cast my mind back to that 36 minute purple patch in the second half away to Chester. The whole squad was playing from the same script. The rugby was divinely simple but so, so effective.