Dale dominated the first half and did enough in the second half to bag an important 5 point win away from home.

Dale had the upper hand early on and very quickly had the Lions struggling in the scrum. After stealing a line out on Peterborough’s 10 metre line, Will Edwards pinned the Lions back in their own 22 with a weighted grubber kick, and then the follow up quickly produced turn over ball, which led to George Hedgley crossing for the first try. Edwards knocked over the conversion.

Peterborough attacked from the restart. They regathered their kick off and could have scored, and strong running and support play took them close, but after 10 phases Dale forced a decision and were able to clear with a penalty. The Greens then moved up a gear and Peterborough could not cope with the level of play. Penalties followed and eventually led to a yellow card for Shaquille Meyers for killing the ball. Although they were in the shadow of the posts Dale opted for the scrum. Well done to the Lions pack who actually (for the only time in the match) got a nudge on. It was to no avail as Dale spun the ball to Josh Prell who crossed wide to the right. Edwards just missed the kick. 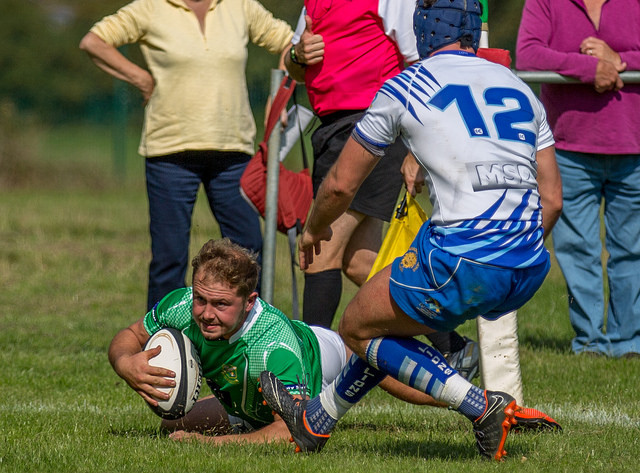 The Green Machine was purring and the home side were put through the mill in defence. The next try came from an uncontested catch and drive. More intelligent play from skipper Richard Rhodes meant Dale were almost over the line before Peterborough tried to stop them. The effort came too late and Dan Stockdale was awarded the score. Edwards added the extras.

Half time came with Dale leading 19-0.

Dale kept up the good work at the start of the second half and were rewarded with a penalty try. Lion’s prop, Josh Waller, earned a yellow card.

This seemed to have a dramatic effect on the home side and they started playing with more intensity and passion. They were rewarded on 50 minutes with an unconverted try from Ali Lea. They were soon back in Dale’s 22 and seemed to have an excellent opportunity to score. A missed tackle allowed Peterborough to stream forward and when the ball was moved left there was a pride lining up to score but a handling error meant the opportunity could not be developed.

Good periods for both sides followed without either line being threatened. A 30 metre driving maul from Dale, a break out by the Peterborough backs and some good cover tackling from Phil Woodhead and others.

The introduction of Argentinian scrum half, Franco Perticaro, meant that Peterborough were now moving around the pitch with greater urgency. Penalties were quickly taken and this led to a break by winger, Rory White. Will Nankevil was on hand to score with Ben Young converting.

With the clock running down Wharfedale closed out the game and secured the valuable 5 point win. It is the first time Dale have won the opening match of the season (home or away) since beating Hartpury away by 25-30 in 2014.

A great day in the sunshine for the travelling faithful. The pack was awesome even though they got pinged for two free kicks and a penalty! The new coaching staff (your scribe keeps forgetting that Jon Feeley has visited the Avenue before) were very pleased with the performance and very pleased with the new players who have fitted in.