On a dry warm day at the Avenue a good crowd was treated to a great game of rugby with both sets of players committed to moving the ball around. It was an exhausting pace and Wharfedale seemed to last in the conditions better than the heavier Stourbridge side.

Stour went in at half time with a six-point lead thanks to outstanding play from the back three. Wharfedale dominated the opening exchanges but could not get across the try line. The best chance was from a quick tap and go penalty by Phil Woodhead but the move broke down and Stourbridge escaped.

Stourbridge then got possession from a poor Dale line out and they opened the scoring with a sweeping move right. Mark Harrison received the ball on the half way line in space. He had the speed and power to beat the cover for a well taken try. Chris Scott missed the difficult conversion.

Dale were guilty of too many errors in the first 20 minutes. Plenty of good possession was thrown away by handling errors or mistakes in the line out. Dale’s dominance at the scrum managed to salvage the situation and a penalty was awarded on a Stourbridge feed. This time Dale took the three points on offer to get on the scoreboard. This was repeated on 32 minutes and Blakeney-Edwards nudged Dale into the lead 6–5.

Dale extended their lead when a kick into space by Blakeney-Edwards bounced back into Louis Brown’s hands and the speedster had a clear run under the posts. Blakeney-Edwards slotted the extras.

Stourbridge finished off the first half in some style. George Morgan took full advantage from close range after some loose play and Scott landed the conversion. Good play by the Stour backs set up Dan Rundle to touch down on the stroke of half time and Scott’s conversion gave them a 13-19 lead.

Wharfedale came out for the second half and soon grabbed hold of the game setting up camp in Stour’s 22. Eventually, after 18 good phases the pressure told. The Stourbridge defence worked hard to hold their line but when Dale were awarded a 5-metre scrum they really struggled and the Green Machine were soon awarded a penalty try.

Dale carried on playing well supported phase rugby utilising the forwards and the backs. A Blakeney-Edwards cross kick was taken by Oli Cicognini and more pressure asserted on the Stour defence. Tatenda Mukarati rescued them and forced a turn-over penalty and the visitors cleared to half way. Good line out ball was spun long and had Rundle speeding in for his second unconverted try.

Wharfedale’s backs then showed their pace with good hands setting up a converted try for Will Edwards. Rian Hamilton collected a kick in his own 22 and raced up to half way. Hamilton had Louis Brown in support who gave the scoring pass to Edwards.

Will Lawn added a bonus point converted try from close range after the Dale forwards had battered the Stour line. 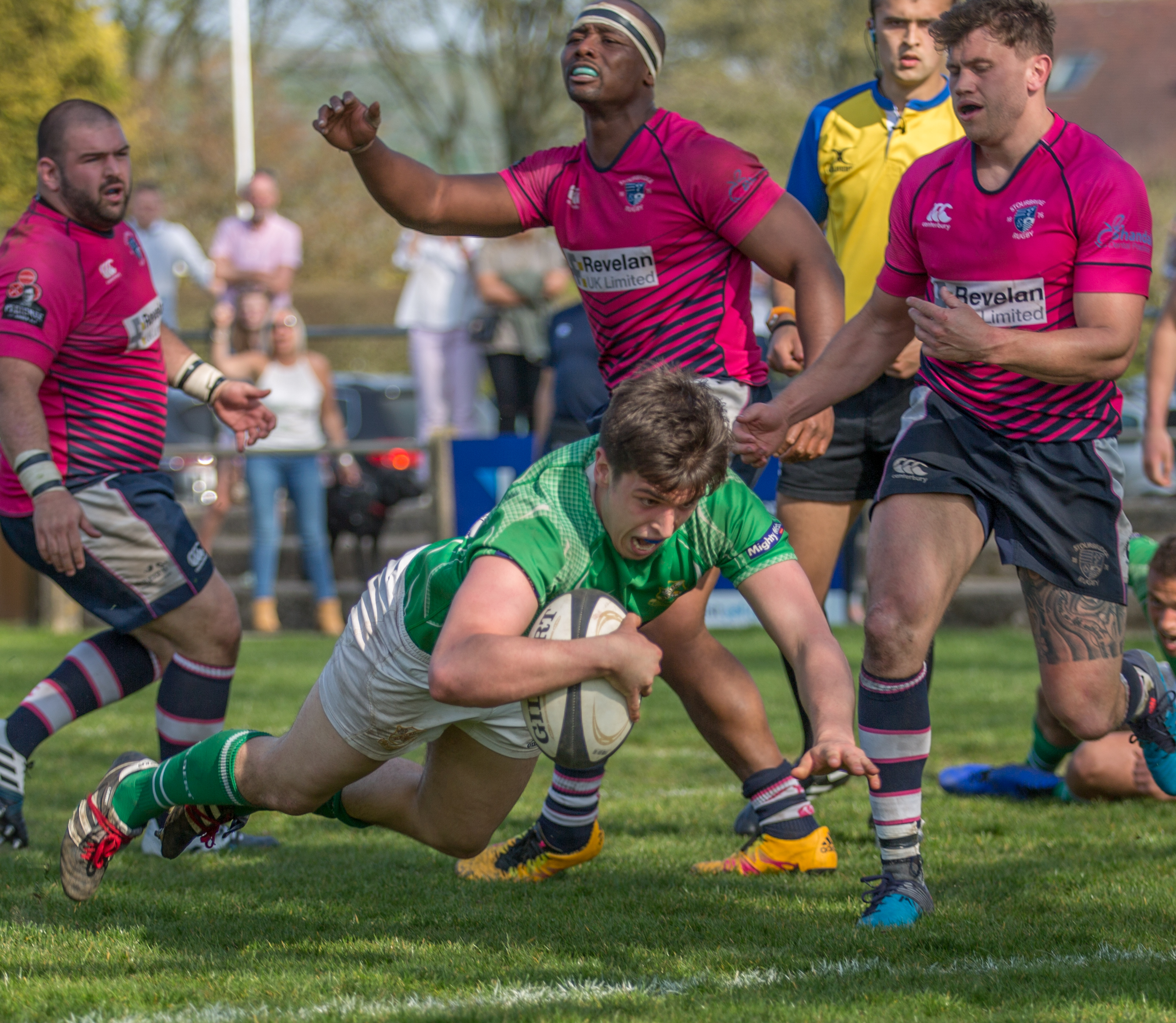 Will Lawn goes over

Blakeney-Edwards added two penalties for Wharfedale to finish the scoring. Both penalties were won for illegal tackles on Louis Brown who was paying for causing the Stourbridge defence problems. The first one earned Stourbridge’s Jo Heatley a yellow card.

Stourbridge coach, Neil Mitchell, said after the game that it was “a great game of rugby. We were let down by some decisions but Wharfedale thoroughly deserved to win the game.”

Jon Feeley, the Wharfedale Coach commented “I am a very proud coach; I thought the effort was outstanding. Our decision making was excellent. There were key points in the game when we were under pressure but relieved it with intelligent choices. They had a dangerous back three which we eventually nullified.”

Star man in the Rugby Paper went to Jack Blakeney-Edwards. This was not just for the 16 points he contributed from the tee. His all-round performance was outstanding. He controlled play, keeping the defence guessing with a mix of running, passing and kicking. His kicking game was a delight, often putting the ball into space and turning the defence. The bounce back for Brown’s try was a bonus but I am reliably informed that this was a well-rehearsed move. He also tackles anything that comes his way as well.