With results elsewhere going in Dale’s favour the 5-point victory sees them finishing 8th in the table.

With a strong wind and rain blowing through this was never going to be a pretty game. Both sides did try to entertain but it was Wharfedale who managed the conditions better and scored 5 tries whilst keeping the visitors well away from the try line.

Wharfedale opened strongly and Jack Blakeney-Edwards soon pinned the visitors back with a good length clearance kick. Matty Houghton was in the follow up group and soon stripped a Lion of the ball and set off into the visitor’s 22. Slick handling and running nearly allowed Oli Cicognini to touch down but alas his final scoring offload went to the wrong coloured shirt and Peterborough were let off.

Dale opened the scoring after 5 minutes with a well drilled catch and drive that ended with Matty Houghton crashing over. Jack Blakeney-Edwards could not convert.

Following a mistake by Dale from the restart the visitors had some meaningful possession in Dale’s half. They had six phases of play but could not make any progress and were forced into touch near half way. Dale’s clean line out was soon followed by good phases. Houghton was again the main ball carrier and he surged up to Peterborough’s 22. Dale’s second try came, four phases later, from a weighted grubber kick from Harry Bullough and Rian Hamilton touched down to score. Again, Blakeney-Edwards missed the conversion.

Dale were soon back on the attack and even a faltering line out could not stop them. From an attacking Wharfedale line out outside the Lions’ 22 Peterborough won the ball. The pressure from Dale was so intense that three phases later they were forced back into their own dead ball area for a Wharfedale 5 metre scrum. Mistakes by Dale, and giving away penalties, allowed Peterborough to briefly get into Dale’s 22. A towering kick soon followed from Blakeney-Edwards and Peterborough trudged all the way back into their own 22. The Lions then roared as their pack started a 30 metre catch and drive – perhaps the visitors’ best moment of the afternoon. Sadly, it was only started from inside their own 22 and when they moved the ball James Tyson forced a turnover and back they trudged into the 22. A handling error gave Peterborough the put in at the scrum but the Green Machine were rolling and won a scrum penalty.

Wharfedale’s 3rd, again unconverted try, came from the resulting catch and drive with George Hedgley barging over to score. 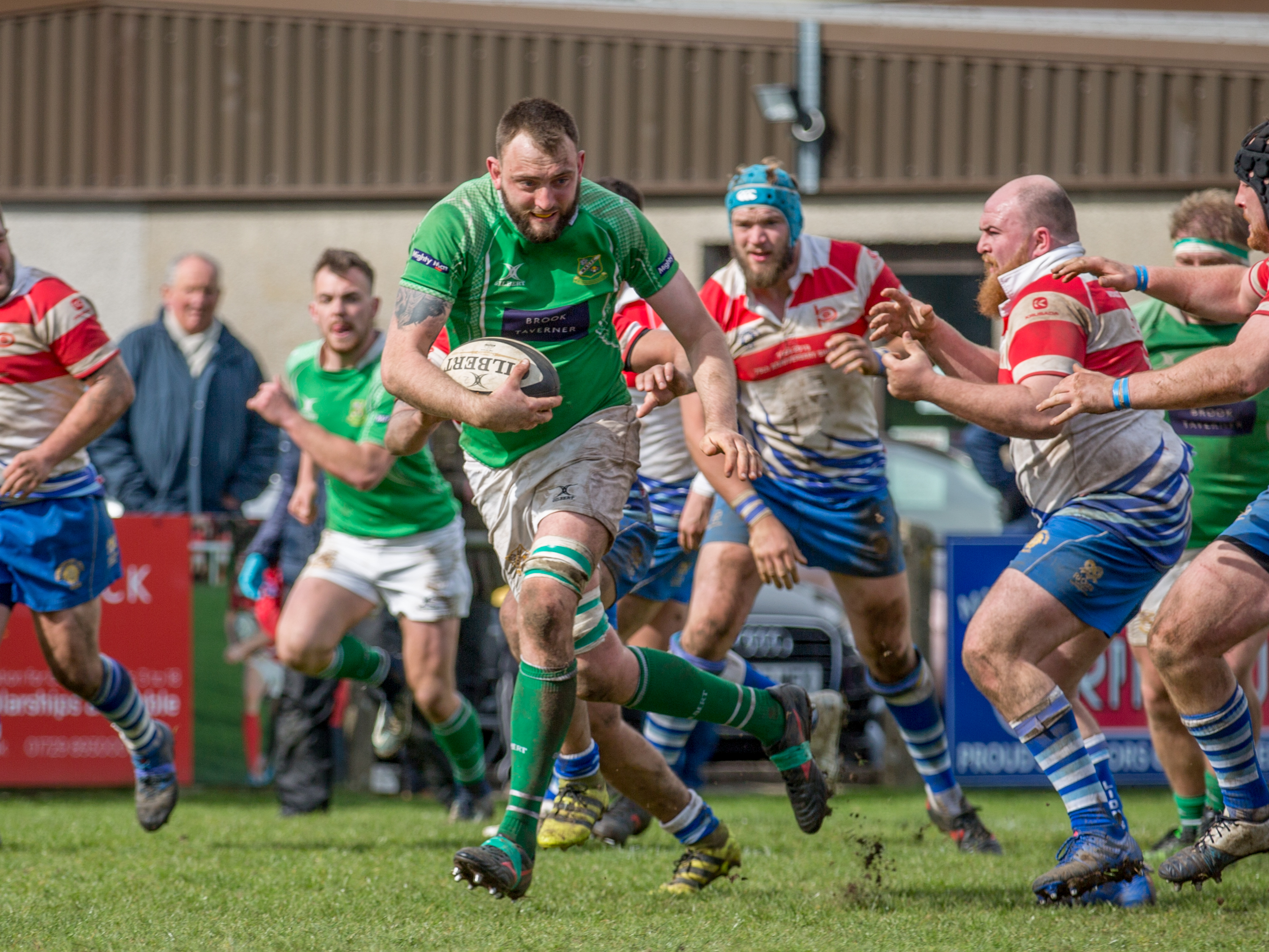 There then followed a very scrappy period of play when Wharfedale seemed to ease off. Peterborough could not capitalize and although they finished off the half with plenty of possession, they could not make progress. The last minutes of the half summed up Peterborough’s afternoon when they went through 20 phases, starting in Dale’s 22, which ended when they forced into touch.

The second half started with more Peterborough possession and this time they managed to advance to within 12 metres of Dale’s line. Wharfedale then worked the ball clear before a superb break by Tom Mann took play down field.

The action flowed from side to side for a while with the small Lion’s contingent in the crowd cheering any small victory on the pitch but they could never threaten to score.

The highlight of the second half was a combination move. A charge from prop, Reece Ward, was followed with an intelligent offload and a surge forward by Ben Leacock who was only stopped metres short of the line.

Wharfedale’s fifth try was created by a charge from Rob Baldwin into the Lions’ 22. His offload allowed Will Lawn to scamper under the posts. Blakeney-Edwards added the two points to give Dale a convincing 29-0 victory.

Wharfedale Head Coach, Jon Feeley, commented after the game that “the circumstances and conditions made it hard to play fluent rugby. To nil any team at this level showed commitment and attitude and the Green Machine kept playing until the end of the season”.

Joe Altham was among many for the Man of the Match award. The Boss (Rob Baldwin) had another strong game and many commented that it is good to see him back to his best. James Tyson was a constant threat at the break down. All the backs contributed with strong running, handling and good defence. The front row was again dominant and their ball carrying also contributed to Dale’s dominance of possession and territory. The engine room of Hedgley and Leacock worked tirelessly all afternoon.

All the replacements were used and there was no let-up in Dale’s dominance.

Hats off to Peterborough Lions for competing and making it difficult for Wharfedale. They battled hard for no reward but hopefully enjoyed their 1st visit to the Avenue.

Comment of the Day – When Joe Altham picked up the ball 10 metres out from the try line and went off on his own; a certain ginger-haired scrum half muttered NO!

Sight of the Day – the members of the squad who had not scored this season doing a naked run and dive after the game. Sympathies for Jack Wells who only actually played for 6 minutes in the last game

Stats: – Wharfedale had the 3rd best defence in National 2 North with only Chester and Fylde having a better record.