Wharfedale put the blues of the last few weeks behind them and produced a strong, wholehearted performance to beat table toppers, Hull Ionians. There was a feeling around the ground that, even when Hull dominated for a period early on and went ahead 5-0, Wharfedale could win the game. Dale had to play with 14 men for most of the game after Matty Houghton was red carded but this seemed only to strengthen their resolve and dig deeper into their reserves and fitness levels.

All six tries were scored by forwards and Dale outscored the visitors by 4 to 2.

The opening few minutes showed that Dale were not going to bow down to their high-flying visitors. Toms Asejevs opened for Dale by stripping Hull’s first possession. Their second possession led to a charged down kick and a Wharfedale scrum on half way saw them drive the visitors back and forced the I’s hooker, Adam Brown, to stand up under pressure.

Hull eventually got hold of the ball with a penalty just outside their 22 when Richard Rhodes became isolated and 2 Hull defenders got over the ball and could not be cleared out. The visitors then worked the touch line with a series of catch and drives leading to penalties, eventually getting up to Dale’s line. More penalties followed and eventually a yellow card for Chris Walker.

Hull started the scoring with a catch and drive, David Laverick awarded the unconverted try. Hull tried the same tactic again and again but the Green line held and worked their way into Hull’s 22. Then came the moment, after 27 minutes of play, that should have cost Dale dearly. Matty Houghton was dismissed for “Match official abuse”. Hull’s penalty was kicked long into Dale’s half but with a towering leap from George Hedgley Dale claimed the line-out and won a penalty.

Hull had some possession but could not penetrate the determined Wharfedale defence and eventually Dale had good territorial position and started to keep Hull in their own 22. Penalties followed and tries were nearly scored when Dale moved the ball wide. It was however a series of catch and drives that Hull could not contain. The first drove the visitors back 15 metres and set up Dale deep in Hull’s 22.

Dale now gave Hull a taste of the catch and drive medicine that the I’s were dishing out earlier in the match. This led to a Dan Stockdale try, driven over with the backs, most noticeably, Ben Blackwell, joining in. Blakeney-Edwards slotted the conversion to take Dale into the lead.

Hull’s next attack led to a sloppy pass going into touch and Dale again soon had the upper hand. More Hull infringements led to a yellow card for Hull’s second row, Luke Makin.

At the next catch and drive Wharfedale, again with backs joining in, waltzed over the line with consummate ease. Blakeney- Edwards had two goes at the conversion after an early charge by Hull but the second one bounced off the upright.

Hull opened the second half by trying to move the ball wide. This was ended by Ben Blackwell who held up the attack and Dale had the put in at the scrum. The penalty followed with Will Edwards taking all the credit because he had become the eighth man.

Both sides started the second half with some open rugby with Dale gaining ground and camping in the I’s 22. A scrum penalty took Dale to the corner and another catch and drive led to Reece Ward touching down. Blakeney-Edwards added the extras to give Dale a 19-5 lead.

Hull got back into the game with some good possession when they managed to put their phases together using forwards and backs. The pressure led to a yellow card for Toms Asejevs on 62 minutes which reduced Dale to 13 men.

A clean catch and drive was easily turned into a try for Alex Forth. Lewis Minikin’s conversion made it a seven-point game. Surely Dale would now capitulate. The 14 men had fought hard and bravely but Hull now had a 2-man advantage. “Our strength cometh from the hills” is the Dale motto and it certainly came from somewhere. A solid scrum forced Hull to move the ball. A thumping tackle by Harry Bullough was followed by Ben Blackwell forcing a turn over. A clearance kick was followed up by a host of green shirts and Richard Rhodes forced a penalty for not releasing.

On 74 minutes sustained pressure from Dale saw Hull’s James Newman awarded the yellow and Wharfedale made the game safe with a bonus point try when Chris Walker scored after another catch and drive enabled him to break off and crash over. No conversion but a secure win and at last the faithful could cheer a good performance by the greens.

A massive cheer went up to greet the final whistle and the bar and the Avenue were soon buzzing with the faithful talking about a great match. If anyone doubted the resolve of this team then surely this performance answered any questions. 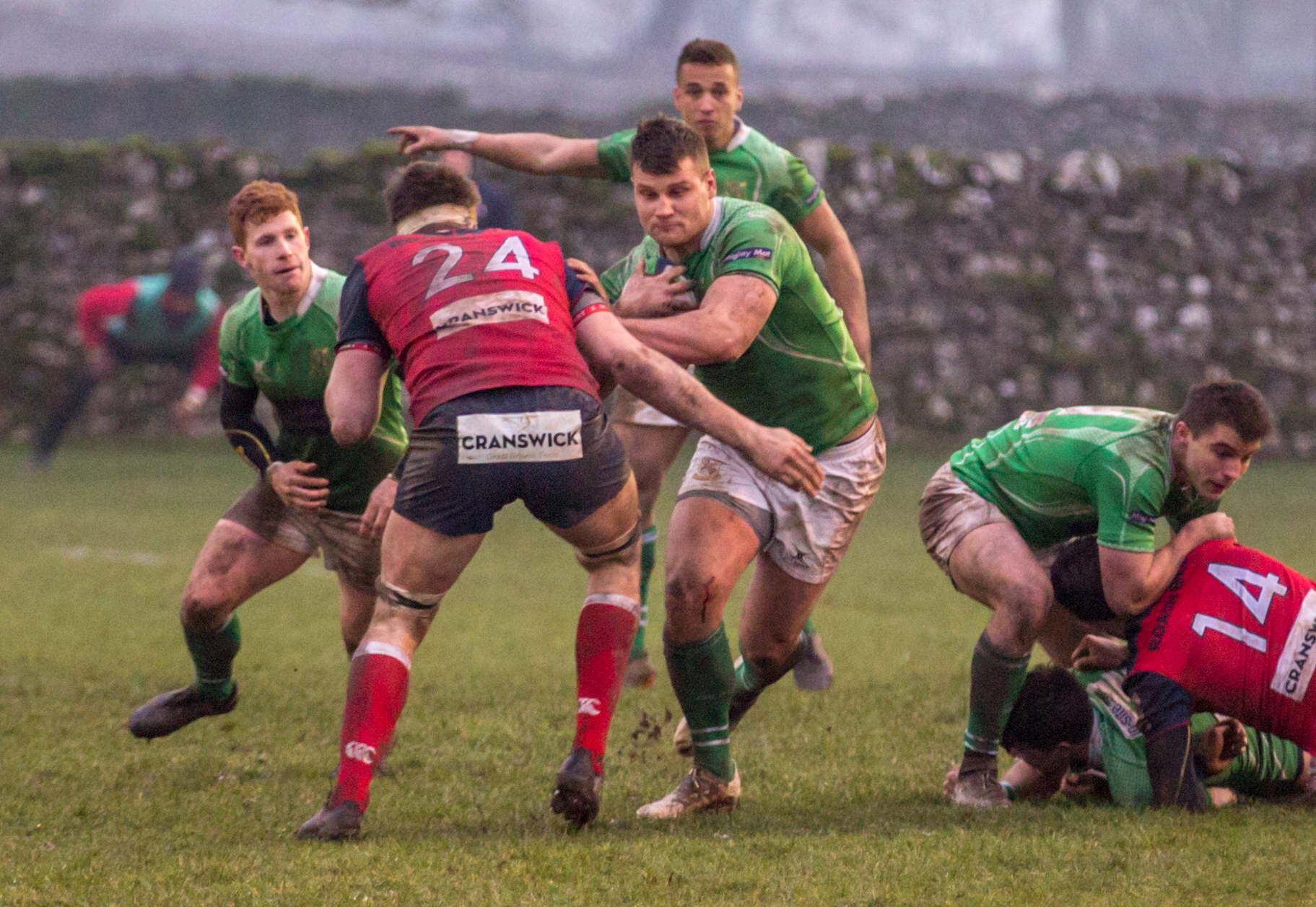 The Rugby Paper always want a name for the Star Man slot. After much discussion the award went to Ben Blackwell. There would have been little argument if the award had gone to anyone of the team. Blackwell inspired the backs into tackling anything that came their way. He was instrumental in turn overs and often joined in with the pack. Chris Walker and Josh Burridge were outstanding all afternoon. George Hedgley and Richard Rhodes dominated the line out. Dan Stockdale threw some great line outs and his pressure at the scrum saw the I’s hookers forced to stand. Toms Asejevs had a busy afternoon from the first turnover until he was replaced by Ben Sowrey who took over with more turnovers. Man of the set piece for many, (I will have to agree as he told me how fantastic he was!), was Reece Ward. It was good to see the scrum back to its best. 5 scrums awarded and 5 penalties!

The backs were solid. Neither set of backs were over used but Dale’s three quarters influenced the game with their resilience in defence. Sam Gaudie had a great game. Sniping away at Hull, tackling anything that dared to approach him and putting in some clever box kicks for Cicognini and others to chase.

It was good to see the boss (Rob Baldwin) and the apprentice (Joe Metcalfe) getting on to the pitch in the closing stages. They replaced Chris Walker and Josh Burridge who were given a loud ovation when they left the pitch.

Smiles all round; we need to bottle this performance and release it next Saturday afternoon when we take on TD’s team up at Preston.