Tigers roared again at the Avenue thanks to some sparkling play by their backs. The Wharfedale forwards were strong throughout the game but the Tigers were quicker and more clinical in the backs.

Wharfedale started strongly and three tries took them into a 19-point lead.

Sheffield Tigers were held in their own half from the kick off and forced to kick. Tom Mann collected the ball and set up quick ball. Two phases later Dale won a penalty which was taken quickly by Phil Woodhead. and Harry Bullough finished off the move. Jack Blakeney-Edwards converted.

Sheffield Tigers were awarded a penalty soon after the restart and when the kick at goal hit the upright, they regathered the ball and spent time in Dale’s 22. A forward pass ended this brief incursion, with the Wharfedale defence not really being threatened.

The Wharfedale eight won their first scrum penalty of the afternoon and Blakeney-Edwards sent the ball forwards 40 metres for a Wharfedale line-out in Tigers` territory. Two phases after the line out Wharfedale passed the ball into touch. Tigers won the set piece and swung the ball left and their dangerous backs ran the ball up to Dale’s 22 and won a penalty. Jo Duffy missed the relatively easy three points. Phil Woodhead ran out of defence and the promising break out was stopped by the referee who did spot a forward pass.

Dale were however handed back the ball as Duffy continued his woeful afternoon by dropping the ball. This pattern was repeated two more times. Dale’s forwards winning the ball back only to see a mistake by the backs. 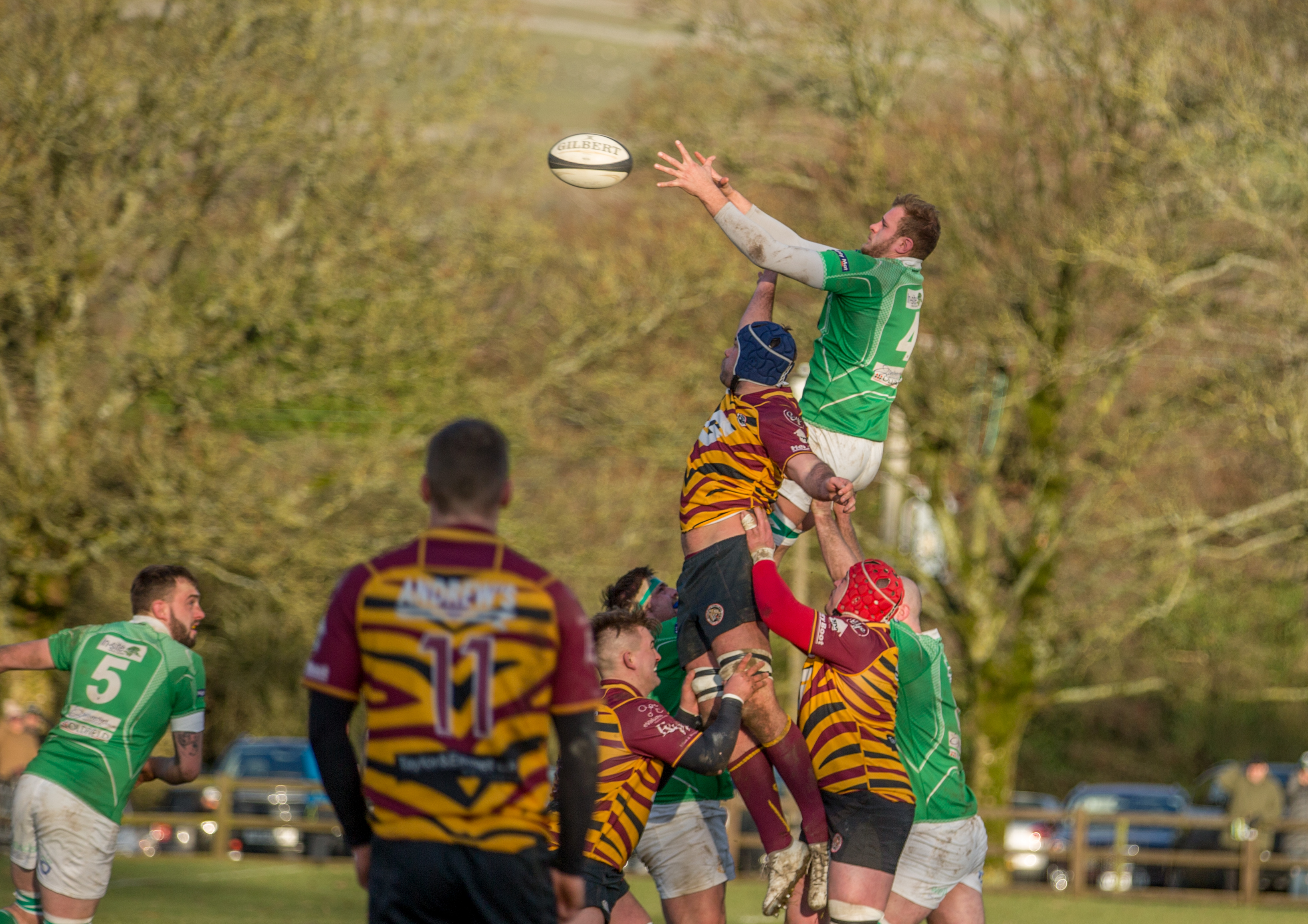 Eventually Dale did start playing without error and pinned Tigers deep in their 22. The pressure eventually told and Harry Bullough then scored from a lovely offload from Oli Cicognini. Blakeney-Edwards converted from the touchline.

Soon after the restart Wharfedale were handed field position with a rare mistake by the Tigers’ fullback, and from another scrum that saw Sheffield going backwards the ball was spun to right wing Ralph Wellock. The Sheffield cover forced him into touch short of the try line. Dale continued their occupancy of Tigers’ 22 and from a 5 metre scrum Dale were again going forwards when the cry of use it came the ref. It did not matter as Josh Burridge picked up and crashed over.

Something then happened that not many spectators have ever seen before; the conversion was charged down!

Tigers then hit back. They regathered the restart with no Wharfedale player competing for the ball. They quickly worked their way into Dale’s 22 and set up Thomas Hart for a try. Jo Duffy converted. Hart brushed off two tacklers to create a hole in Dale’s defence.

Tigers got the second converted try on the stroke of half time with Jamie Broadley benefitting from a well-timed inside ball. Broadley got the ball 37 metres out and left Wharfedale chasing shadows.

The home side started the second half with renewed vigour but were stunned when a yellow card was produced for Josh Burridge. The “cynical” offence was on Dale’s 22 and there had been no buildup of offences. Duffy again missed the penalty kick and Dale were soon out of their half and on the attack.

Sheffield took the lead with a well-supported break out from their own 22. Kain Rix touched down and Robbie Davidson added the extras. There were cover tackles made but a streak of Tigers overwhelmed the defence.

The Tigers’ backs were now beginning to open up and threatened nearly every time they got the ball. Peter Swatkins was introduced and his fresh legs were full of running. The alarm bells should have rung when he collected a clearance kick and ran past the chasing players; the attack finished when his pass went into touch.

Back came Dale with a well taken, bonus point try by Matty Houghton to lead 26-21. Dale had good field position but did not add to their score. Sheffield defended well but Dale should have extended their lead. A flipped one-handed pass went astray and Tigers soon sent the ball up to half way. Dale still pressed then, yet another decision that seemed to defy logic and turn the match in Sheffield’s favour. Cicognini was clearly high tackled but was pinged for not releasing after the tackle. The touch judge seemed to be trying to intervene and correct the ref but communication had either broken down or he was being ignored!

Sheffield did not complain and fired the ball into Dale’s 22.

The visitors then finished the stronger; scoring two more tries both converted by Robbie Davidson. Jamie Broadley scored both tries completing an impressive afternoon’s work by grabbing a hat trick. The last try frustrated the crowd as Dale had just defended their line and a Matty Houghton surge took the ball up to Dale’s 10 metre line. Quick ball was not run against a retreating defence but a kick ahead was fielded by Sheffield and passed to Swatkins just outside his own 22. Play was now truly broken and Swatkins just ran through gaps before setting up Broadley for a run in.