The sun shone on the Avenue and saw Wharfedale win by 7 tries to 3. It keeps Wharfedale in the battle to avoid relegation as they now sit just three points behind Blaydon with two matches left.

The opening 10 minutes were punctuated by reset scrums and a stoppage for injury. Hinckley got into Dale’s 22 but a crooked line out meant that Dale cleared. Minutes later they compounded this when a long clearance from Tom Barrett was knocked-on on Hinckley’s 22.

Dale opened the scoring after 14 minutes when a strong run from Robbie Davidson was recycled and Toms Asejevs surged into the 22. The move was finished off by Kieran Frost who saw off two defenders and rounded one more to get nearer the posts. Tom Barrett added the extras and slotted over a penalty to extend the lead. The penalty was the result of a good break by Barrett and had Hinckley scrambling to defend.

Hinckley came back strongly with a well worked unconverted try from Joe Glover. Forwards and backs combined to surge towards Dale’s line with good defense from Dale finally broken by a Glover dart on the blindside.

Dale did try to build again but soon it was Hinckley’s turn to exert pressure and attack. With Dale sucked into the break down Joe Wilson found room to pop over from short range. The try was converted by Wilson to take the visitors into the lead.

The visitor’s lead did not last long as Dale went through 6 phases after Hinckley kicked the restart back to them. This set up position in midfield and a glimpse of Phil Woodhead at his best. A massive dummy saw the slippery scrum half break into the open with only one player to beat. He chipped the last man, Hinckley’s No 10 Joseph Wilson, and set off but Wilson stuck out a foot and tripped Woodhead up. Wilson was only yellow carded but referee, Jamie Leahy, decided, as there was no defender, a penalty try was also necessary. This meant that Dale went into the break with a 17-12 lead.

The sun was now shining and so were Dale. Frost opened the second half with an individual try. A clearance kick from the visitors was collected by Robbie Davidson who set up the ball on half way. Barrett took the ball right and released Joel Gill who put Hinckley on the back foot. Quick recycled ball was then moved left. An off load from Rob Baldwin was moved to Robbie Davidson who fed Frost. He received the ball just outside Hinckley’s 22 and broke two tackles to run in and cross the whitewash. One of the would-be tacklers was ex-All Black, New Zealander Scott Hamilton. Barrett missed the conversion.

The restart was taken by Rob Baldwin who set off on a 30 metre run carrying tacklers and refusing to go down. Again, Hinckley scrambled, but a penalty was quickly conceded which Barrett slotted to give Dale a 13-point cushion. 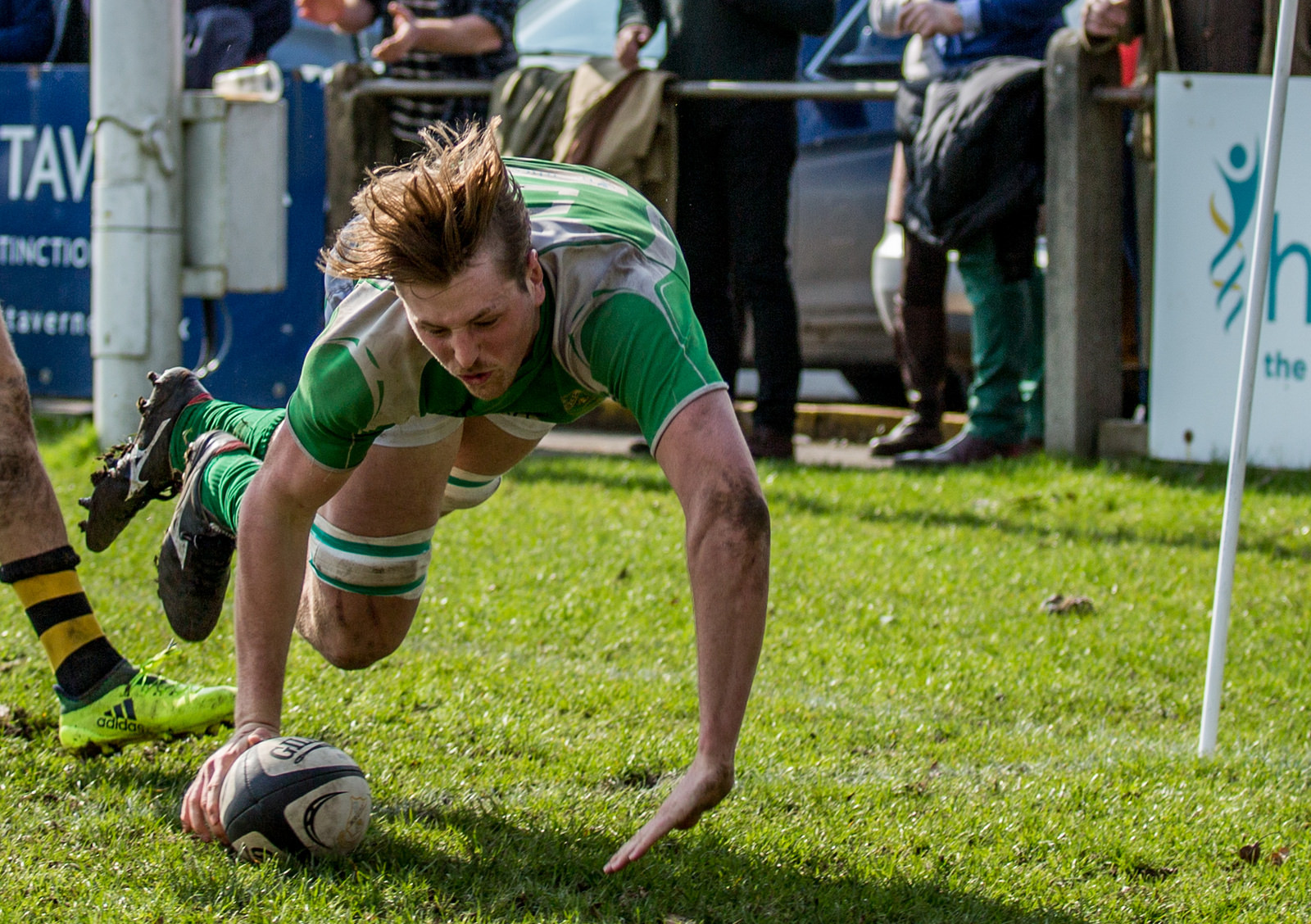 A try by Kieron Frost

Hinckley struck back with a converted try from Gary Turner, with Glover taking over the kicking duties, but Dale finished very strongly.

First there were strong runs from Tom Davidson and George Hedgley in a move that only broke down with a brave decision to intercept, rather than tackle, by Hinckley scrum half, Joe Glover. Oli Cicognini was across in time to cover the break away and Dale soon had the ball back.

Phil Woodhead made a break from a ruck on his own 10 metre line to touch down under the posts for a converted score. It was vintage stuff with Dale’s number 9 looking both ways before picking the ball up and throwing another dummy to create the gap which he shot through. Unlike in the first half there was no chip over the last defender, just a quick show and go.

Oliver Cicognini rounded off a sweeping move and a Barrett break and chip saw him score under the posts. Barrett converted the last try to give Dale the warmth of a resounding victory and the confidence boost they needed going into the last two matches of the season.

Phil Woodhead got the nudge as Man of the Match but there were contributions from all 20 players. Woody was back to his best. His distribution was excellent and he was constantly giving the defence problems. Hedgley, Tyson and Houghton were busy all afternoon. The front row was solid and Frost and Baldwin in thesecond row were superb. Frost again showed what a force he is in open play and Baldwin was destructive with the ball in hand. The backs ran with conviction and tackled robustly and the handling was also secure.

If there was a fault, on such a fine day how could there be, it would be a small quibble about competing at the restart when on three occasions Hinckley were able to regather easy ball.

What of Hinckley? They certainly contributed to an entertaining afternoon. Indiscipline cost them possession and territory and the yellow card and penalty try was a turning point just before half time. They claimed not to have had the “rub of the green” but in the end were also able to say that Dale were the better side and deserved to win.