The sun shone again at the Avenue for the last game of the season and the home side did enough to win on the day but now have to wait to see how Luctonians fare in their last two league games. Two 5-point wins will see them overtake Wharfedale.

Dale had chances to grab the vital bonus point but two yellow cards in the last 20 minutes saw them playing with only 14 men. They defended heroically and did get a third try during this time but missed out on the fourth try.

The opening was a tad nervy with Dale conceding a free kick at the first scrum. Dale soon got possession back and put in some good phases making yards with each carry. Tom Barrett opened the scoring with a trademark chip and collect after four minutes. He converted his own try and extended the lead with a penalty three minutes later.

Samuel Broster got the visitors their opening score by taking advantage of some uncharacteristicly poor Dale tackling. Lewis Barker slotted the extras from wide to the right.

Barrett added a penalty before strong running by the Dale forwards was finished off by Toms Asejevs. Barrett added the extras. Barrett had just missed a penalty shot and the resulting 22 drop out was fielded by Rob Baldwin. Baldwin fed Joel Gill who ran the ball at the defence. The move was carried forward by Dan Stockdale and Rob Baldwin before setting up Asejevs for the try. 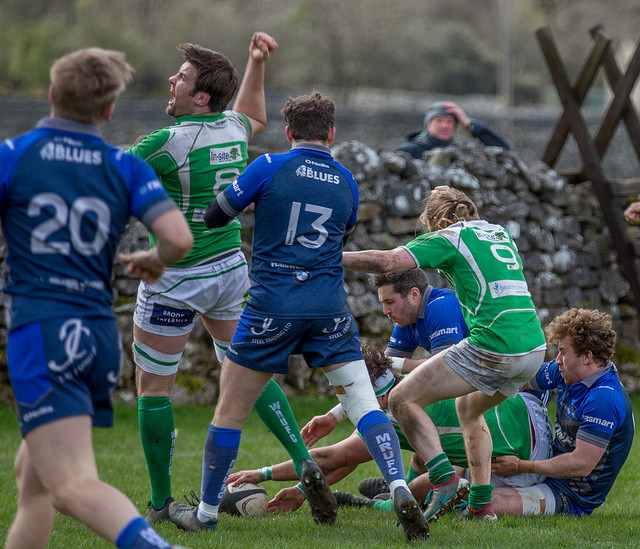 Back came the visitors and a 14-man maul drove forward before Samuel Moss crashed over for a try. Barker again had no problem from the tee. Barrett finished the first half scoring with another penalty.

The first twenty minutes of the second half were a tense battle of wills. Both sides were attempting to play open rugby but the defences held. When Rhys Lovegrove was yellow carded for a high tackle on 61 minutes it seemed to have given Macclesfield an advantage.

A moment of magic from Tom Barrett, during this period, nearly led to a score but Macclesfield were saved by pushing the ball over the dead ball line, with the crowd looking at a penalty try the ref decreed that “blue had touched the ball down first”. Credit to the Dale players for just getting on with the game and not moaning or jumping up or down.

The next period saw some desperate Dales defence as Macclesfield camped in the Green`s 22. A try looked certain but then Tom Davidson came to the rescue. He forced a turn over under his own posts and fed Richard Rhodes. Rhodes fed Stockdale who led the charge out up to half way. Oli Cicognini then had the speed and strength to get into Macc’s 22 and then 4 phases later a superb line from Robbie Davidson sent him clear through the defence. Barrett’s conversion gave Dale some breathing space with a 16-point lead.

Five minutes later Macclesfield narrowed the lead with a well taken converted try down the left wing. Worse was to follow when Josh Burridge was harshly sin binned for an incident when the try was scored and the restart was converted to a Macclesfield penalty! The resultant line out was stolen by Dale and excitement mounted as Cicognini ran up to Macc’s 22. Wharfedale went through 11 phases with the crowd roaring them on but the visitors survived and Dale could not grab that vital fourth try. The final whistle was greeted with a muted cheer as it was a great win against a very capable and determined Macclesfield side, but the faithful realised that there would now be a wait to determine Wharfedale’s fate.

This would normally have sent the very large crowd of well over 800 home in a triumphant mood. Dale have played some excellent rugby over the last few weeks and this was a game of rugby to be enjoyed with both sides contributing throughout the match.