A superb game of rugby with strong play from both sides finished with Sedgley very happy to take 5 points back to Manchester.

The gap between the two sides in league position counted for nothing. Dale could have grabbed a late try to level the scores but the game slipped away and at least they got a losing bonus point. Unlike the battling Sale side from the last home game this was a good clean game of rugby with Sedgley Park committed to playing open rugby.

Wharfedale started the brighter and competed for the kick off, soon working Tom Barrett into position for a drop goal attempt which just missed.

The Park drop out was run back by Joel Gill. Second phase ball was sent to Barrett and a superbly timed pass combined with strong running saw Kieran Frost burst into the visitor’s 22 and get close to the line. Wharfedale went through 9 phases without reaching the line before a slight fumble gave the defence a scrum. Dale pushed the Tigers off the ball and had a penalty advantage. Barrett had two more chances to open the scoring but missed a drop goal attempt and then the original penalty shot at goal. This was in many ways the story of Dale’s season so far. So much possession in the opposition 22; so many chances to score but “nil point”.

Dale carried on the attack but a wayward Barrett pass took them back to midfield and an isolated Tom Mann lost the ball. Park’s attempt at getting into Dale’s territory failed when a kick from stand off, Stephen Collins, rolled over the dead ball line and Dale had a scrum on half way.

Good work from Joel Gill, George Hedgley and Adam Howard set up good field position. Barrett then released Frost for another surge through the Tiger’s defence. This time he had the speed and strength, despite being tackled by two defenders, to cross the whitewash to open the scoring. Tom Barrett added the conversion.

Then came the first mistake. A clearance from Barrett was followed up and Park’s receiver, Sam Lowthion, was bundled into touch by Oli Cicognini and Tom Mann for a Dale line out. A successful catch and drive ended when Phil Woodhead dropped the ball.

The mistake was punished when Park ran the ball from the scrum and created space for Jamie Harrison to score in the corner. A simple loop move by Collins created the overlap and Dale’s right flank was left wide open. An excellent conversion from Stephen Collins levelled the scores.

A decision on half way incensed the crowd. Frost seemed to have competed for the ball in the line out and the ref was happy for play to move on. Assistant referee however called the work illegal and Park were awarded a penalty.

They advanced in to Dale’s 22 and exerted pressure on Dale’s defence. More fine handling created the visitors second try and Matt Riley crossed the line for a converted try.

A moment of magic from Barrett led to Dale levelling at 14 all. He chipped the ball over the defence, collected the ball and touched down for a converted try. 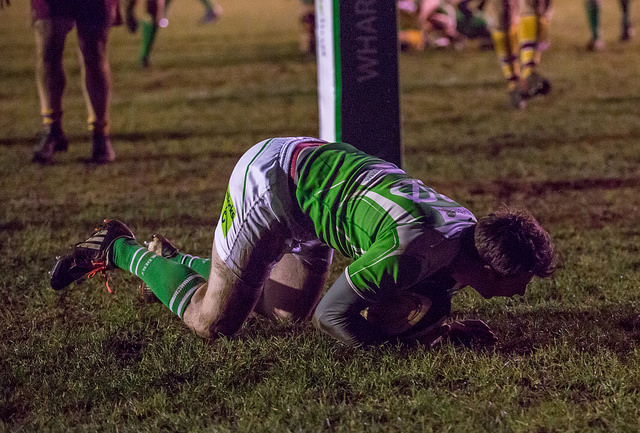 More outstanding play in midfield by Park led to their third try from Hallam Chapman. Another touch line conversion from Collins ended the first half scoring. The try was set up by dual runners, prop, Nathan Rushton, running a line just ahead of No 8 Hallam Chapman. The pair carried on and with some forward looking passes combined to split the Dale defence wide open. Good to see forwards combining strong play with good handling.

A Barrett penalty closed the gap at the start of the second half but Sedgley muscled over for their bonus point try to create an eleven point cushion. Matt Riley scoring his second try with Collins again slotting the extras.

Dale clawed their way back into the match with a try from Josh Prell and a touch line conversion from Barrett. This came after a lengthy period of pressure on the visitor’s line. A driving maul was pulled down twice with the line begging. A yellow card was issued to Park’s Hallam Chapman but no penalty try. More offences followed and but again no further punishment. At least Dale did get some points from the effort.

George Hedgley was also yellow carded for a no arms tackle, two minutes after over reacting when Dale had already won a penalty when Woodhead had been obstructed. The penalty was reversed.

A drop goal from Park’s Collins ended the scoring.

Wharfedale were pressing hard for a fourth try which would have levelled the score and given them three valuable league points. One problem was now that both hookers, Ian Larkin and Jake Parkinson, had been forced off with injury. With no hooker on the pitch it was Chris Swainson who stepped into the front row and threw in at the line. Both scrum and line out faltered and Dale could not make full use of the possession they had.