The sun shone at the Avenue to greet the start of a new season. There had been the usual rumour and talk about who will be wearing the green this year and those matters still have to be resolved. There were however some different faces last Saturday. Some returned, some new and some stepping up to the 1st team. The players are all having their chance at showing what they can do. There will be two more chances for the management to look at the players in a competitive match; on Wednesday the Foresters travel to Bradford Salem and on Saturday the 1st XV travel to Hull Ionians.

The match was the usual preseason mix of good moments with a blend of confusion and scrappy play. The visitors played a strong part in the match and at one stage in the second half looked as though they could grab a victory. Wharfedale, led for the first time by Dan Stockdale, deservedly led 10-0 at half time with two well taken unconverted tries from Ben Parkinson and Joel Gill. It could well have been more but credit was due to the visitors for keeping the Greens at bay.

Kirkby rarely visited Wharfedale’s 22 but were handed the ball deep in the second half and good support play eventually led to a try for the visitors when Cameron Dale finished strongly. Ryan Terry converted to close the gap to three points. Minutes later Kirby were again deep in Wharfedale’s 22 with an attacking line out and looking to take the lead. Simon Borill claimed the ball for Dale and the threat was over. 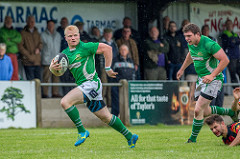 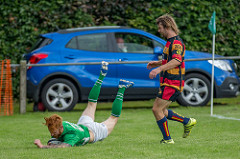 Another stolen line out saw Wharfedale trying to run out of their half but being held by the visitors until a long pass from Josh Burridge found Josh Prell in a tiny bit of space. It was enough for the talented winger to create a bit more and set off on an awe inspiring run using speed, swerve and strength. A run that included 4 hand offs took Prell into the Kirkby 22 and he offloaded to Harry Dunne. Dunne kept the move going and shovelled the ball to Burridge. For the second time in the move Burridge passed to Prell who popped over the line for a fantastic try which Marcus Farnworth converted. 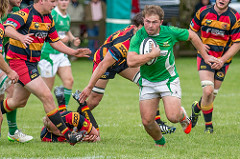 Josh Prell on his way

Overall a pleasant afternoon and many positives to take back to the training ground. Joel Gill, showing the sparkle he showed on his previous sojourn at the Avenue, edged the Man of the Match award. The pack was, apart from one set piece, firm and often going forward. The pressure exerted on the Kirkby eight stopped the visitors gaining a platform. The line out, again, apart from one not straight, was excellent. The combination of Simon Borill and Jim Mason in the second row proved very effective in the tight and in general play. Sam Gaudie and Ed Hainsworth worked well together at 9 and 10 and Ed had a solid first game in a green shirt; no mistakes, good distribution and intelligent use of the boot.

We were treated to some good runs from the backs.; Prell and Parkinson who scored tries and also Oli Cicognini who showed that he lost none of his form after a long layoff. The back row of Burridge, George Hedgley and Tom Whyte was another group that worked as a unit. The starting XV and the players that came off the bench all showed that they were more than capable at this level and that Wharfedale have strength in depth.

The most pleasing moment for your humble scribe and one that caused his eyes to moisten (the over emotional Welshman) was to see Dan Stockdale lead the side out as captain. Stockdale is a fine example to all the local lads that aspire to play in a green shirt. He worked his way through the 3rd, 4th and 5th teams before becoming a firm fixture in the Foresters. When called to step up to the 1st team he took on the challenge with enthusiasm and is now a permanent fixture. Well done Dan.