There was hope that Dale could build on their 2nd half performance against Blaydon but nobody told the script writer. Dale were abysmal in the first 24 minutes and Huddersfield scored 5 tries to lead 29-0. The first try, scored by Richard Piper, was well taken after a good catch and drive. The next four tries were the result of appalling attempts at tackling. The second was after Austen Thompson was given the freedom of Dale’s 22 and an offload put Lewis Bradley over the whitewash. The third was from a Huddersfield line out that Dale seemed to have won. Huddersfield hooker, Francis Entressengle, reacted quickly, picked up the loose ball and fed Adam Malthouse who went over unopposed. The fourth was scored from deep, with Huddersfield flying past half-hearted tackling for Lewis Workman to score. The fifth was another poor effort at defence which allowed Brandon Conway to touch down. Jonathan West converted the first two.

However, I come not to bury Wharfedale (Huddersfield had effectively done that in 25 minutes) but to praise them. At last Wharfedale turned up and finished the first half strongly. There had been glimpses of Dale’s potential even in the first quarter. A catch and drive sent Huddersfield back 25 metres but the ball was almost immediately spilled in midfield. The brief period in Field’s territory ended when Jim Mason was penalised for taking exception to being held off the ball by prop Rueben Pollard.

Wharfedale scored a try from Joel Gill and a second from Phil Woodhead, both converted by Tom Barrett, which meant Dale only trailed by 15 points at half time. There was a bounce back in the step of the Greens and the faithful (again turning up in good numbers) could also hold their heads up and hope that Dale could carry on and turn the match around.

Joel Gill scored after pressure from Dale saw the home side giving away penalties and Dale gaining good field position. The pack exerted pressure and when the ball was spun right a well-timed ball allowed Gill to use his power and burst through the defence. The second was from a passage of play that took Dale from their own 22. George Hedgley won a Huddersfield line out, Dan Stockdale surged forward and then Adam Howard set up good ruck ball. Phil Woodhead threw a lovely dummy and was off, breaking tackles as he went, up to Huddersfield’s 10 metre line. Woody found Tom Whyte in support who offloaded to George Hedgley. Again, Huddersfield were forced into giving away a penalty. A good line out and work from the pack finished with Woody touching down under the posts. 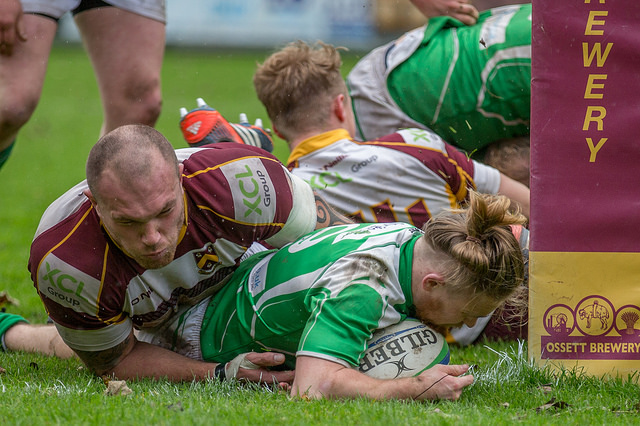 A Barrett penalty brought Dale closer but the second half saw two tries apiece. Field’s Malthouse grabbed a try before Tom Mann crossed for Dale. Will Milner for Huddersfield and Ben Parkinson for Dale ended the scoring spree with West adding his conversions but Barrett missing his. 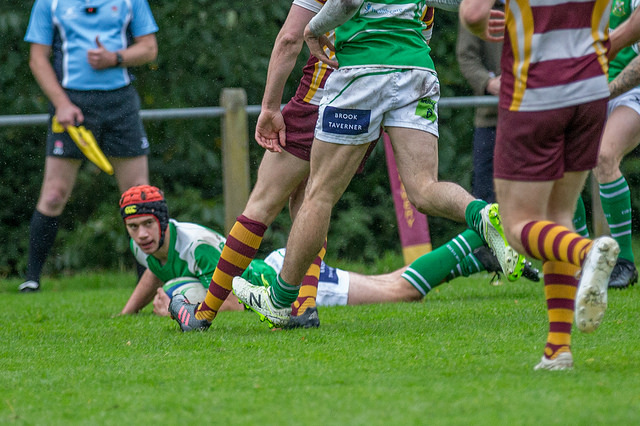 The second half was an even contest with both sides having good possession. The tries were the result of good attacking moves and considering the conditions, some good entertaining rugby.

Ignoring the first 25 minutes, there were positives to bring back to the Avenue. The pack were magnificent, maybe just holding their own in the scrum but dominating the line out. Players carried the ball well, none more than George Hedgley who put in a tremendous shift. If the pack were the work horses then the backs did their bit too. All four tries were scored after pressure from the forwards released the backs to cross for the touch down. Phil Woodhead was back to his best and Joel Gill and Oli Cicognini both put in strong runs. New boy, Tom Mann, was secure at full back and showed that he could also run with the ball.

Wharfedale, having struggled to cross the whitewash in the first five games, have now scored 7 tries in two matches.

If only Dale could start better.