The final whistle was a relief for Caldy who clung on to win an entertaining game of rugby. Dale outscored the league leaders by three tries to two and could have gone on to win. Caldy led at half time by 17 points to 7 but it was Dale who had the best of the second half to nearly upset the form book.

Wharfedale started hesitantly and a poor exit strategy allowed Caldy to pressurise Wharfedale’s line. The defence held and Lewis Wilson forced Caldy to give away a penalty and Guy cleared the lines. A successful line out led to a sweeping move down field. A rehearsed move in midfield confused the Caldy defence and Rob Baldwin charged up to the Caldy 10 metre line. Quick ball was fed to Jamie Guy who added more confusion and was only stopped 5 metres from the Caldy line. The forwards then piled in and were soon awarded a penalty under the posts. With a shot at goal begging Dale went for the corner. The line out was won but scrappy ball only led to a Caldy scrum and a clearing kick which was taken by Josh Prell who ran the ball back into Caldy’s 22 but unfortunately went into touch. A poor line out from Caldy put them under more pressure as Dale attacked. Another clearance was again run back by Prell, good support work recycled the ball and Harry Bullough swept forward. James Tincknell carried the move on and finally Toms Asejevs surged up to the line. He was held just short and being isolated Caldy full back, Andrew Soutar, forced the penalty.

After all the excellent work from Dale Caldy opened their account with a try from winger Jack Beevers who ran from his own 22 after Caldy ran a quick penalty and caught Dale out. Gavin Roberts added the conversion and added a 36 metre penalty minutes later.

Dale fought their way back into the game and a line out in Caldy’s 22 went through 8 phases before creating space for James Tincknell to squeeze through. Jamie Guy slotted the extras. 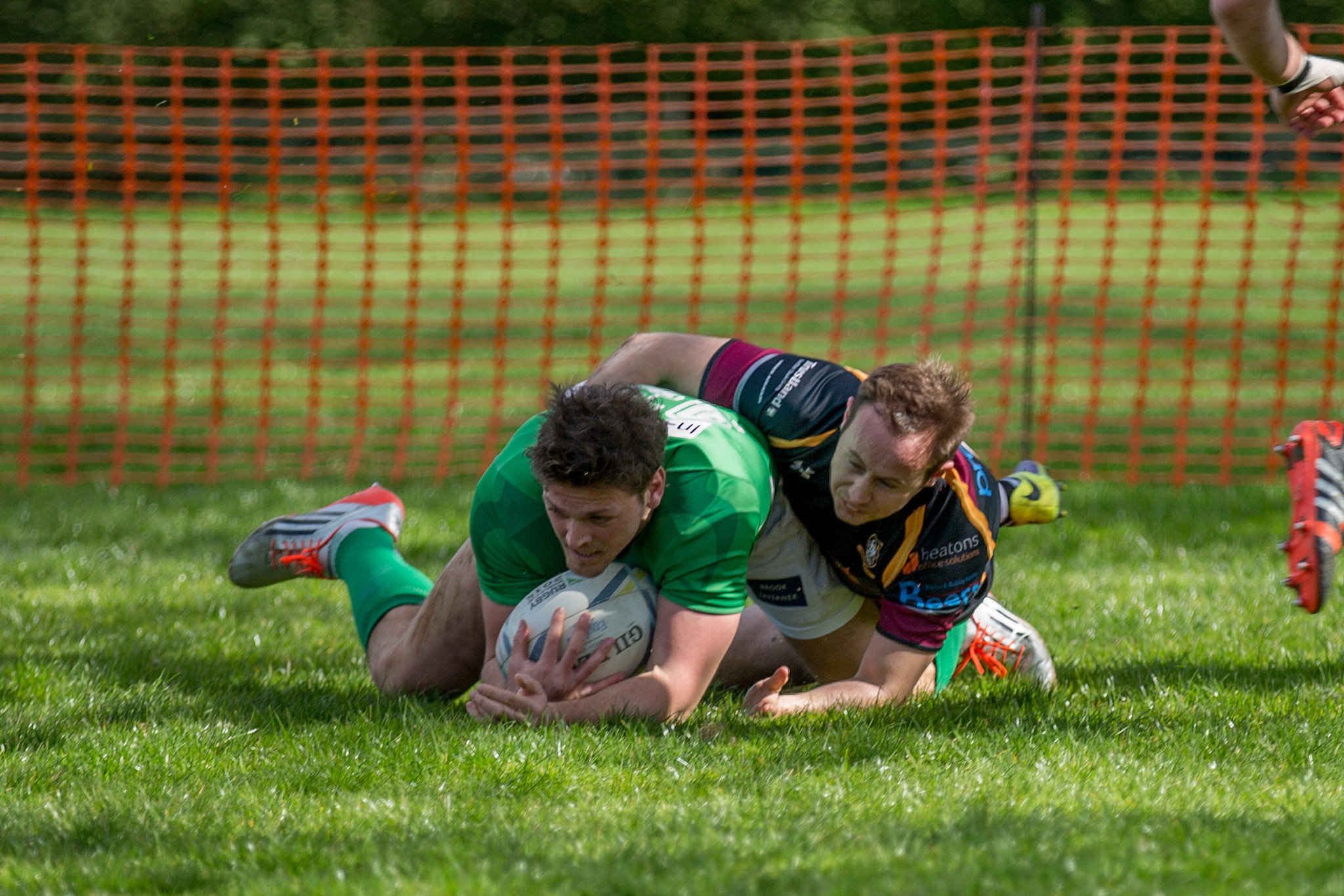 The Green machine again mounted attacks and most were started by Harry Bullough taking the long kick from Caldy and running the ball. He had good support from Josh Prell and Huw Morgan.

Caldy attacked twice from deep, once passing into touch, and then a magnificent cover tackle from James Tincknell saving the day.

Caldy’s second try was also from long range when winger Nicholas Royce broke free and touched down under the posts. Roberts was again accurate from the tee.

Dale opened up in the second half with good pressure from the pack after another good line out and Joe Altham crashed over for an unconverted try.

A crunching tackle from Morgan on half way saw Dale lift the tempo but, for once, Guy did not find the punishing touch kick and Caldy got a moments relief. 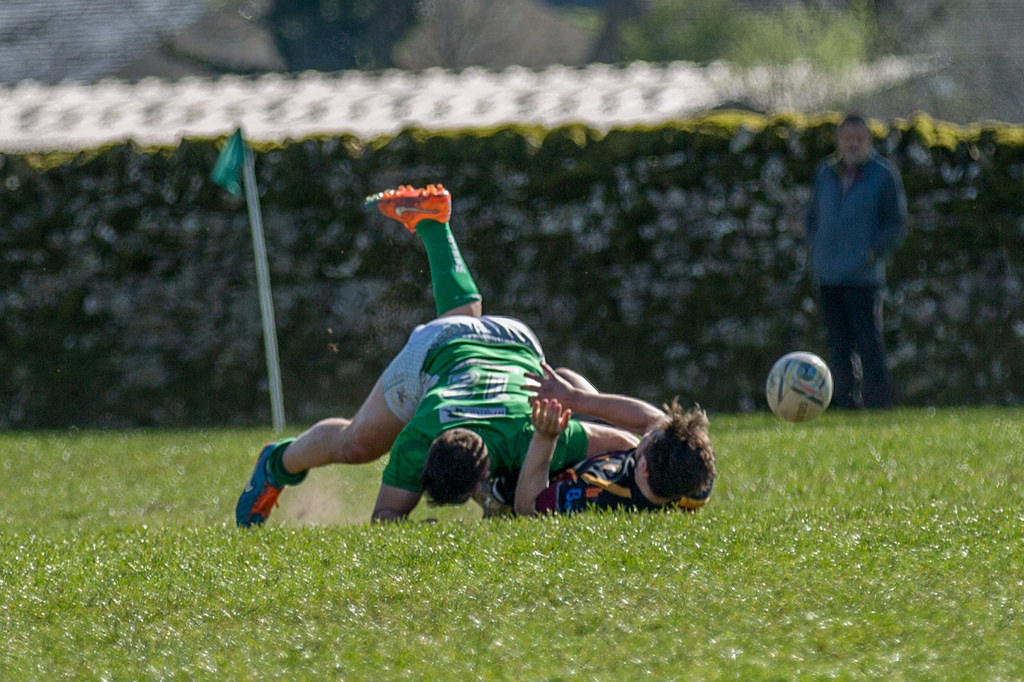 5 minutes later good Dale pressure led to Joe Altham grabbing the ball and feeding Phil Woodhead who somehow got it to Jamie Guy to score under the posts. Guy’s conversion took Dale into the lead.

A Robert’s penalty from 44 metres won the game for the visitors.

On another day Dale could have won the game. Just after Caldy threw a forward pass, a scoring pass that led to Harry Bullough scoring was given as forward. Another day the pass would have been allowed.

A minute later Ralph Wellock was yellow carded for what the ref described as a trip.

With Dale under pressure a worse case of using the boot by Caldy replacement wearing no 24 was just punished by a penalty!

Another obvious chance to score was wasted when excellent referee, Harry Walbaum,(that’s what his coach told me he was) decided that Rob Baldwin had not grounded the ball. This was after some outstanding work from Jordon Poole who came close to scoring and was only rewarded with a dislocated shoulder. The try looked certain with a two man overlap and only winger Nic Royle anywhere near the action.

With the clock running down Caldy went through 16 phases of keep ball pick and go on the same patch of turf. They were actually in an orderly retreat as every phase saw them go backwards but they were so desperate to beat the magnificent Green machine! But a professional and clinical finish by the visitors saw them cling on.

This was a superb performance by the men in Green. I do not want to be critical of such a performance and Caldy limped off the pitch knowing that they had escaped with a victory but we should have won. Hats off to Nic Royle who saved the game for Caldy by stopping Rob Baldwin from scoring.

Frustrating the end may have been but let us not turn away from the fact that promoted Caldy were brought down to earth at the Avenue. Apart from the long distance breaks they were made to work hard for any gain in territory and it was a battle. There were niggles from both sides and credit to the players for keeping control. There were occasions when the players had to keep control as the officials missed, or ignored, some of the incidents. The head butt on Baldwin, Harry Bullough being pushed into the hoardings, Josh Burridge tap tackling well off the ball, Simon Borrill nearly being strangled, various comments by both sets of players that should have been punished.

Too much criticism of what was a great game of rugby.

All players worked hard in tackling and ball carrying and fully deserved the loud acclamations of the supporters after the game. Harry Bullough edged the Star Man award in the Rugby Paper as he was faultless and gained a few pitch lengths of territory when fielding Caldy’s long kicks. There were 17 other contenders. Huw Morgan might have got it for the Tackle of the Season; Tincknell for his cover tackle and strong running; Guy for his control from standoff, strong tackling and running; Lewis Wilson, Josh Burridge and Rob Baldwin for their work at the breakdown and their efforts on the ball; the front five for generally controlling the set piece…..

Both Dales’wingers played important parts in the game. Josh Prell and Ralph Wellock were on hand to either take a clearing kick or support Bullough. Prell has returned to something like his best form and there was always a buzz when he got the ball. Wellock seemed to benefit on this appearance for the first team with having the experienced players around him.

Let us hope and pray that we can bottle this effort and uncork it when we go to Preston on Saturday and WIN an away match.