Wharfedale stretched their winning home run to seven games with an impressive win against Harrogate. Gate may have dominated the scrum but excellent defence from Dale stopped them crossing the whitewash.

A game played in good spirits was edged by Dale by again playing as a unit with all players contributing to tackling and ball carrying.

Lewis Wilson opened Dales account after sustained pressure pushed the visitors to defend their own line. Jamie Guy could not add the conversion.

Harrogate’s scrum was getting the better of the Dale eight and scrum penalties were costing Dale territory. It was Dale who scored before the half time whistle with George Hedgley crashing over. With Guy’s conversion hitting the upright Harrogate were only 10 points down and had the slope and what breeze there was in their favour for the second half.

The Green Machine came out with all guns blazing and Josh Burridge started proceedings by bursting out of his 22 from the Harrogate kick off. Wharfedale played some excellent rugby involving forwards and backs. A try looked certain to come as the pressure mounted on Harrogate. In the end it was a lucky score when a Guy cross kick bounced back from Robbie Davidson into the hands of Harry Bullough who had an easy run to the line. Guy added the extras. 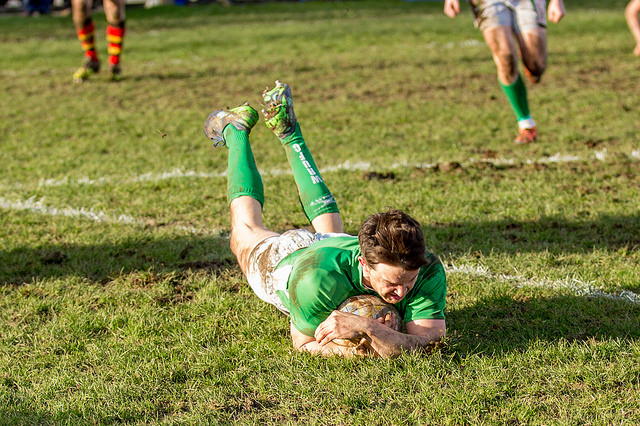 Harrogate did get a consolation three points from the boot of David Doherty.

This was an excellent game of rugby played in front of an 800 crowd. There was strong play from both sets of players. The tackling was fierce. Both teams tried to play good rugby and produced entertainment that was well worth the cost of entry.

Dale had the edge because, apart from the set piece, they played as a team with all players making a full contribution. There was no Man of the Match as so many players gave outstanding contributions.

Skipper Rob Baldwin led by example with ferocious tackling epitomized by a move deep into the second half when a crunching tackle also saw him strip the ball off the luckless Harrogate player. Adam Howard’s tackling was worthy of his nickname, Wrecking Machine, and again led to turnovers. Dan Stockdale carried like a man possessed and also added to the tackle count. The backs, when Gate moved the ball wide, also barely missed a chance to bring down their man. Jamie Guy slipped into the 10 shirt and had a good afternoon with distribution, good field kicking and strong tackling. Josh Burridge and Lewis Wilson caused Harrogate problems all afternoon, with George Hedgley and Richard Rhodes also joining in tirelessly.

Robbie Davidson and Scott Jordan did some amazing work in defence. Often under intense pressure they combined to coolly clear Dale’s line. The midfield was solid with Tom Davidson and James Tincknell letting nothing past and forcing Harrogate on to the back foot when they had the ball. Harry Bullough was rock solid as sweeper and on hand to pick up a try that may have been fortunate but thoroughly deserved.

Harrogate added to their misery with poor handling. Dale’s handling was probably the best display of the season with hardly any unforced errors.

One Harrogate supporter commented after the game that Harrogate did not need to practice their scrummaging. He was answered by one of the Wharfedale faithful saying that they needed to practice everything else!

James Doherty congratulated the whole team on the performance and his pick of the players was Dan Stockdale. Dohers stated that Stockdale was outstanding.

Click on the link below to read and we look forward to visiting our friends @Luctonians on Saturday.
#WRUFC #OneTeam #NAT2N

Click on the link below to read the match report, and thank you to @MoortownRUFC for the game.
#WRUFC #OneTeam

Please click on the link below to read the match report, and thank you to @RiponRugby for the game.
#WRUFC #OneTeam
https://www.wharfedalerufc.co.uk/ripon-2nd-xv-17-wharfedale-3rd-xv-17/