An afternoon of brutal rugby, with no quarter being given by either side, was just edged by Dale thanks to a Tom Barrett drop goal with minutes to go. Both sets of forwards pounded into each other for 80 minutes and both sets of backs hardly gave an inch.

Sam Gaudie, in his first start for Dale after recovering from injury, had a very influential game at scrum half. He sniped away at the Park defence and put in some intelligent kicks to force them backwards. 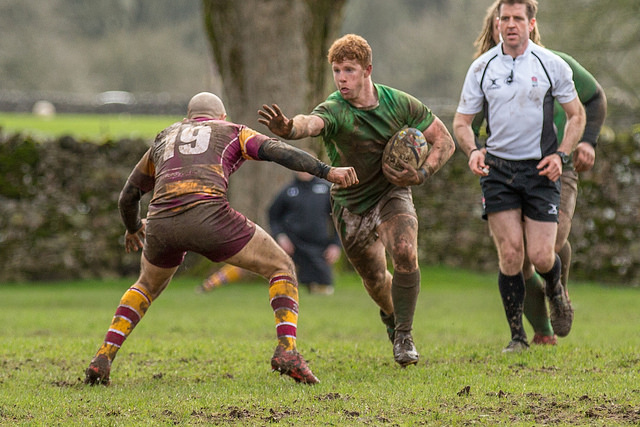 Park opened strongly and exerted great pressure in Wharfedale’s 22. After 8 minutes they opened the scoring when Max Skofic broke through the Dale defence, despite Sam Gaudie’s valiant efforts, to score under the posts. Steve Collins added the conversion. This was the first try that Dale had conceded at home for an outstanding 255 minutes. The match then became a battle in midfield and neither side could gain the upper hand and the rest of the half was scoreless.

Dale levelled the score by somehow shoveling the ball wide to the right for Harry Bullough to touch down. Barrett’s excellent conversion made the score 7-7. 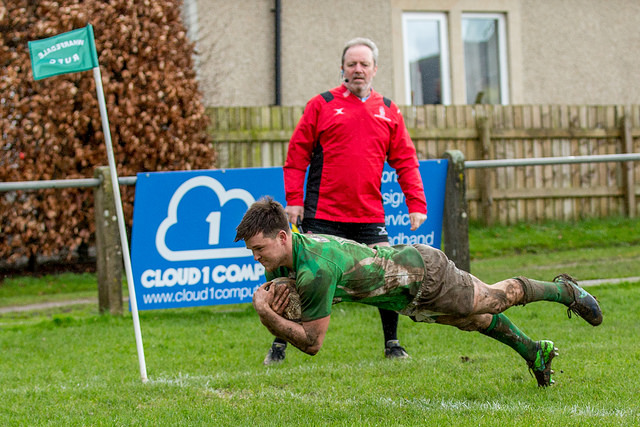 Sedgley had some time in Wharfedale’s 22 but their only reward was three points from Matthew Riley. Barrett then levelled the score with a penalty from 35 metres.

Dale then pressed home to find the winner and good pressure from forwards and backs set up Barrett to drop the winning goal. This takes Dale’s winning home run to 8 matches.

The pack, which was heavily criticised last week at Scunthorpe, was outstanding. Many of the faithful thought that the man of the match should have been awarded to the pack as a unit. The line out again purred with only one out of twenty going astray for a 95% record compared to Park’s 80%. The number of line outs also reveals how much pressure Dale exerted forcing the visitors to kick out of defence. The scrum was also vastly improved with Dale winning 10 out of 11 – the only one they lost was a free kick awarded for very slight forward movement. Referee, Robert Bourke, drew massive applause when he awarded a free kick to Dale for a crooked Park feed – these awards are rarer than hen’s teeth! He only blotted his copybook immediately when he then pedantically pinged Josh Burridge for an illegal restart – also a rare infringement.

There were outstanding performances from Josh Burridge, perhaps his best when in the skipper role, George Hedgley and Dan Stockdale and the rest of the pack took their share of the tackle tally and ball carrying. New boys Chris Swainson and Simon Borrill acquitted themselves very well. Adam Howard, playing in his sixth position within seven days, started in the second row and worked hard throughout the game.

Many of the faithful were saddened when Phil Woodhead had to pull out of the starting lineup because of problems with both knees. Up stepped Sam Gaudie. Many words have been said about Gaudie. Many things have been said about his potential. Here at last, after brief glimpses pre-season at Tynedale and away at Harrogate and also spells with the Foresters, he showed that he was a touch of class. He kept the visiting back row honest. He varied his tactics and gave good service to his stand off. Tom Barrett also showed touches of brilliance. His running was always threatening. His field kicking was effective and the drop goal to win the match, which may not have been his finest, but it got over, showed he could handle the pressure.

The backs were not as free running as last week but they were up against a much stronger outfit. The away game to Sedgley, back in November, had been full of halfhearted tackling. This was a different approach with all the backs taking their man and if there was a break then the cover swept in to help.

One question that everybody was asking after the final whistle was how can Dale beat the team occupying third place in the division but lose to one of the teams that look likely to be relegated? With three games left Dale are 15 points above the relegation spot. Nearly, oh so nearly, definitely safe.

The match photographs are available under the Photos tab – follow the Link to Flikr Album.