A large detachment of the faithful crossed the Pennines to visit Lightfoot Green to watch the last match of the season. They were rewarded with Wharfedale’s first away win for 18 months. Grasshoppers played an impressive part in the match and at the start of both halves had strong leads. Dale never gave up, fought back and in the end ran out winners by 6 tries to 4.

The opening 12 minutes were dominated by the home side and resulted in individual tries from Niall Crosley and Matthew Gargett. Allen Lewis converted both and then added a penalty to give Hoppers a 17- 0 lead.

Jamie Guy opened for Dale when he followed up a Phil Woodhead box kick. He regathered the ball, broke any defence and ran in from 40 metres. Tom Barrett missed from the tee but 5 minutes later converted Joe Altham’s try after the prop had followed up Barrett’s chip, recovered the ball and crashed over under the posts. Lewis added another penalty for Hoppers before Dale closed to within a point with a Barrett try and extras. Barrett’s try started from a scrum 8 metres from Dale’s line. A good forward moving scrum led to a Josh Burridge charge. Josh Prell and George Hedgley continued the attack and then Barrett played his part with a deft chip. The 17 point deficit was only one as the teams went in for a cuppa. 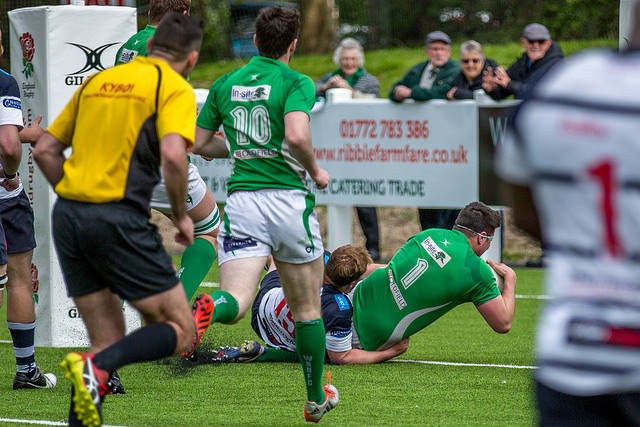 Preston scored two more tries at the start of the second half from Oga Mabaya and Lewis Allen. Allen’s conversion gave Preston another good lead. This was despite Dale playing good rugby. Jamie Guy ran a good line and was clear, only for the eagle-eyed ref to judge the pass from Barrett as forward. A minute later Dale worked hard to press the Hoppers line and then a touch of family farce. Joe Altham, who might have tripped up and scored under the posts, decided to pass and his brother, Peter, took the pass well. Peter was wearing a Preston shirt and started a counter attack which eventually led, with good support and inter passing, to the veteran prop, Mabaya, scoring under Dale’s posts!

Dale took a short restart and caught Preston napping when Barrett recollected the ball, then again farce. Dale managed to give the ball away for Allen to sprint 60 metres to the Dale line.

An away win now looked very unlikely and Dale seemed doomed to spending a whole season without an away victory.

Wharfedale battled hard and forced Preston into their own 22. They turned the ball over, fed James Tincknell who ran at the defence and fed Adam Howard who bulldozed his way over from eight metres. Hopper’s restart was taken by Burridge who ran out of the 22. Good support and good hands gave Tincknell room to press the attack into Preston territory before releasing Scott Jordan down the left wing to score.

Two tries in 2 minutes now set up a thrilling finish. Could Dale at last finish a match away from home in style and grab a victory? Preston were not going to give in without a fight and it took two pieces of brilliance to turn the game. First Rob Baldwin and Lewis Wilson combined to hold a Preston player up and win the put in at the scrum. Second was a defence shattering break from Barrett who released Tincknell to score the go-ahead try. Barrett’s conversion gave Dale a 4 point cushion with 10 minutes to go.

Preston mounted an offensive and had a line out deep in Dale’s 22. Pulses were racing, hearts were pounding. Hoppers won the line out and went through 5 phases before Dale forced a turnover and got the ball away. With two minutes to go Dale won a penalty 40 metres from the home try line. An injury forced a long stoppage and a debate worthy of being recorded in Hansard took place as to whether Dale should kick to the corner or take a shot at goal. The argument swung one way then another and in the end it was decided, when the ref restarted the clock, to go for goal.

Barrett was carefully timed by the ref (and the Wharfedale coaches) and stepped up and slotted the three points. With only a minute to go Dale could not possibly lose and if they kept their nerve hold on for that elusive win.

The Preston restart was taken cleanly but after only one phase the ball was knocked on giving the home side another bite of the cherry. They won the ball but made no ground before the Green Machine forced yet another turn over. This time the ball was protected like a Faberge Egg and, when getting the nod from the ref that time was up, deposited into touch.

A seven try thriller ended by thrilling the travelling faithful and rewarding them for all those hours spent supporting Dale away from home. The hospitality at Lightfoot Green was excellent and it a shame that Wharfedale will not be visiting Preston again next season. On behalf of the club I wish Preston well and hope they return to Division 2 North as soon as possible.

There were many contenders for Man of the Match. James Tincknell got my vote for his outstanding work running at Preston and always posing a threat. He nearly grabbed a second try as well but the ref thought the grounding was suspect. He is a player that Dale can build around. He has a good understanding with others around him and puts in his shift at tackling and at the ruck and maul.

Others in contention were Rob Baldwin, Josh Burridge and Lewis Wilson. This back row has hardly played together all season but they are an impressive trio. Great work forcing turnovers is equalled by their ball carrying, line out control and tackling.

Tom Barrett again was class. Two excellent chips led to tries and his break at the end led to the winning try.

The front row (all five participants) was solid, and if they were nudged back a couple of times made up with impressive drives of their own. George Hedgley and Richard Rhodes provided plenty of power in the boiler room and were on hand to steady the ship when needed.

The back three, Harry Bullough, Scott Jordan and Josh Prell (not forgetting Ralph Wellock who came in for Jamie Guy) were all impeccable again and showed that they wanted to get involved in the action wherever possible. All, including Wellock, played a vital part in the victory.

And so another season comes to an end. Good luck to players who are going on to play representative games and safe travels to club members who are travelling to New Zealand for the Lions matches. We will all, no doubt, suffer the slings and arrows of rumours over the summer break. I for one hope and pray that we can keep this squad of players together. These last few weeks have shown that we can compete with anyone at National 2 and with one or two additions will have a great season to look forward to.

Took the opportunity to get this mammoth but necessary task done in time for the start of the new season! Click on the link below for more details 👍💚
#WRUFC #OneTeam #WeWillBeBack
https://www.wharfedalerufc.co.uk/back-pitch-works-completed/

We have the pleasure of focusing on the legend that is Len ‘Tiff’ Tiffany this week. Click on the link below for more details 💚
#WRUFC #OneTeam #Legend #Tiffosi
https://www.wharfedalerufc.co.uk/meet-the-green-machine-leonard-tiffany/