A frustrating afternoon in the Cheshire sunshine saw Dale again slip to another away defeat. There was however the relief of a losing bonus point which means that Wharfedale are now certain of retaining their position in National League 2 North.The relief came with the last kick of the game when Tom Barrett landed a 30 metre penalty.

Chester opened with some strong running at the Wharfedale midfield. First Chester fullback, Sean Bean, collected a chip from Tom Barrett, that unluckily bounced badly for Barrett, and Bean charged through the defence into Dale’s 22. After 2 minutes Freeman Payne broke clear from half way to score under the posts. Callum Bennett slotted the conversion.

Dale then worked a good field position with strong tackling which forced a penalty. From the effective line out the ball was quickly moved left and a well-timed pass from Tom Barrett sent James Tincknell through. His final pass was taken by Jamie Guy to score. Barrett brought the scores level from the tee. 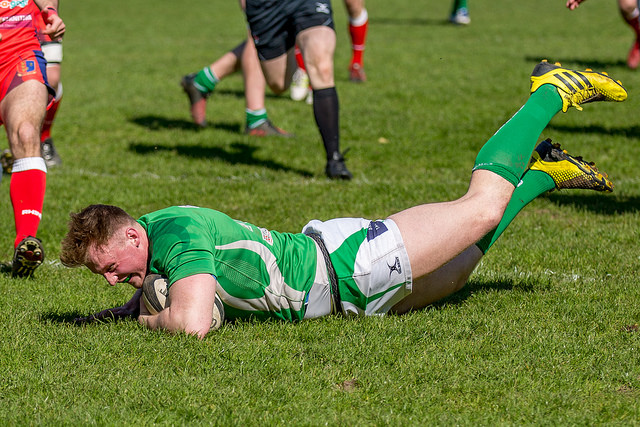 Both teams then struggled to put effective phases together. Dale had chances in Chester’s 22 but mistakes gave the home side chance to clear. The best chance followed a break from Tom Barrett. George Hedgley carried the move on by battering his way forward. Quick ball was recycled wide left and Harry Bullough seemed to have scored a superb try. The only person who did not agree was the ref who was on his own saying that the pass was forward and awarded a scrum to Chester.

Chester then struck when their No 8, David Ford, picked up from a scrum ran at the defence and then gave an inside ball to Chester winger, James Preston. Preston, who had cut in from the left wing, had the space and speed to run to the line. Bennett added the extras.

Dale gathered their own restart and then swept into Chester’s 22 but again, with a score looking on, they surrendered possession.

In the second half Dale again had chances but fell short. They started strongly and on another day Jamie Guy would have been awarded a try but the ref decided that the grounding was not good and Guy had knocked on.

Chester increased their lead when Alex Reed bulldozed over from the 22. Reed, Chester’s replacement second row may not have been fast but he refused to be tackled and just kept rolling on. No conversion but if the score remained at 19 – 7 there would be no bonus point for Dale.

The Greens fought back and good work from forwards and backs, especially stand in scrum half, Tom Davidson, allowed Josh Burridge room to crash over for an unconverted try. 19-12 and the bonus point was back in the bag.

From the restart George Hedgley made yards carrying the ball and it seemed Dale were making progress. Another mistake led to Chester possession and 13 phases later they were awarded a penalty in front of Dale’s posts. The bonus point seemed lost with 2 minutes to go when Bennett landed the shot to give Chester a 10 point lead.

Then the last minute reprieve. Barrett’s restart was collected by Chester who went through 5 phases before dropping the ball. Dale worked their way up to Chester’s 22 and won a penalty. Up stepped Barrett, Mr Cool.

All credit to Chester for, as their Chairman said, winning ugly. It was not a pretty match but there was plenty of incident and tension, especially amongst the travelling faithful. Dale played hard and could have won this game. At times there were inconsistencies in passing and tackling, also the line out was far from perfect. 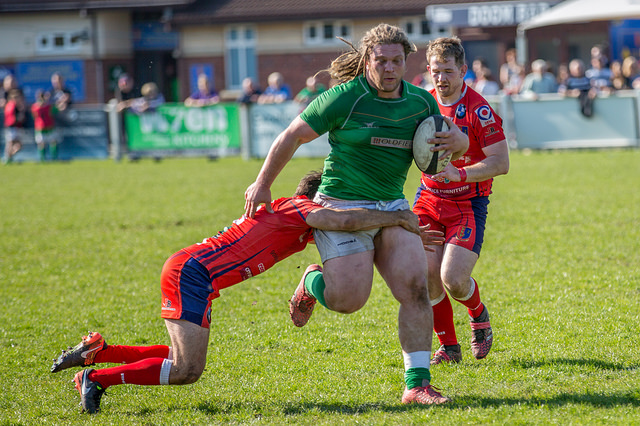 Adam Howard in action at Chester

To describe the Chester tries as soft would be to deny the skill of the Chester players. The second try was superbly worked. It was almost a Ford Classic, as he is known for running from the back of the scrum and then giving a precise ball to a back running at speed. Preston was through the Dale defence before they had blinked, a sublime move and one to enjoy.

In the after match scramble for results it was realised that the point gained was not so important as Sheffield Tigers had lost a thrilling match against Tynedale with, in a finish similar to the match above, penalties were exchanged in the dying minutes with first Tigers edging in front and then t’other Dale winning it.

Among the many who travelled to Chester were Wharfedale U12’s, as part of their tour. They were the ball boys for the afternoon as well and enjoyed spending time with the 1st team. The heroes won a special one off competition against the seniors after the match. One weary spectator commented that “I now go to all the away matches as I don’t want to miss the first away win” – see you at Preston then at the end of the month. Chairman’s wife, Claire Baker, summed up the afternoon for many of the travelling faithful by saying at the pre-match lunch “Looking forward to a great match and the prosecco!”.

Many are looking forward to another visit to Chester next season. The club has perhaps the best facilities that we have found in National 2 North.