The sun shone and a good crowd of 700 was treated to a traditional local derby at the Avenue. There was little between the teams and Dale took their chances to win a close encounter.

Wharfedale took the lead after early pressure was rewarded with a Jack Blakeney-Edwards penalty.

Excellent work by the Green Machine was only spoiled early on by a few handling errors which gave Otley field position.

The visitors had an attacking line out 10 yards from the try line. The first option of using their strong rolling maul ended with Rob Baldwin flooring the catcher before the drive was set. Otley then worked space on the left wing for Henry Roberts to touch down. This was a clever move as the Dale defence was fairly easily beaten by quick hands and extra men in the line creating a simple overlap. Ben Smith missed the difficult conversion but Otley now held the lead which they kept until half time.

It was Otley’s resolute defence which stopped Dale scoring in the last 20 minutes of the first half. Dale had camped in Otley’s 22 for long periods and were hammering away at the try line. The only cost to Otley was a yellow card for their No 7, Williams Burns.

Dale opened the second half with a try for Matt Speres after Sam Gaudie took a quick penalty tap and opened up the Otley defence. His off-load was ignored by Rob Baldwin but snapped up by Speres who broke free and carried the defence with him over the line. The try was a fitting reward for Speres who, on his first league appearance for Dale, had an outstanding afternoon. Blakeney-Edwards’ conversion did not trouble the uprights but Dale had now nudged ahead. Minutes later Ben Smith levelled with a penalty shot from 36 metres.

Dales broke the deadlock after a period of sustained pressure ended when they moved the ball wide and found Rob Baldwin on the left wing who crossed to score. Baldwin could have touched down near the touchline but had the good sense to make the extras easier and move nearer the posts (or was he looking for someone to hit before he scored?). Blakeney-Edwards converted to make the score 15-8. It had been Sam Gaudie who pressed Otley deep into their 22 with a sniping run; the forwards piled in and a few pick and goes sucked in the defence. Blakeney-Edwards sent the ball out to Chris Walker in the centre. Walker’s long pass gave Baldwin a simple stroll over the line. 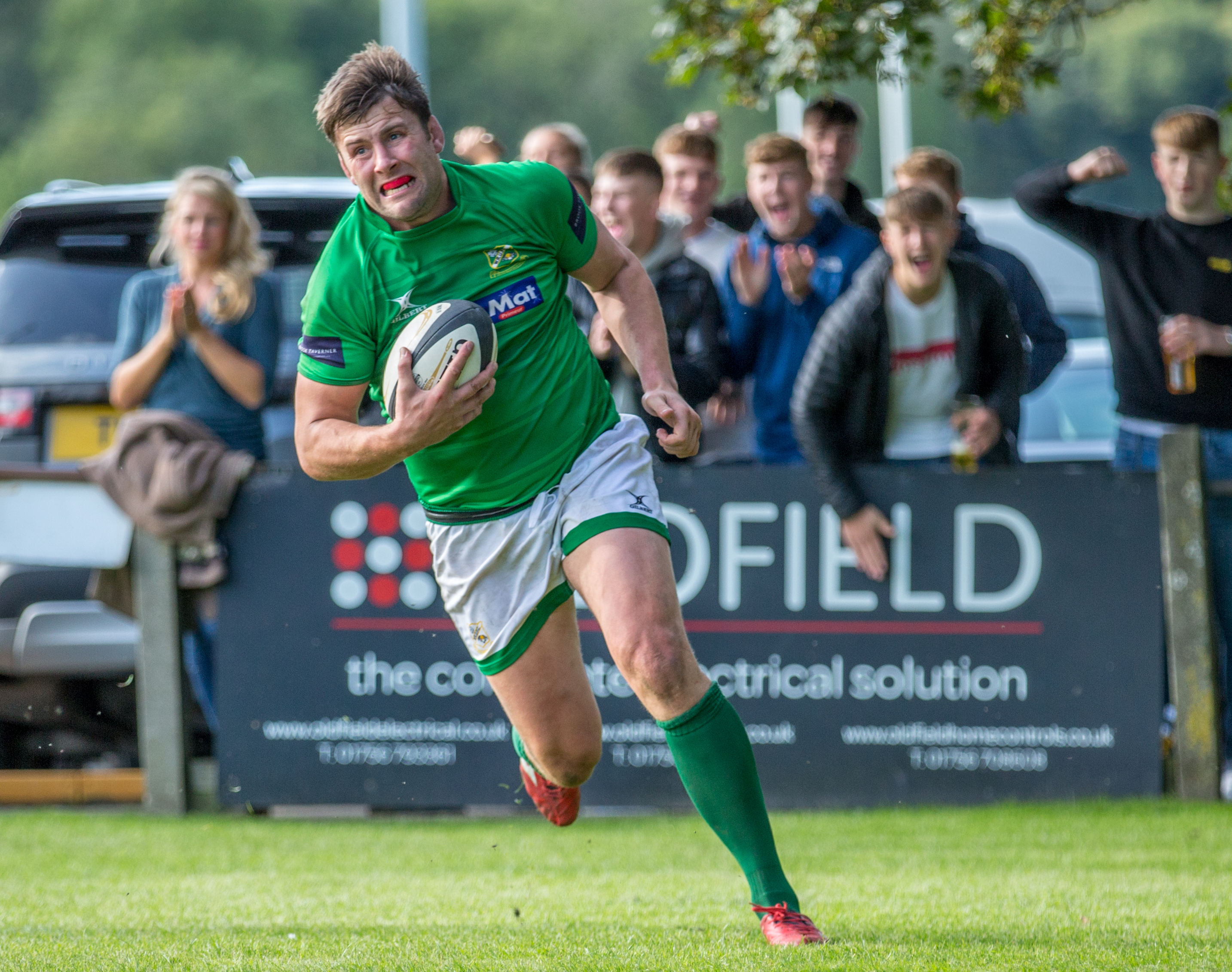 Otley threw everything they had at Dale in the closing period but the Green line held to give Dale the win and Otley returned home with only a bonus point. The siege was broken on occasions by clearance kicks being chased by the backs and stopping Otley from running the ball back. New boy Oscar Canny was central to this but all the backs were involved. One such break out was followed up by a good attack with Oscar Canny touching down. The attack was brought back for a scrum to Otley for a forward pass.

Otley came very close on one occasion to a second try but the well positioned Ref’s Assistant said that the ball was well short and held up for a 5-metre scrum. Otley’s early domination of the scrum had ended and Dale never gave an inch. A phase later and Dale won a penalty at the break down.

If Otley had the edge early on in the scrum it was Wharfedale who dominated the line out. Their own line out was very secure (one not straight and a double movement on the put in the only losses) but they took the Otley ball on quite a few occasions.

Star Man, Matt Speres, won the accolade for his outstanding performance throughout the match. There were other performances that the faithful commented upon after the match. Oli Cicognini’s work rate was superb; always looking to get involved in attack and defence. Sam Gaudie caused Otley problems and his last-ditch tackling helped keep the Green line intact. The tackling was consistent throughout the squad. Early ball handling mistakes were soon forgiven as the team worked together to keep the ball moving.

Take the early scrums out of the equation and the Green Machine had a profitable afternoon. The much-vaunted catch and drive of the Otley pack was kept at bay and all the forwards took their share in ball carrying.

A great start to the season. A fitting tribute to Chris Baker who spent his last afternoon on the scoreboard (hopefully the new scoreboard will appear for the next home game!). The day marked the 70th Anniversary of Chris’s 1st ever appearance in the famous Green. Hopefully the youngsters who started today (Will Smith and Oscar Canny) can celebrate something similar in 2089!!!!!

Please read, and whilst disappointing it was expected considering the current situation.

⚠️ Latest Update ⚠️
@EnglandRugby have said we will still remain at Stage B of the Return to Community Rugby Roadmap.

The season will NOT start in September and fixtures will be amended.

Click on the link below for more details 👍🏼
#WRUFC #OneTeam
https://www.wharfedalerufc.co.uk/mini-workforce-day-thank-you/

Please click on the link below for more details.
#WRUFC #OneTeam
https://www.wharfedalerufc.co.uk/important-club-membership-update/

Welcome to the Green Machine Ryan 👍🏼💚