In ideal conditions for running rugby at the Avenue, a healthy crowd of almost 600 saw Wharfedale run out winners over Macclesfield Blues in a closely fought and entertaining game.

Early breaks from Bullough and Lovegrove, well supported by Gaudie and Burridge, came to nought as the Greens were penalised deep in the visitors 22.

Macclesfield opened the scoring with a well worked try that saw forwards and backs combining well. After 13 phases of play space was made out wide and Nyemba crossed for a try. The try was converted by Morton.

A knock on from the restart gave Dale field position and, after surges by Lovegrove and Cicognini, Gaudie sniped over from close range for an unconverted try.

Further powerful running from the impressive Lovegrove, probably having his best game in a Green shirt, saw the home side take the lead when, after a steal by Leacock and a break by Mann, Hedgley went over after good hands out wide from Tyson. 10-7. 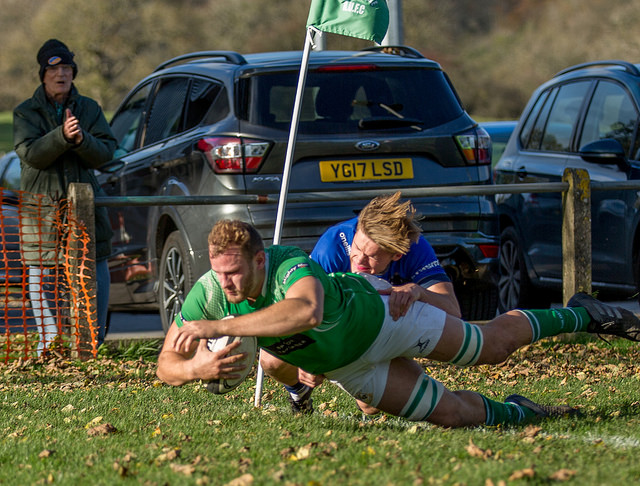 A charged down kick in Wharfedales’ half saw the Blues come back strong and with good hands out wide they went over for a well worked converted try from Parry.

Solid forward play from Wharfedale, with good interplay involving Walker, Tyson and Ward, laid the platform for Mann to put Cicognini over in the corner. The conversion hit the bar before more good support play, after a steal by man of the match Burridge, saw Bullough cross for the Greens fourth try.

An action packed first half came to a close with the home side leading 20-14.

With both sides looking better with ball in hand and the visitors fly half Morton starting to run the show, Macclesfield were probably a little unfortunate to just come away with a solitary penalty by Morton to show for their efforts and early second half dominance.

More good play from Macclesfield, coupled with resolute defence by Wharfedale, saw them finally break through and regain the lead with a try by the impressive centre Davies. 20-22.

Another break from Davies, followed by Morton, saw Macclesfield go close to extending their lead and only a knock on with the line open brought the move to a halt.

The Greens scrummage then took command and after a number of infringements, and a yellow card for Macclesfield replacement prop Berry, Burridge crossed from a push over. Blakeney-Edwards was successful with the conversion as he was with a penalty shortly after following a further scrum misdemeanor.

A good break from Macclesfield No.8, Rees, halted illegally by Lovegrove who was given a yellow card, saw Macclesfield awarded a penalty which was accept with aplomb by Morton and brought the score to 30-25 going into the final minutes.

As Macclesfield surged forward late on looking for the winning score, a handling error on half way, forced by Hedgley, saw a breakaway try from Woodhead on the stroke of full time.

In a close game with all eight forwards putting in a sterling 80 minute shift, and the backs looking dangerous throughout, another 5 point victory will have warmed the hearts of the Greens faithful.

Some tackles were missed at times, but on the whole the defence was solid and held firm.

Although Burridge picked up the Star Man award he was run close by, among others, Lovegrove, Walker, Tyson and Hedgley.

It’s Rugby – But Not As We Know It

Please click on the link below for a club announcement about Peter...
#WRUFC

Happy memories! We will be back...

Grassroots shirts from across the country on the seats of Twickenham 😍

We want to see your photos of you supporting from home 📸

Put on your club shirt at home, tag us in your photos and we'll share the best 🙌