A feast of 9 tries was just edged by Wharfedale although a spirited Lions fight back meant the result was in doubt until the final whistle. Dale led by 13 points to 8 at half time and opened up the second half in confident style. The home side stretched the lead to 19 points before a resurgent Lions side made the match close.

Both sides made errors in the opening exchanges but it was Dale that paid the price. A knock on gave Lions a scrum on Dale’s 10 metre line. Second phase ball was run by Devon Constant who created space for Edward Sumpter to charge through. Missed tackles allowed him into Dale’s 22 and then four phases later the visitors opened the scoring with good handling and grabbed the first try with John Murdoch touching down for an unconverted score.

Dale took the lead with two penalties by Jack Blakeney-Edwards. Both penalties were the result of good aggressive running from Dale and also the pack dominating the set piece. A third attempt during this period also went close. The stand off then skipped through for a try to which he also added the extras. Blakeney-Edwards left two tacklers on the deck in scoring and had he not scored there were at least three other green shirts in support. A Harry Key penalty for Leicester ended the scoring in the first half. Leicester spent most of the last 10 minutes of the first half on the attack but the Dale defence held. Key had other opportunities for goal and seemed eager to have a go when he had a chance from his own half, close to the right-hand touch line. After that, however, much easier chances were either run or kicked to the corner. With seconds to go Ben Leacock stole a line out and a phase later Phil Woodhead kicked the ball dead. 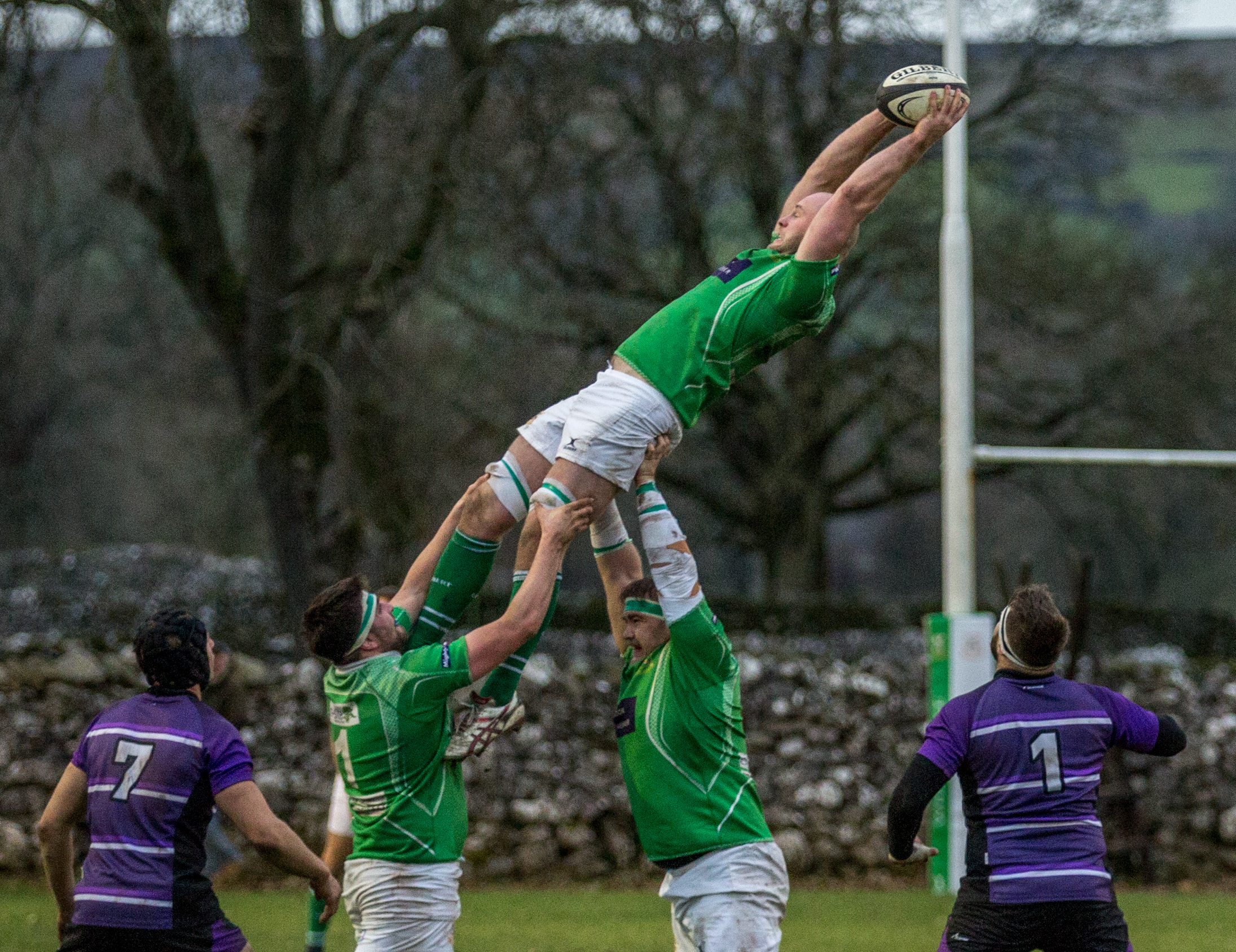 Phil Woodhead opened the scoring for Dale in the second half with a converted try and then Rhys Lovegrove also touched down. Blakeney-Edwards was again successful from the tee.

Lions hit back almost immediately with tries from Devon Constant, Alex Wilcockson and Max Titchener. Only one of these was converted to leave the score 27-25.

Wharfedale regained their composure and a great retake from the restart by Kieran Frost led to good field position for Dale. This was followed up a minute later by a strong tackle from Harry Bullough with Oli Cicognini and Ben Blackwell on hand to force the penalty decision for not releasing. A kick to the corner led to a catch and drive and another penalty. This time Dale opted for the 5 metre scrum. With James Tyson in the sin bin for a no arms tackle Cicognini added his considerable bulk to the pack. With cries of River echoing around the Avenue the pack drove to the line and with Lion’s infringing and stopping the momentum, the referee went under the posts.

Dale now had some breathing space and they needed it as with three minutes to go Devon Constant got his second try. No conversion but the gap was now only four points. With strong tackling, including a Jack Hirst cruncher, Lions were pinned back in their own half and Dale clung on to the victory and a hard earned 5 points. Lions were very good value for their 2 bonus points and could have had more.

The introduction of Joshua Leonard on 55 minutes transformed Leicester Lions and he upped the tempo of their attack. Devon Constant was a thorn in the flesh of Wharfedale all afternoon. He scored two tries but was also competing for the ball all over the park.

Take away that 10 minutes in the second half, when Leicester scored three tries, this was a solid performance from the Greens and they have now won three games on the trot and are sixth in the table. The front row was powerful all afternoon and there was no let up for the Leicester pack when Joe Altham and Reece Ward were replaced by George Martin and Jack Hirst. The back 5 worked tirelessly all afternoon and the backs also played their part. George Hedgley again led the team well. He was supported by Josh Burridge whose tackle count was outstanding.

Yes, there were mistakes, but, as with last week away at South Leicester, this team won the match that, in the past, has tragically been thrown away. Things are never easy at the Avenue.