Wharfedale rounded off their pre-season with a well-deserved victory in a hard-fought encounter with National 1 Rotherham Titans.

Titans kicked off deep and although Dale cleared, the ball did not find touch and was run back hard by No 8 Seb Nagle-Taylor. Quick ball movement from left to right saw full back Tom Allott take the ball at pace and cut through to score out on the right with just over one minute on the clock. The conversion was missed but this was an ominous start for Dale. Ultimately, however, that was about as good as it got for Rotherham. Wharfedale dominated the next 10 minutes but, despite a neat break by Will Bell and some powerful runs from the forwards, were unable to find a way through resolute Titans defence, relieved by a couple of long clearances from Ellis Abrahams. A loose pass by Ben Parkinson gave Rotherham the chance to break and they should have extended the lead but a superb tackle by Dan Stockdale stopped Nagle-Taylor under the posts and excellent work over the ball by James Tyson won a relieving penalty.

The remainder of the first half was very tight with Dale having the majority of the territory but, despite plenty of possession, being unable to break through. When Titans did break out and exert pressure on the Dale line, an immense defensive effort culminated in George Hedgley stealing a 5m lineout and a clearance from Phil Woodhead. The next attack was stopped by Matty Houghton getting over the ball at the tackle to win a penalty. From a lineout on halfway, the green pack drove Titans back and Woodhead chipped through for the ball to roll into touch in Titans 22. Titans hooker Ali Thomson overthrew the lineout which was stolen by Tyson to set up a further period of sustained pressure – but again repelled by robust Titans defence who eventually cleared with a penalty to half way. This time, Thomson’s throw was not straight, Dale took the scrum and drove Titans back 5m to win a penalty. Whilst the two front rows were discussing the merits of their respective performances, Woodhead took a quick tap but was eventually run into touch in the 22. As the half drew to a close with Dale’s pack dominant and Titans getting increasingly frustrated, flanker Luis Ball was yellow-carded for a high tackle on Hedgley and, within a minute, fly-half Joe Barker was yellow-carded for bringing down a driving maul and Titans ended the half with 13 men and a slender 5-0 lead.

Despite the 2-man handicap, Titans started the second half strongly, keeping the ball tight and making some powerful drives upfield to eat up time until a loose pass brought a scrum and Dale were able to use the numerical advantage to drive Titans back down the field. From a 5m lineout, with Titans back to 14 men, the ball went to Will Lawn at inside centre who made a half-break for a slick offload to newcomer Will Edwards who was brought down just short but Woodhead fed quick ruck ball to Hedgley who crashed over for a try. The conversion was missed but at 5-5 Dale were back in the game. With Dale’s pack increasingly on top, Titans lost shape and discipline with Barker penalised for a late tackle on Rhodes and Rikki Stout lucky to escape with just a penalty for a shoulder drive into George Martin’s ribs round the side of a maul, but referee Jamie Leahy giving Titans’ captain Nagle-Taylor a lecture on the need for restraint. Edwards put the penalty into the corner, Rhodes took a clean catch at the front of the line-out and the pack drove over the line with flanker Houghton claiming the try which was enthusiastically celebrated by the forwards. Edwards was again off-target with the conversion.

Rotherham raised their game from the restart and with Nagle-Taylor to the fore, attacked hard but poor handling allowed a couple of scoring chances to go begging. As Dale tried to clear their lines, Edwards’ clearance kick was charged down by Barker who picked up to score under the posts. The conversion by Abrahams put Titans 12-10 ahead with under 10 minutes to go. With replacements aplenty on the pitch, and hooker Stockdale and 17 year-old Madison Hunting making up an unlikely back-row, this had been a good workout for Dale but they were not quite finished. Strong runs by Parkinson and replacement hooker Tom Jackson won a penalty which Rory Macnab drilled into the corner. When Woodhead was dispossessed at the base of a ruck, it looked all over but Titans kicked into touch to give Dale one last chance. Rhodes took the ball cleanly but the drive was stopped illegally. With time now up, Macnab kicked the penalty into the corner, Stockdale found Rhodes again and this time the pack were not to be denied, with Joe Altham being driven over for the try, superbly converted from the touchline by Macnab for a final score of 17-12. This was a thoroughly deserved victory for a squad that have worked hard all summer and who are developing into a close-knit unit. 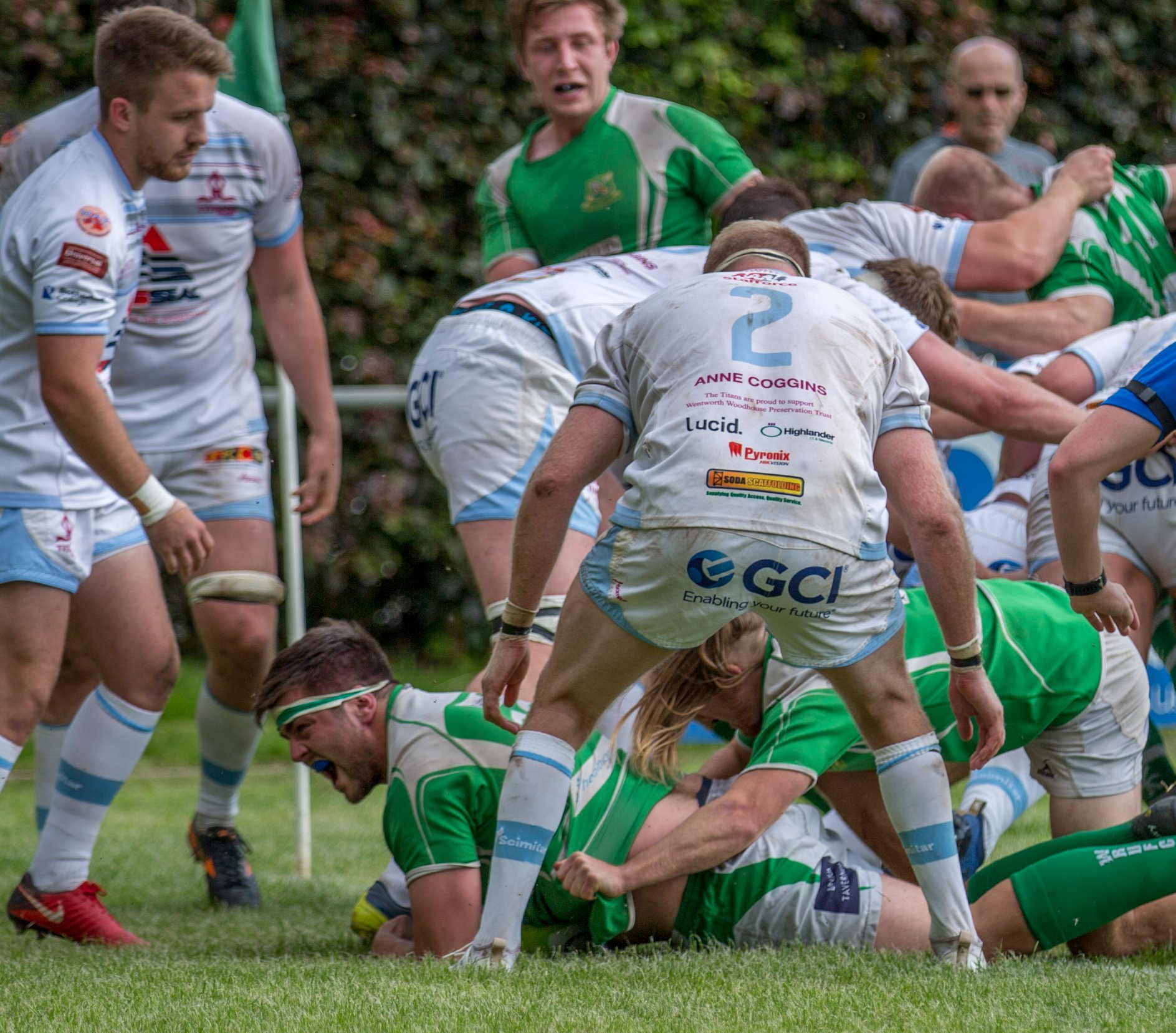 Both sets of coaches were very pleased with the intensity of the workout before the league season starts next week. What did we learn? Having lost pretty much an entire 30-man Championship squad, Rotherham have a huge challenge to build a team out of their summer signings but can only improve as they learn to play better together. Dale will go into the season confident that they have a solid scrum and a line-out that can compete with anyone. New recruit Will Edwards looked composed at 12 and then 10 after Will Bell was withdrawn. The defensive organisation was strong and no-one took a backward step against bigger opponents. Up front, the forwards are a settled, experienced unit in which every player made major contributions in attack and defence and Callum Lockett performed with great promise at no 8 in place of the injured Josh Burridge. The stage is now set and the squad are looking forward to the season with confidence.