When Tynedale visited the Avenue earlier this year nobody thought that conditions could have been worse. Back in February there were periods of fair weather. Last Saturday the wind and rain did not relent at all and it was not a day for fast flowing back play, more a day for the purist. Mistakes were made but congratulations to the men on the pitch.

The Dale pack dominated the set piece and the Dale defence kept the usually high scoring visitors from crossing the whitewash.

Wharfedale pressed Tynedale from kick off and had chances to score but the visitors defence held. Tynedale only escaped from their half on two occasions; once for a scrum on Wharfedale’s 10 metre line and then for a line out. The scrum saw Wharfedale drive them back to earn a penalty and the line out was stolen by Kieran Frost. The best chance was a driving maul which was pulled down by Tynedale’s Ben Bell, the offence earned him an early yellow card only 12 minutes into the game. The sustained attack only yielded a penalty landed by Jack Blakeney-Edwards.

The Green Machine was soon back on the attack with Blakeney-Edwards making a good break up to the visitor’s line and a driven 5 metre scrum led to a penalty try.

An odd couple of penalties soon gave Tynedale a lineout in Dale’s 22 but the throw was not straight and the scrum led to a Wharfedale penalty. Tynedale could not get their phases together and Wharfedale were dominating both the scrum and the line out. Before half time the Green Machine had another 5 metre lineout but with cries of River coming from the damp huddled masses the referee decided that a player had got in front of the catcher and was therefore guilty of obstruction. Tynedale’s best chance of scoring followed with a break from left wing Morgan Passman. The touch line saved Wharfedale with Passman well short of the try line and Dale scrambling to cover. Tynedale strived to get into the home 22 but Wharfedale kept them well away from the try line. A long kick by Blakeney-Edwards was chased by Oli Cicognini and Joe Altham. Ben Blackwell arrived and an excellent counter ruck led to a penalty. Dale went for the corner looking for a second try, but Tynedale held the catch and drive. An offside gave Dale a penalty in front of the posts which was converted by Blakeney-Edwards to lead 13-0 at half-time.

This had been an impressive 40 minutes from the men in green. Hardly a mistake was made and they were showing that they could play solid controlled rugby.

Wharfedale failed to escape from the start of the second half and Tynedale got a kickable penalty. This was accepted by Robert Parker to get them on the scoreboard.

Blakeney-Edwards then set up field position for Wharfedale with a well-placed kick into Tynedale’s 22. Dale stepped up the pressure and Tynedale were giving away penalties and received a warning from the referee. A five metre line out led to a good catch and drive which was stopped illegally. Dale played through the advantage and James Tyson broke off. Sam Gaudie was fed the ball and had the speed to reach the line on the outside to touch down. Blakeney-Edwards’ conversion bounced off the bar and a post before falling down on the wrong side. 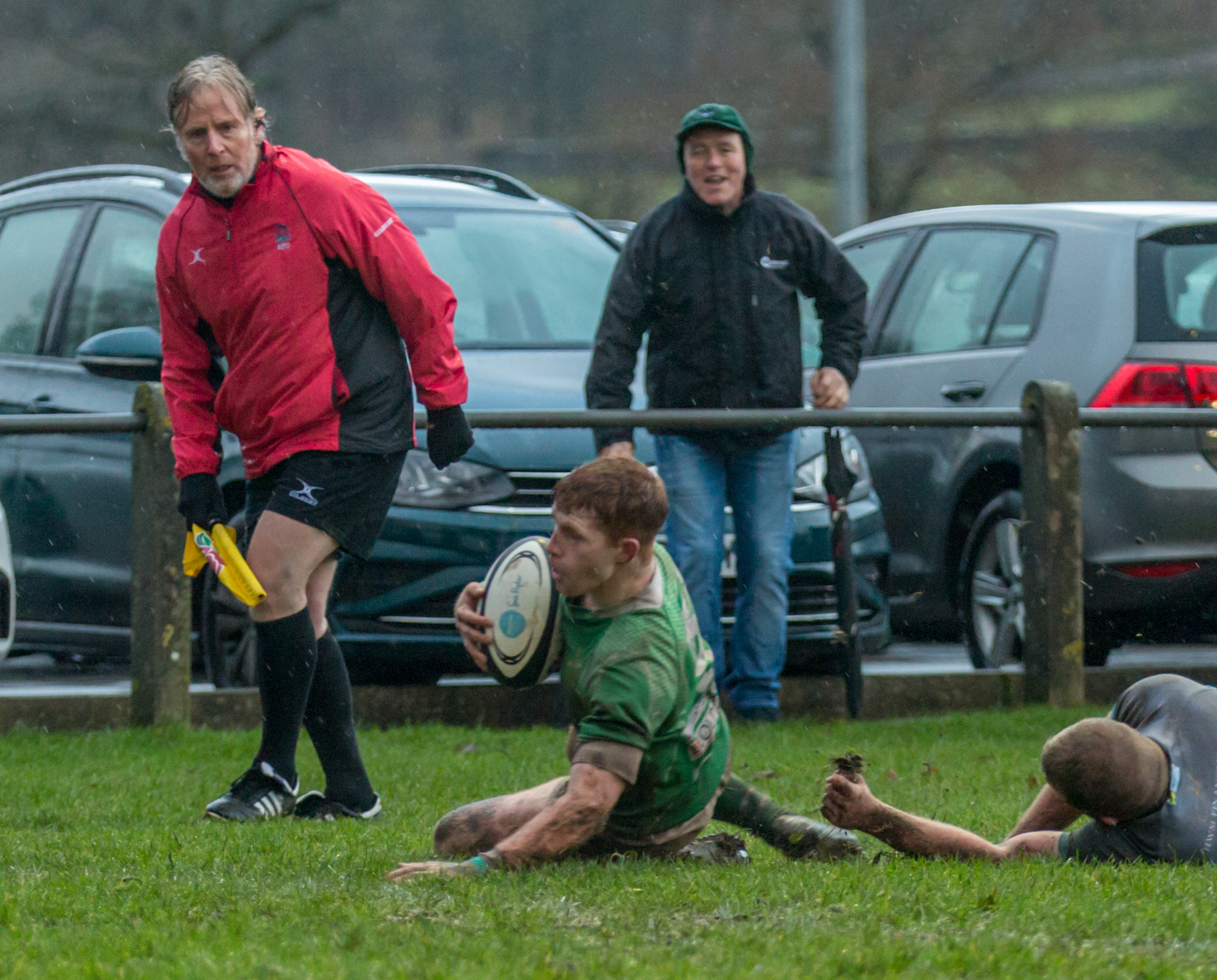 Sam Gaudie on his way to his try

Tynedale had probably avoided a yellow card by Gaudie’s try but they did not escape 2 minutes later when Cameron Nordli-Kelemeti was harshly adjudged to have gone off his feet when competing at the break down; 10 minutes rest was his reward.

The wind and rain got stronger as did Dale’s resolve. Dale then closed out the game with controlled rugby to finish the game with the spoils. In true rugby fashion there was no dancing around when the final whistle went, no jumping up and down in a circle reciting a tribal chant. There was great respect for the opposition, shaking of hands and the usual tunnel and three cheers. Pints were exchanged in the clubhouse. Both sets of players deserved applause for sticking to their task in somewhat atrocious conditions that just got worse as the afternoon wore on.

It was also a difficult afternoon for the officials. Mistakes were made on the pitch by all who took part – Dale made the fewest.

After much vacillating George Hedgley got the nod as Star Man for the Rugby Paper. Hedgley was one of many players who were outstanding all afternoon and got the award on behalf of the team. The back three of Harry Bullough, Oli Cicognini and Rian Hamilton were totally secure under the high ball. Cicognini also caused problems going forward and around the breakdown. Sam Gaudie kept appearing anywhere on the pitch and showed how well he now reads the game. Jack Blakeney-Edwards was tidy at stand-off and his kicking game gained many valuable yards. The centre pairing of Rhys Lovegrove and Ben Blackwell was resolute in defence and Ben Blackwell showed his strength going forward and forcing turnovers. Will Lawn came on near the end and nothing was lost in Dale’s play.

Much has been said of the Wharfedale forwards this season and this was a game for them to shine in the gloom. They worked hard for the full 80 minutes and never allowed Tynedale to get a foothold in the contest. Apart from a couple of referee’s calls at the scrum the Green Machine was awesome. Great work here by the front row combination of Joe Altham, Dan Stockdale, Toms Asejevs and Jack Hirst. Not only did they spend time in the front row but all lined up to take their turn at ball carrying, clearing out and tackling.

Stockdale made light of the conditions at the line-out, finding his jumper time after time. Kieran Frost was a real nuisance to the Tynedale line, whilst Hedgley and Josh Burridge took most of our own ball. When Ben Leacock came on to the field a polite Scotsman commented that Dale had never had such tall locks – both Frost and Leacock measure 6’ 7”. There was no let up of intensity from the back row. Josh Burridge, James Tyson, Matty Houghton and Chris Walker were always combative and put their bodies on the line time after time.

Well done to the coaches for making adjustments from the last couple of weeks. The coaches, led by Jon Feeley, will say that this was a collective performance by all at Wharfedale.

There was a different atmosphere amongst the faithful as this controlled performance meant that Dale never looked in danger.

There are two difficult away games left before the Christmas break and the much-anticipated Boxing Day festivities with dear friends North Rib. Dale are comfortable in 9th place but oh what joy it would bring to all concerned if we could get another couple of wins. I would happily forgo a few Christmas presents if the lads could deliver at Huddersfield and Sedgley Park.

NB Well done to the volunteers on the day; on the gate, car parking, selling raffle tickets, taking photographs, ball boys, scorer etc. – Not a day to be outside but as the lads did on the pitch everybody carried out their tasks superbly. Sorry if I missed someone off – I’ll buy you a pint on Boxing Day.