Stourbridge, playing into a strong breeze, dominated the first 30 minutes and established an 18-point lead. Dale only had the ball for six phases during this time whilst Stourbridge controlled the ball superbly.

Stour’s first try came from controlled ball in their 22 and then a brilliant run from full back Mark Harrison to touch down. Rickie Aley converted.

Wharfedale seemed to have survived the next onslaught and turn the ball over close to their line but careless play allowed George Morgan to scoop the ball up and score. Aley again kicked the conversion.

Dale got on the scoreboard with a Jack Blakeney-Edwards penalty before Stour’s scrum half, Joseph Heatley popped over the line for a converted try.

Stour looked to have another break which should have led to a try but a finger-tip tap tackle by Harry Bullough saved the day. Wharfedale then managed to get hold of the ball and pin the home side back in their 22. Sam Gaudie burst over to touch down and Blakeney-Edwards added the extras. Dale ended the first half with another try after a break from Bullough took the play up to Stour’s line. Stourbridge could not break out and when they attempted a kick it was charged down. Oliver Cicognini pounced on the loose ball to touch down. The wind just took the conversion past the upright but Dale ended the half only trailing by 21-15.

Dale opened the scoring in the second half with an unconverted try from George Hedgley.

An Aley penalty was followed by a well-constructed try from Stour with Daniel Rundle speeding over for their fourth converted try.

Blakeney-Edwards finished off a break to score Dale’s bonus point try, his conversion closed the gap to 31-27 and the faithful were now looking at gleaning 2 points or even snatching victory. 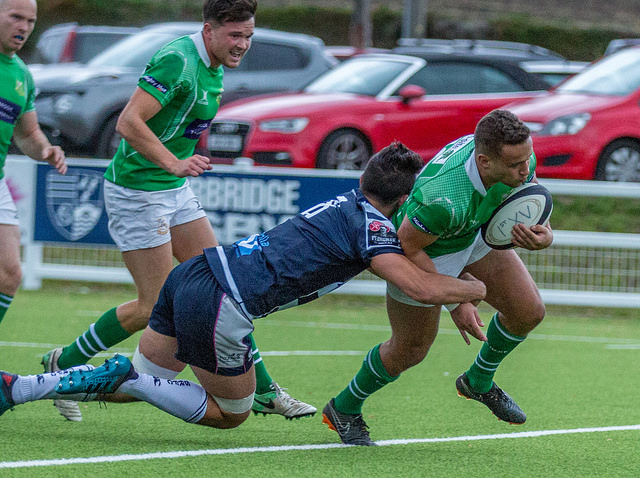 Two accurate penalty kicks from Aley denied Dale the second, losing, bonus point. The second one was the last kick of the game and only just crept over.

Stourbridge deserved to win the game, especially after their control in the first 25 minutes. Dale also deserved the second bonus point but it was not to be.

The Wharfedale players accepted that the start was not good enough and were full of admiration for the way that Stourbridge controlled the ball in the first quarter. The strong wind was a problem for both sides and playing into the wind was not really the bonus it should have been – both sides struggled with kicking in the conditions and the result meant that a running game resulted. The second half was a hard-fought contest and an entertaining affair.

Both sides struggled with the ref and his control of the break down. Josh Burridge suffered when he was yellow carded for not rolling away at the end of the game. Josh was not upset about the yellow card for a technical offence, he was however upset at being mistaken for George Martin who was the player lying on the wrong side. Josh did however have a positive in that the Rugby Paper had him down as scoring a try in the 47th minutes when it was actually George Hedgley who touched down.

There were positives to take back to the Avenue. Jack Blakeney-Edwards was awarded the Star Man accolade for an outstanding performance. He handled the conditions well and sparkled with ball in hand. His best kick ended the first half when he sent the ball from his own 22 to roll into touch 5 metres from the Stourbridge line. The backs in general had a strong game with Harry Bullough continuing to impress on his return to the 1st team. If you ignore the sluggish opening Wharfedale competed with Stourbridge and proved to be a match for the strong Midland outfit.