A hard fought game at Park Lane saw the home side edge the final scoreline by 20 points to 15. The lower sides from the Tigers, resplendent in fancy dress and sampling copious amounts of the amber nectar, gave proceedings a festive, good natured on the whole, atmosphere.

The Tigers started strongly and took an early lead when a reverse field kick saw full back Riley cross unopposed under the sticks. The conversion from Collins was a formality and the hosts were 7 nil to the good after just two minutes.

With Sedgley Park looking to extend their lead it took good defence from the Greens to keep out the home side. The Sedge back three looked menacing and, with Collins starting to run the show with nifty inside passes to bring backs and forwards alike into the game, it was full credit to the visitors that they kept their line intact.

Gradually Wharfedale got a toe hold in the game and Rian Hamilton went close after being put away by Ben Parkinson. The wingers kick and chase was thwarted when he knocked on a bouncing ball with the line open. Hamilton was unfortunate again shortly after when an intelligent kick to the corner from Jack Blakeney-Edwards saw a wicked bounce evade the Dale number 14.

Sedgley Park came back strongly and only a wayward pass and subsequent knock on stopped them adding to their early score. Pressure on the Wharfedale pack, an unusual occurrence this campaign, saw the home side awarded a penalty but their excursion deep in Dale territory came to nought.

A sustained period of Wharfedale pressure in the Sedge 22 saw a number of penalties awarded to the Greens and, with Burridge, Walker and Leacock to the fore, they battered the home line. After Blakeney-Edwards went close it was left to Hedgley to crash over from short range. The conversion was missed, amidst a small minority of ill mannered jeering from the clubhouse balcony, and the players went in for oranges with the half time score Sedgley Park 7 Wharfedale 5.

Shortly after the restart Blakeney-Edwards put the visitors in front with a penalty from close in. Collins gave the edge on the scoreboard back to the Tigers with a well taken penalty goal and approaching the hour mark the game was still in the balance at 10-8.

With the introduction of the Wharfedale bench, two players with over 100 starts for the club, one with vast Premiership experience, and another who is pushing for player of the season so far, the Greens were confident that their added power would help them take the spoils.

This certainly looked to be the case when, with backs and forwards linking to good effect, after numerous controlled phases Bullough crossed under the posts for a converted try and the visitors led 15-10. 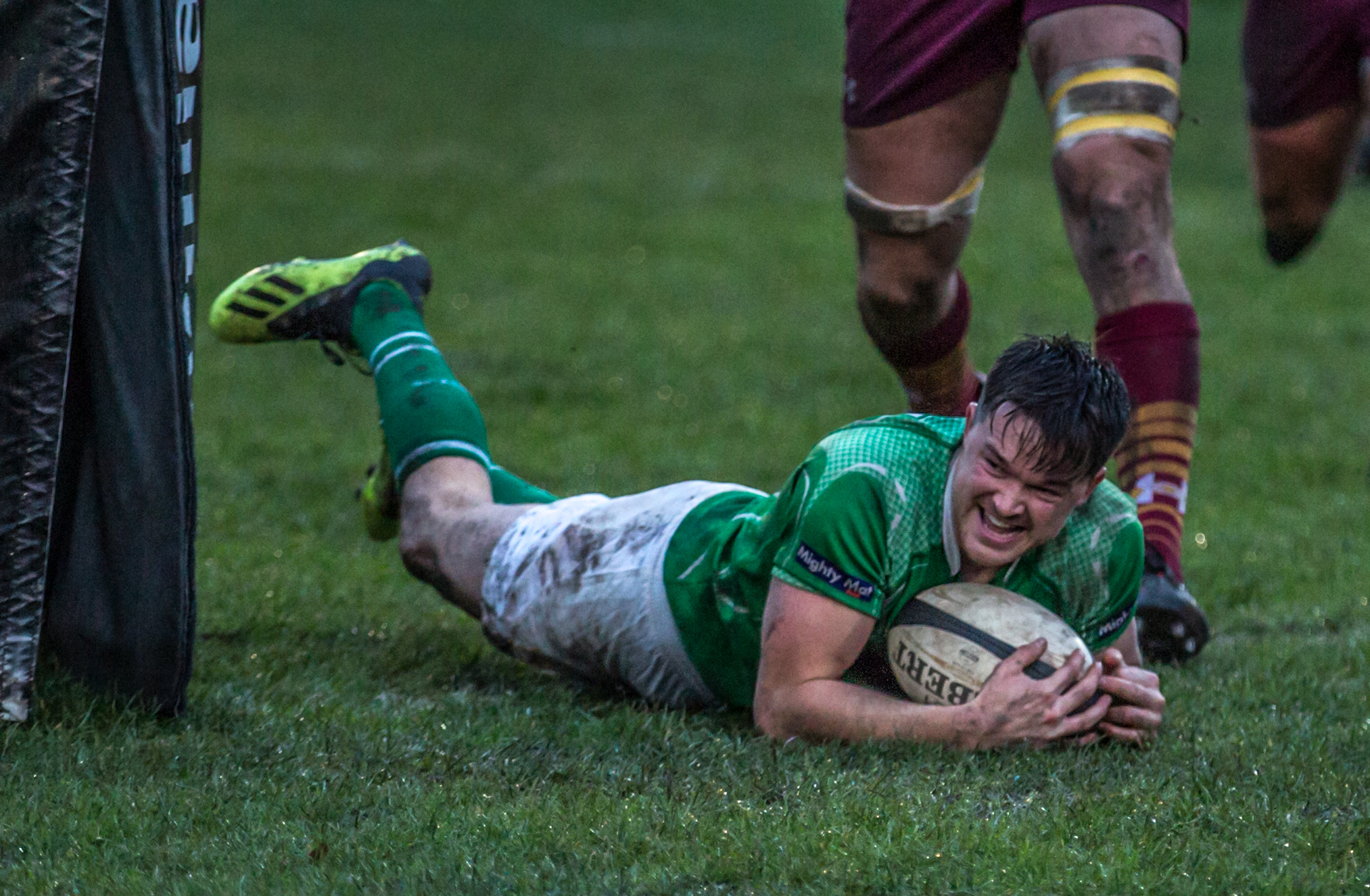 Another Collins penalty saw the home side back to within 2 points and from the resulting kick off the Gods of rugby transpired to cruelly thwart the Dale. A good chase from the Greens and a partial charge down, unfortunately, fell into the Park props hands some 15 metres in front of the kicker and in space. The ball was spun out wide to the pacy Simpson who outstripped the defence to score in the corner. An immaculate touchline conversion from Collins took the score to 20-15.

Collins had the chance to extend the Sedge lead but his penalty drifted wide. With the Tigers running down the clock the visitors were awarded a welcome penalty. A catch and drive from the ensuing line out was thwarted by the hosts and, as the clock went into overtime, the Greens set up camp in the Sedgley Park 22. Wave after wave of Wharfedale pressure, with ever impressive centre Ben Blackwell outstanding, came to nought as a knock on halted play and Mr O’Brien blew the full time whistle.

Wharfedale players, coaches and supporters can consider themselves unlucky to lose yet another close game but all 20 players put in a solid shift and can be proud of their efforts. To single out individuals would be harsh as this was a team performance. A little bit more composure and not trying to force the final pass will stand the Greens in good stead for the remainder of the season on resumption in the New Year when they welcome Hinckley to the Avenue on 5th January.

The lasting memory off the day for your scribe was, on taking a comfort break prior to the journey home, standing between Batman and Woody, from Toy Story, at the urinals !! It was just that kind of afternoon.

Please click on the link below for the club statement on the sad passing of Geoff...
#WRUFC #OneTeam #ForeverGreen https://www.wharfedalerufc.co.uk/geoff-lawn/

More great memories from The Bore 👏💚

More from the Bore 👏💚

Continuing the @WelshRugbyUnion v @EnglandRugby theme with an @wharfedalerufc v @carnegierugby game from 1996. Very much an England - Wales encounter featuring honorary Yorkshireman and Welsh international @phildaviesrugby and Colin Stephens for the visitors. #WALvENG 2

It’s wor canny lad John’s time this week, so click on the link below to read more! Remember, there’s a prize at the end of these too 👍
#WRUFC #OneTeam
https://www.wharfedalerufc.co.uk/meet-the-green-machine-john-sykes/

The third in our new series so click on the link below to read more - and remember there’s a prize at the end of these!
#WRUFC #OneTeam