A game of a half and two quarters! A good crowd turned out on a glorious afternoon to watch the season’s opener and were rewarded with a splendid game of rugby.

Wharfedale opened the scoring with intelligent play from new prop, Sam Booker. From a driving maul he peeled off to the blind side and, having dragged in the defence, a delicate and precise offload gave Will Lawn the chance to cross the line. Max Bell came close with the touchline conversion.

The home side responded quickly when they opted to kick for goal and Lewis Wilson slotted the three points. They extended their lead when skipper, David Barton, touched down for a converted try.

Tom Jackson grabbed a try from an attacking line out. It was virtually a walk in from 15 metres as Kirkby did not defend the line out. Richard Rhodes skilfully retained the ball at the front and Dale walked forward. By the time the Cumbrian side realised that something had gone wrong with their plan it was too late. Again, Max Bell was just the wrong side of the upright with the conversion. 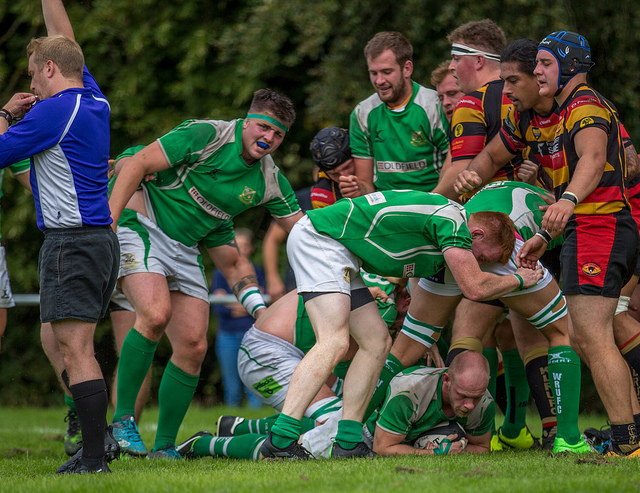 Kirkby rounded off the first half scoring with an unconverted try and a penalty. Matthew Barge ran in from half way for the try having collected a Wharfedale clearance and evading the chase to be in the clear. With the score at 18 – 10 both sides went for a huddle on the pitch.

Dale’s next try was a beaut. Superb handling and an incisive run from Kristian Sharples ended with Will Bell scoring under the posts. He also added the extras to bring the visitors to within a point.

Wharfedale were now dominating the set piece and they retook the lead when Will Lawn muscled over for a converted try. Dale had more chances to score but the Kirkby defence held.

A good game, a good performance and a lot of positives to take back to the training ground.

If there was a quibble, there always is, it was with the use of yellow cards. In a game (a pre-season friendly) played in an excellent spirit three cards were issued.

Photographs of the game are available under the Photos tab near the top of this page – follow the Link to Flickr Album.