On a day perfect for playing rugby Wharfedale had to make three late team changes for the visit to Brantingham Park with Will Edwards replacing Will Bell, Matt Houghton replacing Dan Stockdale and Ben Leacock replacing Richard Rhodes.

The first half saw both teams strive for supremacy with Wharfedale edging the possession and territory but unable to break down a stout Ionians defence.

The only score in the half came in the 29th minute when Wharfedale were penalised for not releasing and Lewis Minikin slotted the resulting penalty making the score at the interval 3–0. 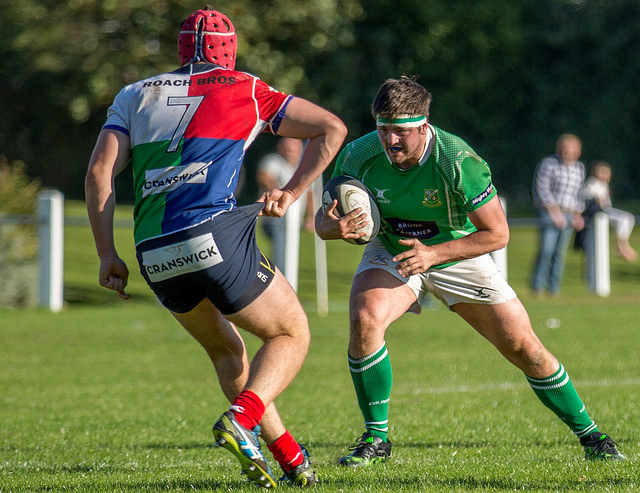 The second half saw Ionians using the slight breeze to kick for territory but this only resulted in Wharfedale keeping possession and running the ball back at them.

In the 54th minute, after a good passage of play, Wharfedale opted for a scrum 5 metres out after being awarded a penalty. The ball was spun wide for Rian Hamilton to touch down for a well worked try. The conversion was missed making the score 3–5.

On 59 minutes, whilst a Wharfedale player was having treatment, James Ticknell made a good break and off loaded to Toni Kuku who went over in the corner for a try. Lewis Minikin converted from out wide for the lead. 10–5.

Wharfedale piled on the pressure with a long period of possession, when a kick over the top resulted in a race to the line which Rian Hamilton won to touch down. Tom Mann kicked the conversion. 10-12.

Then in the 67th minute, disaster for Wharfedale. An intended dink through a ruck of players was intercepted and Lewis Minikin, raced from his own half, to score under the posts. He converted his own try to make the score 17–12.
At this point Ionians grew in confidence and kept possession very well resulting in a penalty for a high tackle which Lewis Minikin converted making the final score 20–12.

A battling performance that saw some excellent play from both Backs and forwards, the pick being Sam Gaudie and Josh Burridge with Rhys Lovegrove and Harry Bullough looking to make a good centre partnership. However it was disappointing for the third time in a row to be in a winning position in the second half yet lose the match, something for both the players and coaches to contemplate next week.