Wharfedale travelled to Lockwood Park with the team news that with two forced changes brought in Matty Houghton and Phil Woodhead in unaccustomed positions of hooker and full back respectively.

Wharfedale playing into the sun and up the slope started well choosing to run the ball whilst Huddersfield favoured kicking for territory.

In the 4th minute Wharfedale were penalised for holding and Chris Johnson slotted the resulting penalty. Wharfedale continued to dominate possession and in the 15th minute a flowing move to the left gave Phil Woodhead space to throw a sublime dummy and race 40 yards to the line. Jack Blakeney-Edwards converted from a difficult angle to make the score 3-7. 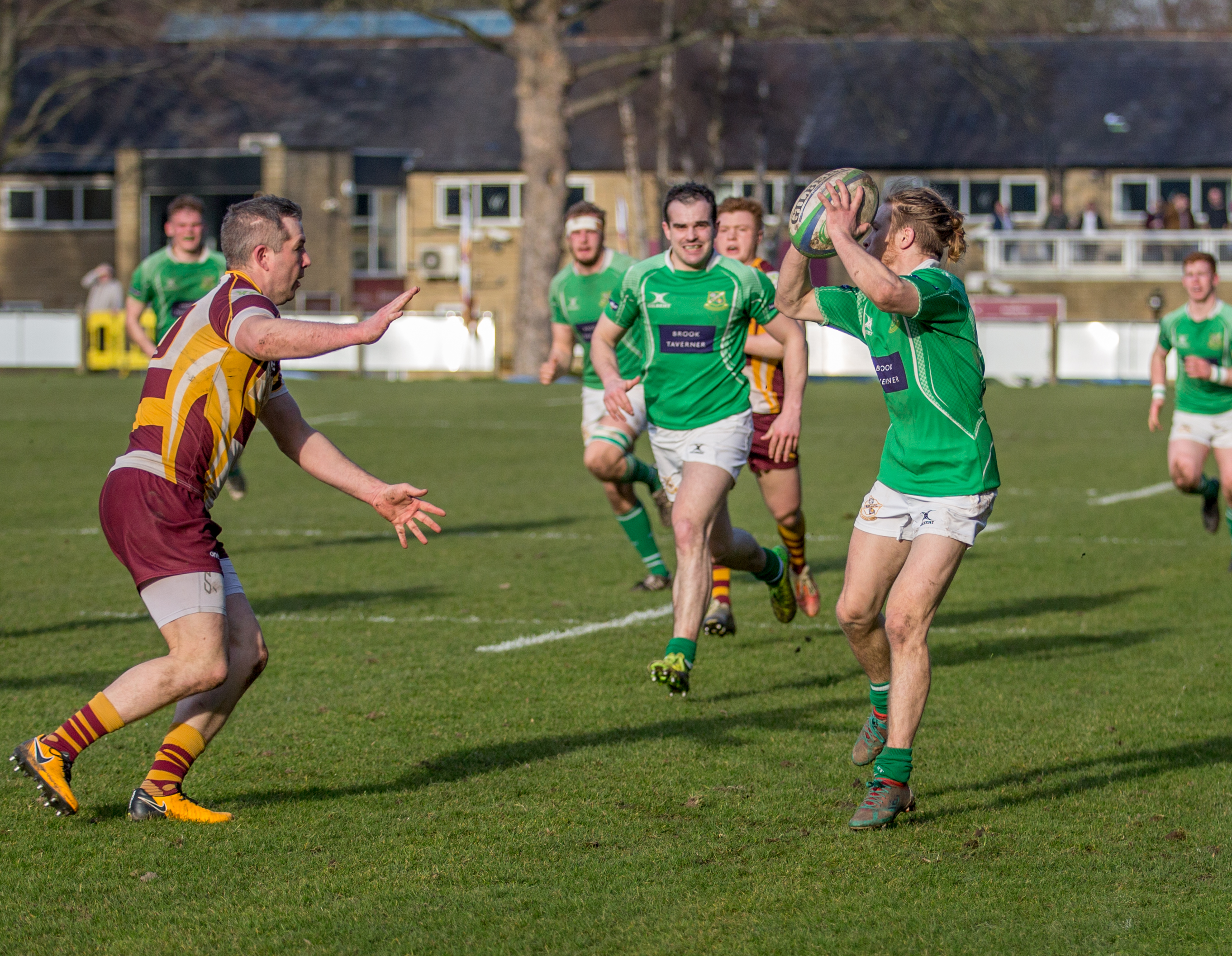 Phil Woodhead’s dummy that led to his try

From the kick off and following some untidy play, Nick Sharpe of Huddersfield was red carded for a high tackle. The next 10 minutes saw some resolute defence from Huddersfield against some free flowing rugby from Wharfedale until a high tackle from Reece Ward and some afters from Alex Battye gave them both yellow cards.

Sustained pressure from Wharfedale eventually got rewarded with a penalty by Jack Blakeney-Edwards making the half time score 3-10.

Huddersfield started the second half with great determination and a flowing move across the line to the right was rewarded with an overlap and try for Elliot Hodgson and with Chris Johnson kicking a difficult conversion to make the score all square at 10-10.

In the 56 minute Wharfedale were awarded a penalty from a scrum and Jack Blakeney-Edwards duly converted to make the score 10-13. Back came Huddersfield, who went through the phases to make space for Chris Johnson to drop a goal on the 62nd minute – game on at 13-13.

What can now be only described as tense and thrilling rugby, Huddersfield defended for their lives whilst Wharfedale attacked relentlessly. In the 74th minute, the ball was spun out to the right and Ralph Wellock feigned to go on the outside, but chose a great line on the inside to score a superb try. Jack Blakeney-Edwards slotted the conversion, score 13 -20.

That left a nail biting 5 minutes for Wharfedale to run down the clock which they did with great skill by keeping possession.

This was a fine performance by Wharfedale but it has to said that Huddersfield put up a great fight with 14 men and justified their lofty position in the league. Wharfedale’s scrum and lineout were solid. Great credit must go to Matty Houghton playing hooker for finding his man at the lineout.

It is hard to pick out individual’s, Ralph Wellocks excellent try, the two centres, Harry Bullough and Will Edwards combined well, the pack were dominant led by the “old man” Rob Baldwin, but my man of the match was the “little general” Phil Woodhead who marshalled his troops in attack and defence, and was instrumental in the last 5 minutes of pick and drive to see the game out for a win.