Wharfedale followed up their recent run of three hard-fought victories with a comprehensive bonus point demolition of a disjointed Huddersfield side who were outplayed in every aspect of the game. At long last, here was a performance for the home faithful to relish as the Green Machine defended aggressively, dominated the line-out and the loose play and attacked with pace and accuracy to score 6 tries, allowing Huddersfield only a late consolation score.

The match started ominously with Huddersfield playing down the slope with the wind at their backs and, from the kick-off, pinning Dale in their own 22. A succession of touch clearances by Tom Barrett left Dale defending a succession of line-outs – six in the first eight minutes of the game. But, whereas in the corresponding fixture at Lockwood Park, Huddersfield were allowed to barge through for four tries in the first quarter, this time, whatever Huddersfield tried, the Greens’ defence held firm. Two catch and drives were repulsed, George Hedgley stole one 5m line-out and aggressive tackling pushed Field wider and backwards. Eventually a ball carrier was isolated wide on the right and Richard Rhodes stretched over to win a penalty as the ball carrier failed to release. Barrett’s penalty took the ball to half-way and, from the line-out, after eleven phases of aggressive ball carrying with the ball swung out to both wings, a little shimmy from Barrett put Matty Houghton into space; with support from Harry Dunne and a slick offload to Charlie Graham, Dale were 7-0 up.

From the restart, Barrett cleared to touch – but Kieran Frost stole the line-out and Dale were on the attack again. A line-out on half way was driven forward to win a penalty; Barrett kicked to the corner; Rhodes won the line-out in the middle and the forwards drove over the line with Frost claiming the try. A second Barrett conversion and Dale were 14-0 up. On 24 minutes, Field were awarded a penalty for offside on the Dale 10m line but, rather than kick for the corner, Harry Davey opted to kick for goal. A psychological victory for the Dale line-out trio of Frost, Rhodes and Hedgley which was confirmed when Davey pulled the kick wide. A few minutes later and, after relieving some strong Dale pressure, another penalty to Field close on half way but – again, rather than go for a line-out, Davey aimed for the posts and missed. When Field did next kick to the corner, Rhodes forced a lineout knock-on and Field were penalised at the scrum, allowing Dale to escape to half-time with their 14-0 lead intact. In all, Dale stole or disrupted five line-outs in the first half, nullifying one of Huddersfield’s main attacking options.

The first score of the second half would be crucial – and what a score it was! Barrett kicked off deep, Huddersfield cleared and, after a few strong drives by the forwards, Barrett spun the ball out to Robbie Davidson on half way, who switched on the afterburners and scorched straight through midfield to score under the posts. Huddersfield then managed to put some phases together to threaten the Dale line but a great bit of counter-rucking by Matty Houghton enabled Dale to hack the ball downfield where Barrett scored a penalty to extend the lead to 24-0. Dale then began to turn the screw with increasing forward dominance. A succession of close range scrums and line-outs resulted in Phil Woodhead sniping over for the bonus point try, converted by Barrett; as Field got back into the Dale half, the Ulster tones of interim coach Steve Graham could be heard across the park, exhorting his troops to “Let’s go get ‘em!”. The green wall pushed Field back behind the gain line with only a couple of powerful runs and little chips from centre Sam Allan looking likely to cause any trouble. Although the pressure forced Dale to concede a couple of penalties, Field had no confidence in either their line-out or their kicker so were reduced to tap and go with no success. Maybe a better side would have punished this indiscipline. When Rhodes sneaked a turnover, scooping back a loose ball in the Dale 22, Woodhead broke down the blindside and, with one defender to beat, slipped a delightful pass to the supporting Charlie Graham who ran in unopposed from half way and an easy conversion for Barrett. A catch and drive lineout try for Dan Stockdale and a consolation try for Huddersfield’s no 8 Richard Piper, neither of which was converted, completed the scoring. 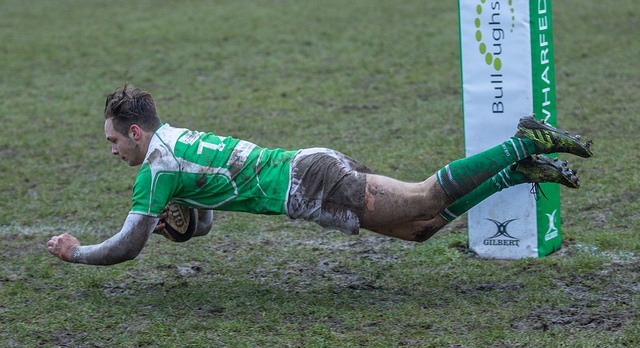 All in all, this was a performance that has been a long time coming. The Dale pack were outstanding, every man carrying hard and tackling ferociously. Rhodes, Frost and Hedgley bossed the lineout and Tyson was a constant presence in attack and defence, with great support from Houghton and replacement Steve Graham. Behind the scrum, Woodhead and Barrett controlled the game with intelligent decision making and, crucially, excellent execution; Robbie Davidson and Charlie Graham looked threatening every time they had the ball in hand; TD and Harry Dunne were solid in midfield and Joel Gill worked tirelessly out on the wing. Huddersfield were a team of limited ambition and we know that far tougher tests lie ahead in the battle to stay in this league, with the top five teams all still to visit the Avenue. However, on this form, if the team can maintain the same level of intensity in defence and accuracy with ball in hand, we will fear no-one.