With the Wharfedale pack dominating the game, even though George Hedgley was red carded in the first 10 minutes, there was room for the backs to use the ball.

The day started badly for Luctonians when James Scott was yellow carded after 4 seconds. Surely a record! Luctonians had kicked off and George Hedgley caught the ball on his knees. Scott`s challenge was reckless and the yellow card produced.

Dale made good use of the one man advantage until a clearance kick was taken by Tom Barrett. A good chase by Lucs saw Barrett isolated and a penalty awarded. The visitors were soon in Dale’s 22 with an attacking line out. The threat seemed to have passed with a turn over and a chance to clear until the Hedgley red card.

The visitors scored from the penalty awarded from Hedgley’s indiscretion. A good catch and drive at the ensuing line out saw them drive over with Sebastian Robinson-Hall getting the score. Sam Boxhall missed the conversion but added a penalty to take the score to 0 – 8.

Before the penalty kick Dale showed great determination in defending the line and the seven man scrum did not give an inch. Tackles were being made and territory protected.

The game changer came after 25 minutes with a Dale scrum on half way. Joel Gill added his weight to the pack and the Greens won a penalty. Barrett pushed the visitors deep into their own 22 and the pressure mounted. A penalty soon followed 5 metres from Luc’s line and Dale opted for the scrum. A succession of scrum penalties followed, with a yellow card to Piers Morrell in between for a high tackle on Phil Woodhead. James Tyson then scored for Dale and Tom Barrett added the conversion. With five minutes to go Dale had magnificently closed the gap to a point and had another five minutes of 14 against 14 to go.

The Green Machine attacked again and took the lead just before half time with Robbie Davidson finishing off a good handling move for a converted try.

Lucs did get close to scoring on the stroke of half time but Dale did enough to push winger Joshua Watkins out wide and the touchline came to their rescue. Half time Dale 14 Lucs 8

Dale started the second half a little nervously. A knock on from the kick off gave Dale a good platform. They then had possession three times but ended up defending a line out in their own 22.

Luctonians scored after a cheeky break from their scrum half, Sam Boxhall, who nearly made the line himself. Louis Silver was on hand to grab the score and a conversion from Boxhall took them back into the lead.

Despite a poor restart and a handling error Wharfedale started to camp in Luctonians half. A clearance kick was run back by Robbie Davidson who linked with Charlie Graham. Ample cover led to a foot in touch which saved Lucs. The line out was not straight and Dale went for the scrum. With the Green front row now dominant, the Luctonian scrum was demolished. Barrett went wide from the kick at goal but Dale attacked from the 22 drop out. In the attack we saw the first glimpse of the strength of new boy, Rhys Lovegrove. His example was followed by other team members who all made yards. The move only broke down when a flamboyant flick by Richard Rhodes went into touch. 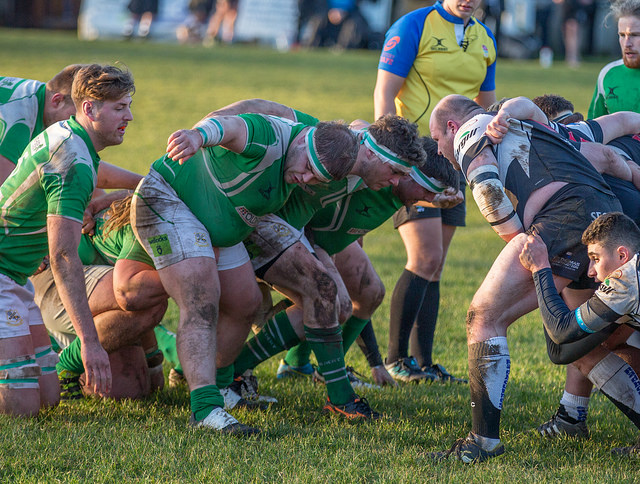 The Pack in Action

Lovegrove set up good ruck ball on half way. Barrett then timed a pass to Kieran Frost. Frost broke free and set up Oliver Cicognini for a converted try. Lucs did have their hands on the ball for a while but could not get out of their own half and Dale eventually forced a turn over. Acting scrum half Joe Altham passed to Barrett who sent the ball on to Phil Woodhead. Woody offloaded to Kieran Frost who handed the ball to Charlie Graham on the Luc`s 22. Graham showed his skill in beating two players and scoring a try which secured a bonus point for Dale. Barrett again added the extras and added two drop goals in the last 10 minutes to put the win beyond doubt. The first drop goal followed another period of pressure on the visitor`s line.

Rhys Ward got the nod for the Star Man accolade in the rugby paper but this was also on behalf of the whole pack. The front row was awesome throughout and when there were changes in personnel there was no lack of forward momentum. Kieran Frost was again outstanding and Richard Rhodes back to his best. Adam Howard was another player who shone as did James Tyson, who tackled and fought at the break down all afternoon.

Charlie Graham had, perhaps, his best game in a green shirt. All the backs contributed to defence and attack.

The match photographs are available under the Photos tab – follow the link to the Flikr Album.