A defensive battle was just edged by the home side by two points. The wind made kicking a lottery; into the wind was not an option and it was difficult to control the elements when each side had the wind at their backs.

Wharfedale worked hard in the opening 5 minutes and went through over 20 phases getting out of their half. The play ended when Tom Davidson was accused of blocking/crossing and holding the man back even though the “held player” put in his tackle. Chester spurned the three points on offer and went for the corner. They set up their first try from the ensuing 5 metre line out. A clinical catch and drive was rewarded with an unconverted try by Alick Croft.

Wharfedale responded very quickly. They reclaimed the restart and went through seven good handling moves before a mix up in mid field saw them lose possession. Richard Rhodes was on hand to strip the ball in midfield and set Dale back on the front foot. The attack seemed to have floundered with a loose pass which Charlie Graham tidied up just short of the Chester 10 metre line. Graham set off on a brilliant run breaking tackles and using his speed to reach the line. As he picked the ball up there were three Chester players in attendance; he left them standing and with grace and determination eluded more tackles. Tom Barrett landed the conversion to put Dale in front. 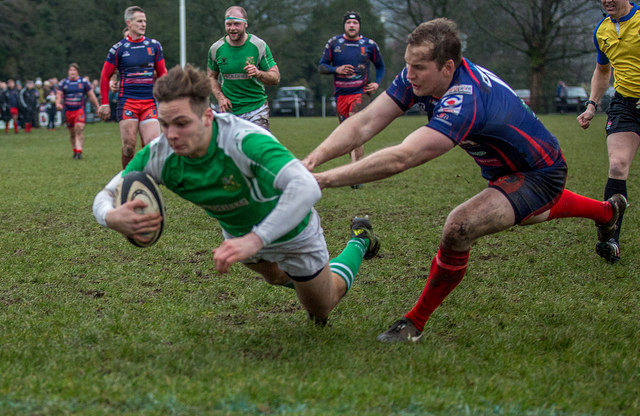 Charlie Graham in the act of scoring

Dale took the restart and worked their way deep into Chester territory. Only a handling error halted their progress. Dale still created more chances and Josh Burridge came close with a strong run straight down the middle. The attack ended with Wharfedale having a line out 5 metres from Chester’s line. An odd line out was won by Chester and the danger was over. Dale then were guilty of making mistakes which allowed Chester to get out of their half. Silly penalties were then given away and allowed Chester to build phases in Dale’s 22.

Dale survived, and using the ball well, worked the phases and gained ground to have an attacking line out on Chester’s 22. The line out misfired and another lazy penalty was conceded and Chester punished Dale with a towering kick up to within 7 metres of Dale’s line.

Chester then crossed with another catch and drive with Croft again the scorer. James Preston was successful from the tee.

Again Dale responded well and a combination of forwards and backs, sensible passing, strong support and quick recycling, led to another Graham try. Barrett came close with the extras but found the wind too strong to leave the match level at 12 all at half time.

After half time Dale were again guilty of squandering territory. After taking the lead, with Barrett’s superb 37 metre penalty near the right touch line, they defended well. James Tyson forced a penalty decision outside his own 22 and gave Dale the chance to go deep. The penalty kick went harmlessly over the dead ball line to give Chester the put in at the scrum. Worse was to come when a full penalty was awarded before the ball was put in and Chester went for the corner. Chester won the scrappy line out and put 14 phases together but could not get into Dale`s 22. A penalty was eventually awarded for not rolling away and Chester took the three points.

Chester again put in 15 phases before conceding a penalty when Richard Rhodes forced the decision. The touch kick took play up to half way and a successful line out was followed by a good drive. An inside pass to Charlie Graham gave him the room to run into Chester’s 22. Tyson was on hand to secure the ruck and further progress was made by Joe Altham. The ball was spread left and Robbie Davidson was close to scoring. Again the ruck was secured and Kieran Frost then crossed for Wharfedale. Barrett’s touchline conversion gave the home side an important seven point cushion with 20 minutes left.

Chester now had one ambition. They worked the ball through as many phases as possible to gain valuable territory. They could not and did not kick into the wind. Dale also had chances but when they did get into Chester’s 22 another poor decision by a Wharfedale player gave Chester a penalty.

Back came Chester and after seventeen phases they found space for Craig Ross to beat the defence and score wide to the right. Preston could not land the conversion and Dale clung on for a vital win.

This was a magnificent defensive effort from the Green Machine. Despite being handed the ball at the restart, after Ross’s try, when Barrett sent the ball dead, Chester could not get out of their own half. The Green line held and despite Chester’s best effort’s not an inch of precious territory was surrendered. The fortress was held with every green shirt putting in tackle after tackle and putting bodies on the line for the cause. The turning point seemed to come when Dale won a penalty on Chester’s scrum near half way. A poor line out let Chester off the hook, but good Dale pressure forced a mistake and an attacking scrum on Chester’s 22. Mr. Harris awarded a free kick to Chester and they crept up to half way. Penalties went to either side and Dale soon pushed Chester back into their 22. A successful line out was put into touch by Phil Woodhead for the win that saw Dale climb another two places in the league. They now are out of the relegation zone and face a vital match next week away to Blaydon.

Both teams played better into the wind as kicking was not an option. It was a bruising encounter with all players from both sides taking credit for the effort put in.

Charlie Graham won the Star Man award in the Rugby Paper. Again, it was a difficult decision as this was another big team effort. There were some star moments – Tyson and Rhodes forcing turnovers, Charlie Graham’s tap tackle, Tom Davidson’s tackle and stripping the ball in one move, Burridge and Altham’s runs into the opposition 22, Tom Barrett’s place kicking in very difficult conditions (his 70% against Chester’s 50% meant the two point advantage) and of course Charlie Graham’s first try.