Blaydon controlled the ball in the first half and, with excellent kicking from stand off Joel Matavesi, they created chances to keep the score board ticking over. Matavesi’s kicking sent Dale back on more than one occasion. It was an effective display of controlling field position.

As a contest the game was perhaps over at half time with Blaydon having accumulated 24 points with Wharfedale not troubling the scoreboard.

Matavesi opened his afternoon with a superbly weighted prod deep into the corner and forced Wharfedale to kick the ball out for an attacking Blaydon line out. A poor line out led to a Dale scrum which drove Blaydon back and won a penalty. Dale ran the ball but knocked on and came back for the scrum penalty. A few phases later Blaydon got away with a dropped ball, judged to be backwards, and then Dale gave away a penalty on half way.

Matavesi sent the ball into Dale’s 22 and this time the Blaydon line out worked.

Blaydon’s first try was at the end of good direct running and support play and ended with Harry Borthwick crashing over. No conversion but Matavesi landed a penalty 7 minutes later.

Wharfedale then tried to mount attacks but mistakes saw them lose possession and Matavesi sent them back deep into their own half. The sequence ended with a Wharfedale knock on on half way.

Another 10 minutes went by before Borthwick pounced on a loose ball after he had stripped a Wharfedale player, and ran under the posts. Matavesi slotted the extras. Dale added to their own problems by sending the restart straight into touch.

Wharfedale did put pressure on Blaydon but failed to score. Barrett had a chance to land a fairly easy penalty but was just wide.

The last five minutes of the first half saw Matavesi add two more penalties and he finished the show with a drop goal from 37 metres. The first was after a careless obstruction. From the restart Blaydon fed Matavesi who sent a searing kick from deep in his own 22 to just outside Dale’s 22. The second penalty was just as wanton when Adam Howard was allowed to become isolated. The restart was a carbon copy with Matavesi gaining another 70 metres with a simple kick. Field position for the drop goal resulted from another Matavesi kick to touch from a penalty. Not only was the penalty too easily given away but some back chat saw Dale marched back another 10 metres.

A resurgent Dale came back in the second half with Barrett wriggling through for a try after the Greens had worked 20 phases. Barrett converted. 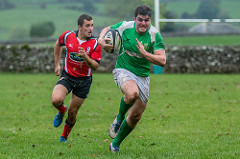 Joe Altham on the move

They could have scored again sooner, but the next sequence seemed to sum up Dale’s predicament at the moment. First a try was scored by Toms Asejevs but not awarded. Blaydon’s No 13 was given a yellow card for cynical defence on the line, but no penalty try! A succession of penalties eventually led to a push over try with George Hedgley getting the touch down. Barrett converted. From the non-awarded try and yellow card six and half minutes were taken up with a succession of resets and penalties. Plenty of warnings from Mr Callum Sharp but no action. As at Chester last week Blaydon had successfully been allowed to run down the clock. But with sixteen minutes to go there was now belief that Dale could turn this match round.

Another Matavesi penalty gave Blaydon a 13 point lead. Oli Cicognini grabbed a try at the end of the game after another 25 phases but Barrett missed the conversion so Dale missed out on a bonus point. The passage of play started with a Wharfedale scrum in their own 22 and good old-fashioned rugby, utilizing every member of the team, led to the try.

The second half showed what Wharfedale are capable of and they outplayed Blaydon, dominated possession and territory.

Many Wharfedale supporters were scratching their heads at half time and could not really understand why the score had reached 0-24. Simples, Blaydon did not play very well but took the chances on offer and despite Dale’s change of tactics in the second half the visitors had done enough to win.

If you had turned up at half time and only watched the second half, then, as at Chester, you would not understand why Dale had slipped to another defeat.