Two penalty kicks from Tom Barrett gave Wharfedale the victory in this battle of the basement. It was enough for Dale to swap places with Sheffield who now are at the bottom of the league.

Wharfedale hooker, Dan Stockdale, was instrumental in the match going ahead, as he brought his chain harrow and spent two hours in the morning breaking up the frozen snow. A host of volunteers then cleared the lines and got the blue paint down.

Both sides attempted to play good rugby on a difficult surface and the officials played their part in a fast moving game of rugby.

The home side had the edge at the set piece and this allowed them to get better field position than the visitors.

Wharfedale set up the first strong attack of the match spreading the ball wide to the left and the backs making good ground. A penalty was sent deep into the visitor`s 22 but a messy line out saw the attack founder. The next wave soon followed but another mistake, after a blistering run from Oli Cicognini, gave the visitors a scrum in their own 22. With their scrum under pressure they still managed to clear their lines and another mistake by Dale, after winning the line out, gave Sheffield a scrum in comparative safety. Then the Green Machine turned on the power. Although Sheffield had taken the ball they were then driven off it, and Dale also got a penalty.

A successful catch and drive saw another penalty award, but Dale could not cross the line and eventually Sheffield got relief with a penalty and a line out on their own 10 metre line. Richard Rhodes leapt and stole the ball and the Greens pressed forward again. Rhys Lovegrove swept the ball into the 22 and a knock on by the defence gave Dale another attacking platform. A mix up in the front row gave a free kick to Sheffield and another chance to break free of the shackles.

It was a credit to Sheffield that it took Wharfedale 24 minutes to score. It took a brilliant move to break the deadlock as well. A Sheffield clearance was taken by Tom Barrett. His high ball was retaken by Tom Mann and recycled ball fed to Robbie Davidson. Kieran Frost then rampaged into the Sheffield 22 before handing the scoring pass to Josh Burridge. Barrett was just wide with the conversion.

Sheffield did, with the help of more mistakes from Dale, spend some time in Wharfedale’s half and Stephen Depledge got a penalty before half time to get them on the scoreboard.

Back came Dale and put more pressure on Sheffield, but a sloppy inside pass was forward and another attack came to nought. The scrum was again destroyed by the Green Machine but the AR decided that Rhys Ward was “angling in “ and the visitors ended the half very quickly.

Dale started the second half on the attack but a great charge by Toms Asejevs was ended when his off load was claimed by a Sheffield player.

Sheffield had the lead after 55 minutes with a converted Sam Graham try after the visitors had battered the Dale line. Two rare missed tackles allowed Sheffield to get into Dale’s 22 and then a lengthy pick and go eventually worked for Graham.

Another chance went begging for Dale when the ball was swept wide to the right and the speed of the move seemed to have exposed Sheffield’s defence, but Robbie Davidson just caught the touch line. Dale stole the ball but the attack faltered with a penalty awarded to Sheffield for not releasing after the tackle. The Dale pack walked away smiling at this decision and the defenders looked rather sheepish. Credit to Dale though – no comment was made. It did not matter as the non-functioning Sheffield line out led to a Dale scrum and then a scrum penalty. Barrett put the ball accurately into the corner. A catch and drive led to a Dan Stockdale unconverted try to level the scores before Barrett’s two penalties gave Dale the win. 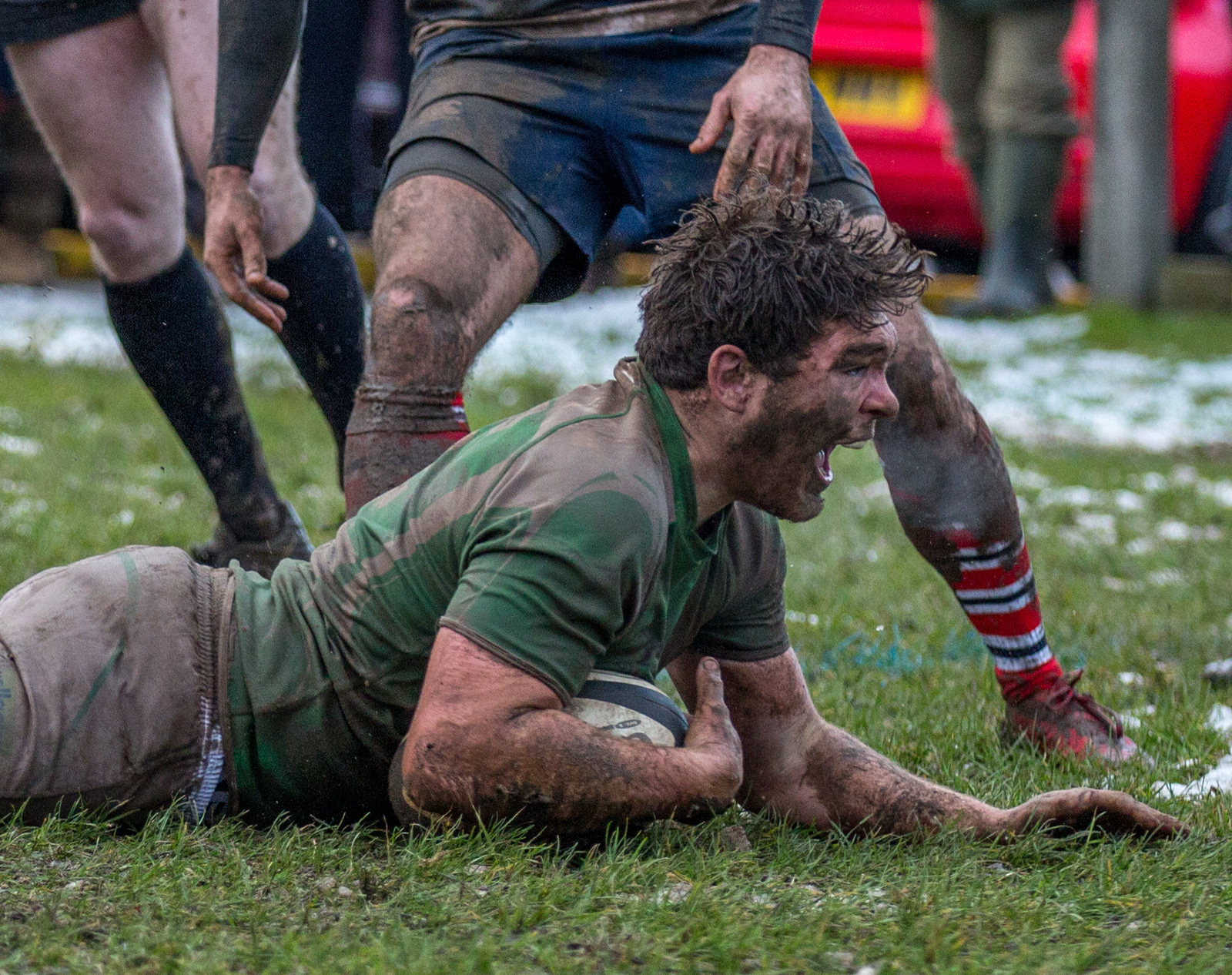 One of the penalties was when Dale were reduced to 14 men aftern Adam Howard saw yellow for a no arms/late tackle. Sheffield went for the corner but another gazelle like leap from Rhodes claimed the ball and he was also taken out in the air – but no more than a penalty was awarded even though this was more dangerous than the Howard incident a minute earlier. A great drive from the ensuing line out saw the Green Machine on fire again going 25 metres and forcing another penalty.

Sheffield struggled to cope with the courageous 14 and Howard returned for an attacking Dale line out. This was after Dale were driving to the line and Sheffield clearly stopped progress illegally by coming in at the side and collapsing the maul – again only a penalty. Only a very short time before this the ref had warned the Sheffield skipper about the number of penalties his side were giving away.

With a six point lead and only minutes to go surely Dale would nurse the ball or put it deep into Sheffield’s 22. No, an ambitious chip by Tom Barrett from his own 22 was fielded by Sheffield and run back with interest. Only a desperate cover tackle from Robbie Davidson saved the day.

James Tyson picked up the Star Man in the Rugby Paper for his tireless work during the whole match. This was though, a team effort, with no one player really standing out. Many thought that Stockers should have got the award for his work posing on a tractor in the morning and then grabbing a try later in the game. Frost and Rhodes dominated the line out and the front row, even with a change of personnel, clearly won the battle up front.