Stourbridge gave a display of strong direct running, slick passing and good support to rack up another six try win away from home. The opening 20 minutes were a close encounter but then three tries from the visitors took the game away from Dale.

Stourbridge opened the scoring with a penalty from Chris Scott. Tom Barrett levelled the score three minutes later. Tom Barrett had a drop goal that was disappointingly well wide of the mark.

The next ten minutes saw both sides battling it out in midfield. A quick line out caught the home side napping and Stour took full advantage with some fine play to score wide to the right. Star Man, George Morgan, touched down and Scott converted. There was some muttering about the quick line out; the following shows that Stourbridge acted perfectly legally…..

Joseph Heatley was on the end of a fine sweeping move from Stourbridge for the second. Again Scott was accurate from the tee. Both tries were set up by full back Afeafe Haisila who split the defence wide open.

Stefan Thorp scored the third after another run from full back Afeafe Haisila. With Scott’s extra two points the visitors had opened up a 21 point lead. At least this time the run was halted and Stour had to put some phases together before prop, Stefan Thorpe, barreled over.

After the opening quarter one of the visitor’s supporters remarked on how good a contest this was. Fifteen minutes later the game was almost out of sight. Afeafe Haisila showed his full potential that earned him a place in the Tonga U20s and a place at Worcester Warriors Academy. He was a joy to watch and a player to watch out for in the future.

Wharfedale fought back and came close to scoring after a Phil Woodhead break was followed up by Barrett and the forwards put pressure on the visitor’s line. Stour for once could not cope with the pressure and penalties followed. Haisala was yellow carded for a cynical offside which denied a try scoring opportunity. Dale went for the corner and spun the ball left from a good line out. Despite a poor pass Oli Ciocognini had the power and presence to squeeze in at the corner. Barrett converted. 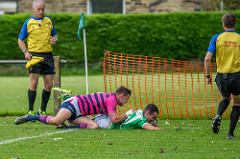 Dale, with the crowd urging them on, were getting back into the game and strong running and accurate passing saw them return the restart up to half way; then a knock on. Jo Heatley stifled any hopes of a comeback with a converted solo effort from half way. The scrum half picked the ball up from the back of the scrum and was given space and time to run to the line unscathed.

Dale opened the second half with a successful line out outside Stour’s 22. Again the move broke down. It was Dale that had the better chances to score in the opening 20 minutes and on another day a different official would have seen two crucial moves differently. Firstly, after good running from Barrett and Josh Prell, Josh Burridge got close with a player stopping any play of the ball. Dr. Cook stated that Burridge had crossed the line without grounding and had been dragged backwards! On another day, this would have been a penalty try and maybe a flash of yellow. The second was when George Hedgley was half tackled but seemingly not held. He went on to touch down but Dr. Cook decided that he had been tackled and was guilty of holding on!

The obvious happened and Stour made their way downfield and when George Morgan parted the defence like Moses at the Red Sea, he crossed the whitewash for Stourbridge’s 5th try. Full back Afeafe Haisila claimed the extras. Jack Lea barged over for the sixth try which went unconverted.

The visitors were clearly the better side but Dale, at times, made it too easy for them. There was a lack of consistency both in attack and in defence. The ball was spilled too often and Dale were guilty of leaving gaps that a battalion of tanks could get through.

Wharfedale face two away games at Sheffield and Chester. Two matches that this team, if they cut out the mistakes, are capable of winning.

The match photographs are available under the Photos tab – follow the Link to Flikr Album.