Poor tackling from Wharfedale in the opening 10 minutes allowed Leicester Lions to build a 19 point lead. Having won the toss, Lions played with the wind in their favour for the first half, and after establishing a lead made it difficult for Dale to get back into the game. Leicester were strong in defence, and, especially in the second half, controlled the ball well. Both sides attempted to play some good open rugby which made light of the difficult conditions.

Wharfedale won a Lion’s attacking line out and started working phases to exit their 22 but they quickly lost the ball. Quick recycled ball was given to Lions hooker, Oliver Taylor, who ran at the defence. He offloaded to Patrick Ryan who ran in for a try which Jonathan Boden converted.

Wharfedale regathered the restart and some good work took them to the visitor’s 22. The ball was then knocked out of Joe Altham’s grasp and Lions, with some very flat passes, fed Devon Constant who ran in a try from his own 10 metre line. Boden again slotted the conversion. Constant showed his strength and ability as he had to get past three tackles to score. This is the rugby that showed the best of a good player and was applauded by the home crowd.

A moment of hope came in the seventh minute when the Leicester scrum was demolished on half way and were Dale awarded a penalty. A superb catch and drive was only halted by the referee who penalized Wharfedale for obstruction claiming that Tom Whyte, at the back of the rolling maul, was changing lanes and detached??

The third try came from a Boden break down the right and Henry Clement was on hand to finish the move off. There were no extras but a firm lead had been established after 10 minutes!

Another Constant run threatened to split Wharfedale apart, but Chris Swainson put in a superb tackle to save the situation. Constant then showed another side of his game when he dived at Phil Woodhead. Referee, Gareth Holsgrove, made light of the dangerous tackle, which clearly injured Woodhead and awarded a penalty for a no arms tackle. He had a moderate talk to Constant about a duty of care to the opposition. Mr. Holsgrove should have also thought about his responsibilities in this area. Congratulations to the Wharfedale team for not badgering the officials.

Wharfedale then started to muscle their way into the game, albeit spending a long period in their own half moving the ball up to near half way. This was not a day for kicking out of defence and players lined up in a 27 phase drive.

Dale then spent a good time in the opposition half, building in belief and confidence. Only good use of the wind by Lions took play back into Dale’s half. Again, Dale ran the ball out and worked their way into Lions 22.

What happened next beggared belief. An innocuous no arms tackle by Ralph Wellock on Constant Devon caused mayhem with massive protests from the Leicester players. Wellock was given a yellow card!

Wharfedale got on the scoreboard in the second half with a Tom Barrett penalty.

Lions then grabbed a bonus point try from a line out on half way which Dale seemed to have stolen. Alex Smit touched down wide to the left, but Boden struggled with the conversion into the wind.

Jamie Guy grabbed a try for Wharfedale, with a minute to go, which Barrett converted. 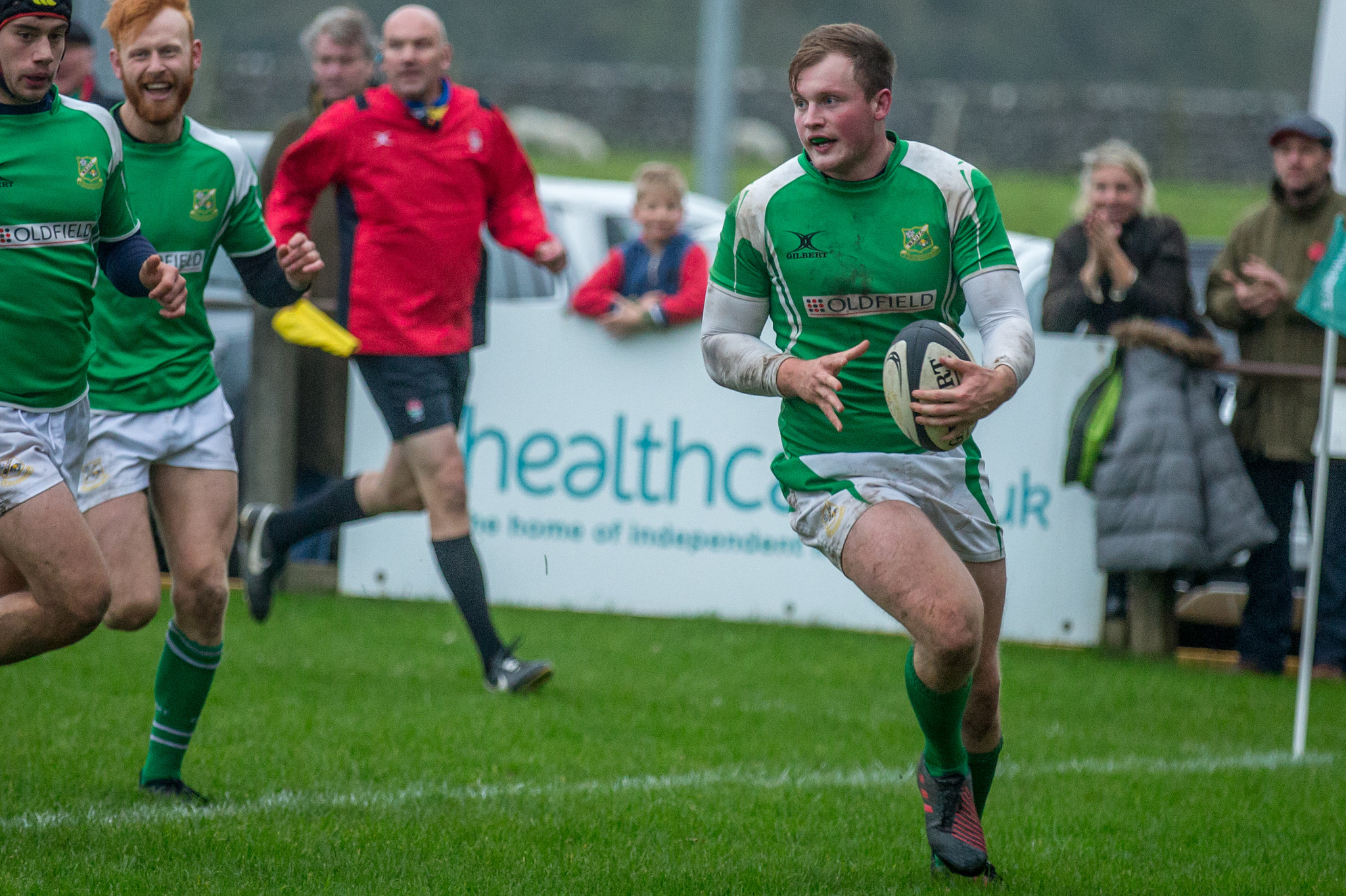 Jamie Guy on his way to his try

Lions ended up with only 13 men on the field for most of the last 10 minutes. First, Alex Knight went for pulling down an attacking maul. Devon Constant was sin binned for a spot of foul play. This was on the recommendation of the Assistant Referee who said that Constant had led with his forearm. Constant was immature in his actions when leaving the field. Such a pity that a fine player does not just let his skills speak for him.

If we forget the four lapses of concentration, the four phases of Lions play when Dale lapsed back into “no tackle mode” then this was another good display from the greens.

The pack are becoming an awesome spectacle and worthy of the Green Machine title. George Hedgley again put in a tremendous shift with all the pack contributing to strong tackles and ball carrying. Chris Swainson stepped up to the first team for the first time this season and contributed in every department. The front row was, again, outstanding, and, even into the wind and uphill in the first half, dominated the set piece. The line out, given the gusty wind, worked very well.

The hard work done by the forwards needs to be built on and it must be disheartening for them to keep seeing tries being scored as a result of weak tackling. In the second half Ben Parkinson showed that he could tackle as he put in some strong hits. Given the chance he is also a strong runner with the ball, running straight and powerfully at the defence.<./p>