The battle of the two Dales took place on a warm afternoon under a bright sky. The rugby matched the weather with both sides contributing to a fast, open game.

Wharfedale now face next week’s match against Macclesfield with their destiny in their own hands. As usual Wharfedale left the victory until the last minute and the large group of travelling faithful suffered the agony of watching attack after attack before Phil Woodhead dived over for the bonus point, match winning try.

The match did not start very well for Dale and they could not get their hands on the ball in the first 15 minutes. Two mistakes did not help, they lost a line out and when given a chance to clear their line with a penalty, touch was not found and Tynedale maintained their attacks. Worse was to follow after conceding three penalties, only two in the red zone, Wharfedale were warned about the penalty count. The next penalty soon followed and Phil Woodhead was yellow carded.

From the ensuing 5 metre line out, 1st phase ball was used and Ashley Smith carved through the defence to score. Jake Rodgers converted. Dale did not touch the ball after the restart and Tynedale built through 8 phases before scrum half David Cook grabbed their second try. The conversion, by Cook, bounced of the cross bar and over to give Tynedale a 14 – 0 lead after 15 minutes. This seemed to sum up Dale’s day and did not auger well.

With skipper Woodhead still in the bin it was now Wharfedale that started to play and get their hands on the ball. The restart was knocked on by Tynedale and Dale won a scrum penalty which Barrett nudged into the opposition’s 22. The line out worked and the ball moved left to Rhys Lovegrove. A show and go opened up the Tynedale defence and he touched down under the posts. Barrett converted. 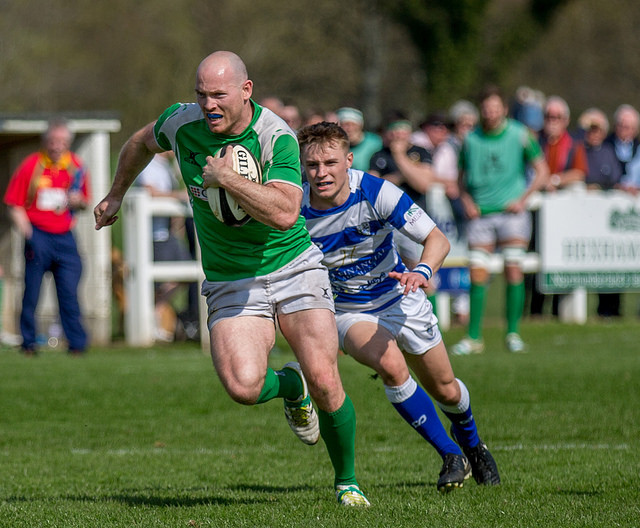 Tynedale now could not get their hands on the ball and it was Wharfedale’s turn to go through 8 phases after the restart before finding space for Matty Houghton to score wide to the left. Barrett just missed with the extras but Dale were back in the game. Houghton, appearing as a left winger, showed good speed and strength to take the ball and squeeze over.

Tynedale extended their lead with a penalty from Rodgers to go in at half time 17 – 12.

Good work from the 2nd half kick-off was ruined when Ashley Smith intercepted a long, floaty Barrett pass on half way to open the second half scoring for Tynedale, but Rodgers could not convert. Dale now found themselves trailing by 10 points.

Wharfedale then stepped up the gears and attacked relentlessly but the northeastern side held the line. Tynedale were only allowed a brief period in Dale’s territory but their defence was amazing. The Tynedale reporter stated that the home side turned in a lackluster performance – if this had been so then Dale would have scored many more tries. They defended the line as though they were desperate to hang on to the lead. They repulsed endless determined charges at their line with fearless tackling.

Wave after wave of attacks seemed to come to nothing. A Rob Baldwin effort was penalized as a double movement but the pressure on Blaydon’s line was fierce. Bodies from both sides were put on the line and it took a poor ball which popped out the back from a Wharfedale scrum to catch Tynedale out. Woodhead scooped the ball up and darted through a tiny gap to score.

The last minutes were frenetic. Tynedale looked to have scored after an incident on half way but the try was disallowed and Dale had a scrum back on the half way line.

The last 10 minutes were all Wharfedale. Oliver Cicognini fielded a long clearance by the home side and made good ground. This was followed by 21 phases of bruising assault on Tynedale’s line. The Corbridge side had the relief of a penalty and the faithful thought that was the end but oh no. The penalty kick was brilliantly kept in play and some magic from Woodhead meant that the pressure was back on and 9 phases were put together before the visitors were bundled into touch. Again, the travelling support thought the game was up but oh no, no. Wharfedale won the line out and then battered the line again. It was skipper Woodhead who got the vital try slipping through the eye of a needle to grab the try that sent hundreds of the Green Machine’s supporters in to wild celebrations. 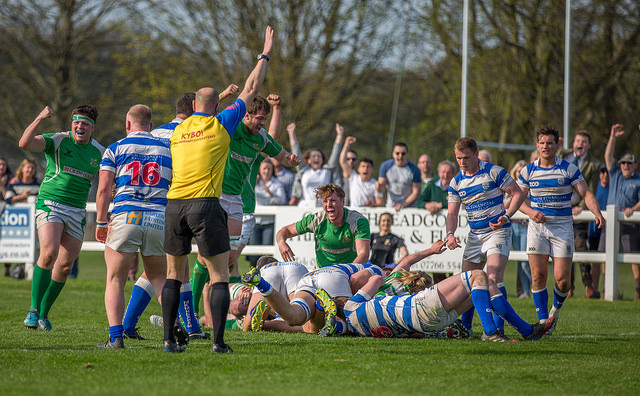 Barrett missed the conversion but it did not matter. Wharfedale had the vital win, and with the magic bonus point. With Blaydon losing elsewhere the matter is now simple.

Phil Woodhead got the nod for Star Man in the Rugby Paper for the second week running but all who watched the match would want to congratulate the whole team for this performance. Woody’s performance was outstanding and he was a constant threat to Tynedale. He was back to his superlative best. The break near the end down the touchline was perfection. No other player would have taken his route, so close to the touchline, but he was at his slippery best, and left Tynedale players watching in bewilderment.

The pack was again awesome and the scrum penalty count grew. They also made it hard for Tynedale to use their own ball. The line out also worked well and took 4 from the opposition. The front row drove forwards and all took turns in carrying the ball and tackling. Frost and Hedgley were ever present around the park, Hedgley put in a massive shift and was a close contender for Man of the Match. Baldwin led the back row by example and his work was matched by Tyson and Houghton. It was noticeable that there was no loss of performance when players came off the bench. Altham, Rhodes and Burridge made massive contributions and were all on the pitch to contribute to the final push.

Woody and Barrett ran at the defence and created space around them. The centre partnership of Tom Davidson and Rhys Lovegrove is one of the strengths of the team. The only time their defence was breached was when Woody was off the pitch and TD was filling in at scrum half. This is a combination that can only grow in strength. The back three, Robbie Davidson, Cico and Gill, were safe and sound. They fielded and tackled everything that Tynedale threw at them and ran the ball back with interest.

This win, however momentous, however euphoric, means that the job is half done. Next week the lads have got to recover from such a bruising encounter and produce again. The same goes for the support. The emotions were put through the ringer but what a finish. Grown men and women were hugging and some could not hold back the tears. We need the full compliment at the Avenue next week – if we can take about 200-300 up to Tynedale let us make it 1,000 for the last home game of the season and most notably, Michael “Clarty” Harrison’s last game as our beloved, most respected Director of Rugby.