Wharfedale made a strong start to this match against Stourbridge and went in at half time with a justified lead. The gap could have been greater but they turned round at oranges three points to the good and the wind behind them in the second half.

Dale scored first, after 2 minutes, when Stourbridge were forced to kick downfield after the kick off. The ball was worked through 8 phases before a strong break by Rhys Lovegrove was followed up by Tom Barrett who fed Tom Mann for the try. 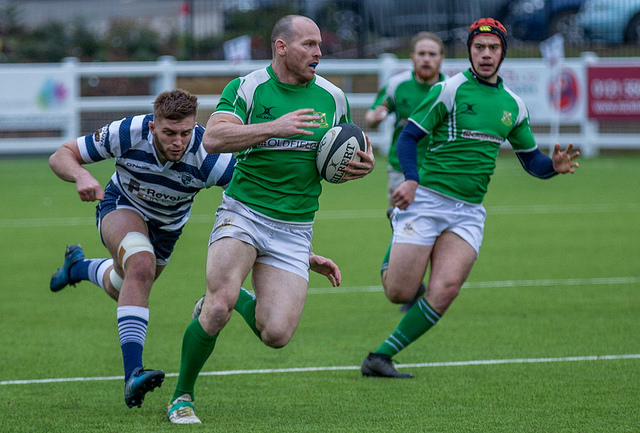 Wharfedale carried on attacking and had more chances to score that were squandered close to the line. During this period Dale were good in attack and strong in defence. The best period came when Stourbridge had a scrum on the visitor’s 22. Five phases later Stour had lost thirty metres and gave away a penalty. Barrett sent the ball up to the 22 and more pressure ended with a penalty in front of the posts which Barrett nailed.

Dale again showed their quality winning a penalty on a Stourbridge scrum, and with the forwards creating mayhem, the backs had the confidence to run with the ball. Good moves from Robbie Davidson and Tom Mann took the attack up to Stour’s 22, and a penalty which Barrett sent to the 5 metre line. The line out was won but Stour were allowed to kill the ball and got the put in at the scrum.

This signaled a touch of panic in the Stourbridge camp and 2 new front row players (including their man of the match from last week) were brought on. The scrums were now a more even contest and Stour worked their way into Dale’s 22. Now it was Wharfedale under pressure. They had chances to clear but mistakes kept them in their own 22.

Stourbridge mounted repeated attacks on Dale and pressure eventually led to a try by Nicholas Murphy which Robert Forbes converted.

Dale ended the half on the attack and Barrett missed a penalty chance on the stroke of half time.

Stourbridge took the lead early in the second half, with Wharfedale reduced to 14 men, after a Rhys Lovegrove yellow card. Substitute, Nick David, scored but no conversion. Barrett restored the lead for Dale with a long distance (Stourbridge said 35 metres, twitter and your scribe gave it at 45 metres!) drop goal.

The Midlanders retook the lead when another substitute, Jack Lea, crashed over from short range. Forbes slotted the conversion to take the score to 19-13.

Dale attacked next from a line out on Stour’s 22. Four good phases had the defence creaking; this was the result of Tom Barrett attacking and breaking the line with Phil Woodhead in support, but the ball was knocked on 5 metres short. Stour worked their way up to Dale’s 10 metre line. The Greens won the line out and pressed forwards. Then disaster, after 8 phases a suicidal long pass was easily picked off by winger Joshua Trinham, on his own 10 metre line, who had an easy run in to the line. David was accurate from the tee.

The Greens did get back into the game with a superb finish from Oliver Cicognini for an unconverted try but David fished off the scoring with a late penalty.

Cicognini came close in the dying minutes but a foot in touch stopped him scoring.

This was a heartbreaking finish to a match in which Wharfedale had competed in all departments of the game. The scrums were dominated by Wharfedale until Stourbridge brought on 2 of their more experienced front row players. After that the contest was even.

It was a game that Dale could have won; they had enough possession and territory to have scored more points. The lads should hold their heads high after this performance and take the positive play on to the next match. There was no individual star as this was a team performance.

All the players had good games and they need to replicate this performance next week at the Avenue.

The match photographs are available under the Fixtures tab – follow the Link to Flikr Album.

All the lost scrums were penalty awards. The lost line outs included a number of slide rule Not Straight decisions – the ref was consistent throughout on this.