The visitors started brightly, good work from the forwards and backs saw them deeply entrenched in South Leicester’s half. Good carries from George Hedgley and Matty Houghton forced the home side to retreat and a sweeping move left saw Oliver Cicognini cross the whitewash for an unconverted try.

Dale went straight back on to the attack from the restart with a well placed kick from Tom Davidson. The kick was followed up and a turn over gave Dale the ball back and a penalty soon came. Tom Davidson kicked the penalty to give Dale a 0–8 lead.

Dale attacked again and soon had an attacking 5 metre line out. The line out was won but South did enough to disrupt the maul and a knock on ended the move.

More pressure from the away side on the home line led to nothing and then South Leicester woke up.

From a defensive 5 metre scrum they broke out of their 22 with a strong run from winger Myles Bean. Wesley Cope was on hand to take the ball into Dale’s 22 and then 1st phase ball was moved right to find full back Corey Venus in acres of space for a simple walk over try. Ricky Aley converted.

4 minutes later Dale were careless in possession and South’s Jo Collingham picked up the loose ball. He fed right winger, Matt Cooke who ran in from half way. Aley was again accurate from the tee.

Having spent 20 of the first 23 minutes on the attack, Dale were now trailing 14 points to 8.

Davidson knocked over a penalty to keep Dale close but the first half finished with another Dale disaster. South had a concerted attack which ended when James Tyson forced a penalty and Dale could move out of defence. But somehow the ball popped out of the maul on Dale’s 22 and there were three South players on hand and no sign of a Dale defence to allow Myles Bean an easy converted score under the posts to give the home side a 10-point lead at half time.

Aley opened the second half with a penalty after 8 minutes. Then it was all Wharfedale for the next 10 minutes. A sniping run from Phil Woodhead and a surge from Josh Prell took the ball close to the South try line. Then the forwards piled in and Toms Asejevs crashed over for an unconverted try. 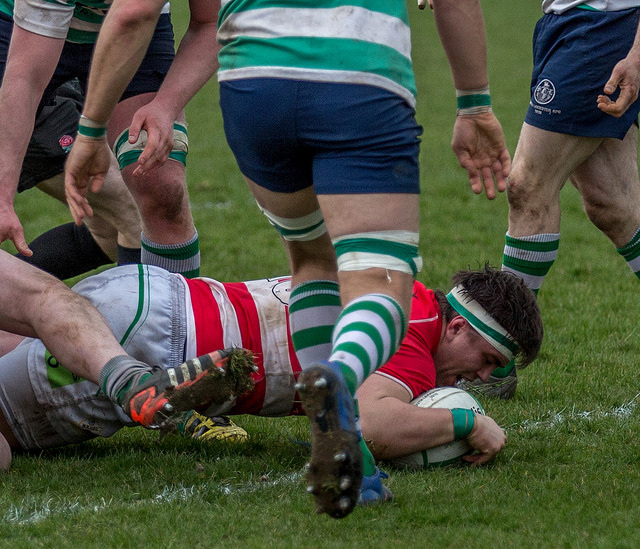 Aley added another three pointer before the game deteriorated a little with the assistant referees showing their muscle and stopping the game. The worst intervention was when Dale seemed to have scored a super try down the right wing. Oh no, a forward pass was given on the South 22!

2 yellow cards were issued during this period. One for South’s Adam Shaw and one for Dale’s Matty Houghton before a red card was shown to South’s Lee Miller.

The South Leicester pack took the honours on the day and won the battle in both tight and loose play. Wharfedale did well to secure all their own ball in the scrum but the line out was not working brilliantly. The South backs then did the pretty stuff and scored the three tries. Wharfedale looked good at times but failed to capitalise on strong field position when they should have scored.

Tom Davidson had a solid game at stand-off. His kicking out of hand was excellent and his distribution was good. James Tyson and Matty Houghton never gave up harrying the defence.