A brave, battling performance by Wharfedale saw them claim their first win of the season. On a wet day, which made handling difficult, Dale took their chances to score and keep the scoreboard ticking over.

Wharfedale opened the scoring when James Tyson forced a turnover and broke away. The pack followed up and, when the ball was moved right, Robbie Davidson ghosted through the defence to score. Tom Barrett was just wide with the conversion. 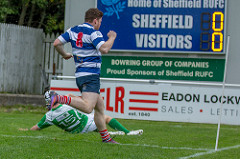 Two minutes later Barrett landed an excellent penalty from 48 metres and soon slotted another from 43 metres. He furthered extended the lead with a simpler shot from 24 metres to give Dale a 14 point lead after 20 minutes.

Good work from Sheffield was rewarded by a Stephen Depledge try but no conversion left the score at 5-14. The home side finished the first half putting pressure on Wharfedale’s line but the defence was solid.

In the second half both teams struggled with the conditions and it was Sheffield that broke the deadlock with perhaps the best move of the game when Rupert Broadley touched down wide out to the right. Again there were no extra points and before this two penalty chances were also sent wide of the posts. The gap was now only four points and Sheffield were striving for a win. With three minutes to go Barrett converted his fourth penalty to leave the final score at 10-17 and a rare away win for the Greens.

This was an outstanding performance from Wharfedale. The passion was back in the play and tackles were being made and no player was found lacking in spirit and endeavour. What a difference to last season when leads, away from home, were squandered in the dying minutes and Dale lost three matches by a point. This Green Machine was not for giving in and, cheered on by a strong group of the travelling faithful, they held on. Sheffield put together 21 phases in the last 5 minutes in Dale’s 22. Tackle after tackle went in and the line was kept intact. 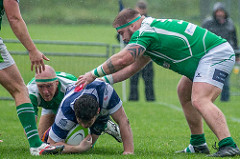 If the scrum was a bit of a lottery at times with both sides giving away penalties, Wharfedale just about had the edge and were on the front foot on many occasions. The line out was not at its best and Sheffield did get hands on the Dale ball too often.

The conditions were not conducive to fast open rugby but Dale managed to put phases together and cut down on mistakes. There were one or two errors but the team worked together to rectify the situation. One dangerous mistake was a floated pass that Sheffield intercepted and looked like running away to score but the cover turned up and the danger was over.

Dale welcomed back Joel Gill who teamed up with Tom Davidson in the centre. This gave Dale a solid platform in midfield and there was little space for Sheffield to exploit. The other returnee was James Tyson in the back row. Tyson never stopped harrying and, along with Tom Whyte and George Hedgley, generally snuffed out any threat that Sheffield could muster.

Tom Barrett, at stand off, had a good match. His kicking won the game for Wharfedale with four excellent penalties, including three from long range. The Sheffield place kickers had a miserable day and left 10 vital points on the tee.

Wharfedale are now off the bottom and need to build on this performance away at Chester this Saturday and then Blaydon at home the week after.