A disappointing performance by Wharfedale left them firmly rooted to the bottom of the table with a massive mountain to climb in 2018.

Otley showed more determination than Dale in the first half and a try just before half time gave them a 13-6 advantage that they deserved.

The visitors barely touched the ball before Otley scored their first try after 5 minutes. Strong play by the home side led to an Otley 5 metre scrum. The ball was picked up by scrum half, Joe Rowntree, who darted over the line. Rowntree could not add the conversion.

Tom Barrett kept Dale in touch with two penalties to one from Rowntree.

Wharfedale then started to open up the game and looked threatening but gave away a silly penalty on Otley’s 22. A quick tap from Rowntree took him up to halfway and his pass to Henry Roberts sent the winger clear to the line. Rowntree added the extras.

Otley scored their third try, after 55 minutes, when they were handed field position by a Wharfedale fumble on their own 22. Good offloading and support play ended with an unconverted try for Sam Cook. 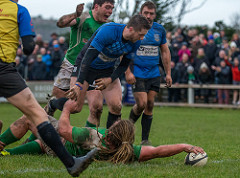 Wharfedale clung on to leave with a bonus point.

Please click on the link below for more details.
#WRUFC #OneTeam
https://www.wharfedalerufc.co.uk/new-club-chair-appointed/

In the end, a drawer was a fair result.

Good to see @Ioniansrufc back at the Avenue #yorkshire