Wharfedale showed true fighting spirit to claw their way back into the game after going in at half time trailing by 15 points. There would have been no complaints if they had gone on to win and they took the lead with 10 minutes to go only for Hinckley to produce a match winning try.

The opening half an hour was dominated by Wharfedale with Hinckley struggling to get out of their own half. Dale however could not turn this into points and it was Hinckley that scored the first two tries against the run of play.

The first try came when Dale won a line out just outside Hinckley’s 22. The ball was soon lost and Thomas Wheatcroft was allowed to run out of defence to half way. His pass found winger Sam Driver who sprinted to the line for an unconverted try. The second try was similar. Dale had possession but were pinged for accidental offside on the Hinckley 10 metre line. The hosts won the scrum and three phases later spread the ball wide to the left. A missed tackle allowed Sam Driver the room to again race to the line for his second unconverted try. Two missed tackles and two tries against the run of play!

Driver’s third try was more of a team effort. Hinckley gathered the restart and worked through 15 phases with good work from the Hinckley pack and backs. Eventually space was created for an overlap on the right and Driver finished off the move.

,p>More pressure from Dale resulted in a shot at goal from Tom Barrett. His 43 metre effort hit the post and left the visitors trailing 15-0 at half time.

Dale made a strong start to the second half and the Green Machine were starting to dominate. They had to endure a threat to their own line but a great leap by Kieran Frost stole a Hinckley 5 metre line out and the danger passed. From then on it was Wharfedale that looked like the promotion chasing side as they pressed forwards with forwards and backs having the confidence to go on the attack.

A penalty try was just reward after 55 minutes when Hinckley pulled down a rolling maul on their line. The pack were now driving forward and the scrum penalty count was mounting.

The visitor`s next try started with the backs running the ball from a defensive scrum and running the ball up to Hinckley’s 22. Adam Howard charged forward and then an exquisite nudge from Tom Mann, even though he was under pressure, ended with Hinckley being dumped over their own line for a Wharfedale 5 metre scrum.

A scrum penalty followed and Dale had a penalty advantage from the next scrum but Phil Woodhead dived over to score. Tom Barrett notched up the extras to close the gap to a point. How Hinckley had got away without a yellow card or another penalty try during this period was perplexing. It must have troubled the ref as well, as two phases after the restart Mark Deaville was sin binned on half way for an innocuous deliberate knock on! Barrett’s kick to touch was a beauty and Dale had a line out 7 metres out. By now the set piece was purring and it looked like a try but neither official had seen the grounding. Six phases later Barrett sent a drop goal between the posts to take Dale into the lead. 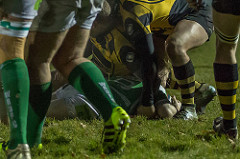 Woody’s try amongst all the bodies

With minutes to go a sliced clearance kick was run back by Hinckley’s Jamie Skerrit who delivered the heartbreaking scoring pass to Mitchell Lamb. All credit to Wharfedale who forced all of the host`s scorers to touch down wide of the uprights and kicker, Joseph Glover, could not find the target once.

Both coaches were happy with the way their teams had played but it was Wharfedale’s Head Coach, James Doherty, who seemed more upbeat. “I’m very proud of our lads. We were in the ascendency all game”, Doherty said after the game. “Our forwards bullied the Hinckley pack, we were unlucky to lose in a game that could have gone either way”.

Hinckley coach, George Chuter, was happy with getting 5 points but they had to endure a “hairy last 15 minutes. Wharfedale had really got stuck in in the second half and it was the first time this season that the (Hinckley) pack had been involved in a real arm wrestle”.

There were many outstanding performances. The front row, Toms Asejevs, Dan Stockdale and Reece Ward, was nigh indefatigable and made light of Hinckley’s “post destroying” reputation. Kieran Frost and Richard Rhodes were a magnificent powerhouse and Frost showed how destructive he was becoming around the park, especially at line outs. Adam Howard, George Hedgley and James Tyson proved to be an effective back row unit.

This was not a devastating defeat as the lads had left nothing on the pitch although it was disappointing not to win. Looking at the relative league positions before the game the travelling faithful would have probably settled for a point before kick off. This is Wharfedale and a Wharfedale side that played some outstanding rugby on the day. The more honest of the Hinckley supporters knew they had got away with one and were full of praise for the Yorkshire side. The travelling faithful were all proud of the lads and there was a gathering to cheer the team off the pitch.

One other thing to note – the team was in good spirits on the journey home and if we need any more confirmation of what Wharfedale is about then it was the appearance in the Skyrack in Headingly of past and present players who were not playing at Hinckley. The ever present Josh Burridge was there to encourage the lads. An enthusiastic Harry Dunne was there and said he couldn’t wait to get back to Wharfedale in the New Year. Lewis Wilson and Jack Barnard had also made the trip to get a touch of the magic that is associated with Wharfedale.

The match photographs are available under the Photos tab near the top of this page – follow the Link to Flikr Album.