Dale secured their third win on the trot in a difficult encounter away at Blaydon. On a wet afternoon they played secure rugby and were worthy winners.

Dale opened in confident mood. Blaydon only had three phases with the ball in the first 10 minutes. The first possession ended with a forward pass and the second saw them kick the ball out for a Dale line out on Blaydon’s 22.

Dale attacked from the start and a clever cross kick was collected and then another grubber was followed up and Kieran Frost was very close to scoring. No try but from the next scrum on Blaydon’s 22 it was all Dale. They even had the luxury of losing a line out but still exerted constant pressure. The Wharfedale scrum was dominant all afternoon and they were rewarded after 10 minutes with a penalty try.

The visitors were soon on the attack again. A towering kick from Barrett was followed up by Tom Mann. He retook the ball and then sent a grubber into Blaydon’s 22. He was quick enough to get to the ball first, collect the ball and slide over the line for a great try. Barrett added the two points. 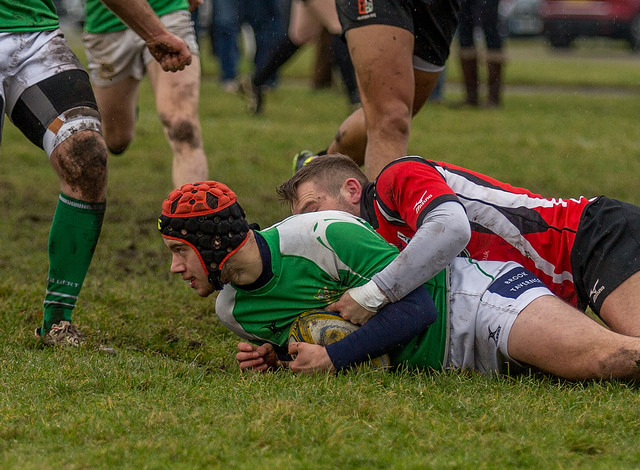 Wharfedale then forgot the lesson they should have learned from the first game against Blaydon at the Avenue. A kick was sent straight to Joel Matavesi in midfield. Given space to use his strength and speed he charged into Dale’s 22 and set up field position for his team. Sustained pressure from Blaydon saw them open their account with a try from Robert Lenderyou which was converted by Joseph Wyman.

Dale replied with energy and resolve. They soon had the ball after the restart and 8 phases only ended with a knock on. The Green Machine drove Blaydon off the ball and a penalty followed which was accepted and Barrett notched up another three points.

Dale finished the first half with strong runs from George Hedgley, Reece Ward and Rhys Lovegrove to again pressurise the Blaydon line. The pressure told and a yellow card was awarded to Matavesi and the Barrett penalty kick ended the first half.

The first part of the second half did not match the first half in Dale’s management of the ball. Mistakes crept in and seemed to allow Blaydon back into the game. There was a chance to extend the lead when Dan Stockdale broke from a maul to touch down but the ref decided that Josh Burridge had been in front and he gave an accidental offside decision to Blaydon.

Blaydon got a second try when Dale were guilty of scrappy play and allowed Blaydon to break. They still had a lot of work to do. They did manage to put 3 phases together and the score came when there was acres of space on the right and prop, Jack Beckwith, had a walk-in try. Joel Matavesi added the extras.

The score gave Dale the nudge they needed. Wharfedale’s third try was a triumph for power play from the whole team. Blaydon were being held in a tight strangle hold and could not find a way to answer the constant attacks from Dale. The onslaught was as fearsome as anything that Dale have mustered all season. Dale put over 40 phases together with Blaydon only allowed the ball to drop out from their 22.

Blaydon seemed to have weathered the Force 10 battering with a knock on by Dale and they had the put in at a defensive 5 metre scrum. They were driven off the ball by the Green Machine and James Tyson grabbed the score. Barrett was again accurate from the tee.

The final minutes were frantic. Dale were striving with every last ounce of energy to get the bonus point and Blaydon were playing for their own sense of pride. Both sides wanted another score and did not want the match to end. Dale came close after a surging run from Matty Houghton was followed by a Phil Woodhead break but the attack petered out close to the Blaydon line.

Wharfedale were unlucky not to get the important bonus point try but that will not matter if they keep winning.

The team congratulated the faithful who had travelled up the A1 to support them. It was indeed a large turnout and the effort was rewarded with a superb, wholehearted performance from the Green Machine. There was a moment of disappointment at the lack of a bonus point but the smiles soon broke out on supporters, management and players at the realisation at what they had achieved. Many of the faithful also wanted to bear witness that the Foresters who had just beaten Blaydon 2nds came over to support. It was cold and wet and they must have been yearning to follow their opponents inside for a warm shower but this is Wharfedale. After the match both sets of players and coaches met in a huddle in the middle of the pitch.

Line outs 10 from 11 inc. 1 not straight and 1 free kick awarded to Blaydon when we won the ball